Why teens’ protests over US gun laws demand serious attention

US students have been making headlines recently for their vocal opposition to the nation's gun laws. And they aren't backing down.

“We are losing our lives while the adults are playing around. You are either with us or against us.”

This week, high school student Cameron Kasky stared down a CNN news camera and issued the above warning to US legislators. He was joined in frame by his classmates including Emma Gonzalez, a teen who had, one day earlier, stood in front of hundreds of protesters and challenged President Donald Trump to take her on:

If the president wants to come up to me and tell me it was a tragedy … I’m going to happily ask him how much money he received from the National Rifle Association. It doesn’t matter because I already know: $30 million!

The kids are revolting — and it’s not just those from Parkdale’s Marjory Stoneman Douglas High.

US teens have been making headlines recently for their vocal opposition to the nation’s gun laws, following the school shooting on February 14 that killed 17 people. Yesterday, on Presidents’ Day, 17 students lay prone in front of the White House to symbolise those who were killed. The protest was organised by a group called Teens for Gun Reform, which is led by two 16-year-olds.

More action is on its way too. On March 13, the Women’s March’s Youth EMPOWER group is planning a 17-minute walkout from high schools around the nation. On March 24, student organisers (including those from Parkdale) will lead March For Our Lives — a non-partisan protest in Washington asking Congress to immediately bring a bill forward to address gun violence. On April 20, the 19th anniversary of the Columbine shooting, another walkout is planned. Yes, that last protest date is 4/20.

It’s details like that last one that have some questioning the discipline and potential impact of the growing protest movement. Former congressman Jack Kingston has publicly accused the young activists of being political pawns for Democrat agitators, and insinuated they were incapable of organising collective action on their own. Conservative commentator Dinesh D’Souza has openly mocked survivors of the Parkdale shooting who were upset by Florida lawmakers refusing legislation on assault weapons. Retweeting an image of crying teenagers, he wrote “worst news since their parents told them to get summer jobs”.

Others have scoffed at the repeated 4/20 reference — how serious can they really be taking this issue, if they’re also making jokes in the same breath?

Regardless of the matter at hand, there’s a lot of baggage attached to our reception of protests from young people. Culturally, we’re accustomed to dismissing youth outrage as empty rebellion. Teenagers are generally seen as a dissatisfied bunch, constrained by the pressures and strictures of the education system, largely without economic independence, often battling the moral or social mores of their family.

Those factors explain some things just fine: a new piercing, an argument with a parent, everything that happens in the film Lady Bird, but it’s baffling to think they apply to something like arguments for gun control or any of the other large-scale political issues young people are passionate about. Frustration about a general lack of power is one thing, frustration about disenfranchisement that has led to the violent death of your classmates and peers is another thing entirely.

The kids aren’t just all right, they’re the most important people to be listening to on this issue. 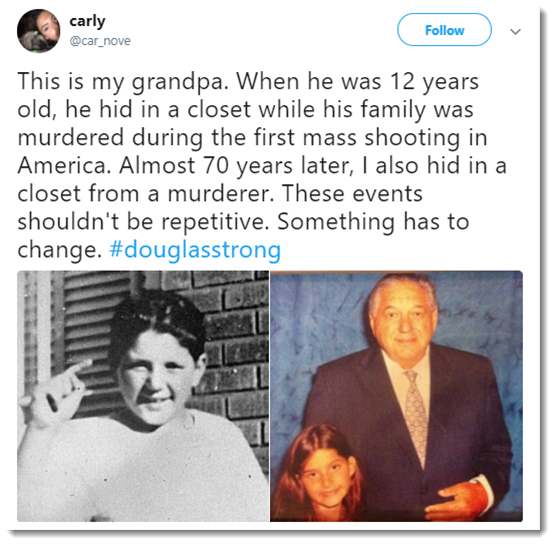 Last year, a 17-year-old gay teenager got in contact with me wanting to write about the then-impending postal survey for marriage equality. Though he wasn’t out to his friends or family, he felt he had to have his say and urge people to use the vote that he didn’t yet have — one which ultimately decided his rights. “Share a few Facebook posts!” he wrote, in an emotional piece published with no byline. “Retweet! Tweet yourself! Social media is magic! Enrol to vote! Vote yes!”

It mirrors a similar statement from Cameron Kasky this week, as he addressed his (or, more accurately, his parents’) federal representatives: “Please do it for me. Do it for my fellow classmates. We can’t vote, but you can, so make it count”.

This is the best-resourced, most informed and engaged generation in our collective history; and they’re coming up against some of the most infantile and incompetent governments in recent memory. Vote or not, we’d be stupid to underestimate them.

This issue calls for mass protest. On the streets, loudly, defying calls to stop and demanding immediate and demonstrable change, not just the proposed tinkering around the edges that are on the lips of political figures.

But, does this generation have what it takes? Tweeting, liking and posting won’t cut it. Feet stamping and name calling from afar won’t cut it.

They need to mobilise, march and prove themselves resolute over time and efforts to silence them. Anything less will fail as all previous attempts have failed.

Your right Richard. But American youth are virtually the last bastion. Whether they get it right, or stuff up we cannot, must not sell them short. Their country is crumbling around them and without doubt they are in the firing line. The next two generations of American youth are tasked with adapting their countries acceptance of change from the pre-eminent position of world leadership, or at least sharing (balancing).

I wonder whether we are perhaps seeing the start of a new cycle of youth protest and political engagement – the late 60s repeating, but perhaps with shorter hair and less dope? Kids are disengaging with Facebook and Twitter. Conversely, they are re-engaging with community through volunteering and activism (Get-Up!, as an example), at the same time as the older generations who would otherwise be the political leaders – late Boomers and Gen X) are disengaging in frustration. There is a real opportunity for youth to step into the vacuum and to be heard (setting aside the scientific impossibility of that statement). Hopefully, not only will they take it up, but they will be supported in doing so by their elders and the meeja.

I agree Richard, in the 60s neither the parents of the conscripts who were dying in a useless war or the politicians seemed able to or even wanted to stop the Vietnam war. It was the student protest movement which in the end made the difference.
And here we are again. Where have the students’ parents been on this issue over the last few years? How many parents were against gun control until they were personally involved? I hope this is the beginning of a groundswell that will spill over state borders and into campuses all over America and force change despite effete politicians and parents.

Unfortunately the 60s student protests did not stop nor slow nor disrupt the increasing militarisation (it all started with a few ‘advisers’) of US society.
At its peak there were in excess of half a million US troops from 1968 until the early 70s.
The end of the draft in 1972 meant that only ‘volunteers’ for the Army would go a’killing abroad and the protests more or less fell away, except for dirty hippies & their ilk.

“But, does this generation have what it takes? ” Let’s hope so, because my generation (X) and the one before it (the Boomers) let the lot slip away.

If a million kids march, I hope we see 2 million parents along side them. Its time.

But isn’t it all too late? there are almost as many guns in the US as there are people, and no doubt this latest atrocity has led to a mass buying spree of even more, and the argument that good man with a gun can stop a bad man with a gun will keep them buying more. The genie is out of the bottle. How do you get it back in?

Yes, Peter, the genie is out and you cannot put it back. But, you can draw a line under it so that it I should not joined by any future genies. You can starve it of oxygen such as parts, ammunition, repairs. You can offer amnesty’s with payment for weapons surrendered (the US remains the richest country on the planet!), you can further incentivise law enforcement to locate and seize weapons held unlawfully (make the ATF bigger, stronger, smarter) and you can increase enforcement of the current laws.

You can work to change the culture from what it is to what you want it to be – think seatbelts, drinking and driving, litter.

You don’t simply have to roll over and accept that it is a Herculean task, you can actually lead change. But that all presupposes that the US has fearless leaders. I’m not sure it does.

“But that all presupposes that the US has fearless leaders. I’m not sure it does.”

… or they may turn out to be the 16 and 17 year olds actively leading this current movement.

But still, with all of the hardware out there, whilst law abiding, concerned, thinking citizens may respond, what about the rest? Not necessarily (or even) the criminals, what about the ‘Hunters’? the discontented? the borderline nutters? the ‘macho he men’? the conspiracy believers? those that believe that “a good man with a gun….”? the religious right? the white supremacists? the jihadists? the methodists?

Students protesting something other than student loans. Who would have thunk it. Maybe the times they are achangin’ again.

Alas, I think that deSouza has a point. Just think of what was built by this cohort upon Occupy…