Bernardi for Batman. New recruit Lyle Shelton has sent out his first correspondence on behalf on the Australian Conservatives and it showcases every bit of the ability to read the zeitgeist and judge the public mood that we came to know and love during the marriage equality campaign:

I’m pleased to announce that Kevin Bailey AM, is our candidate for the March 17 Batman by-election in Victoria. Kevin is a philanthropist, distinguished businessman and former SAS soldier and diplomat.

It’s a measure of our party’s growing stature that we have been able to attract a candidate of Kevin’s calibre.

The Liberals are not running and that is all the more reason for us to give the people of Batman the chance to send a message to Canberra.

That’s right, the Australian Conservatives are running in Batman. That’s the Melbourne seat in which Labor barely held off a challenge from the Greens in 2016, the seat that has caused them to wobble on their line on a coal mine in central Queensland, a seat in which the Liberal party aren’t even bothering to field a candidate. That’s where the Aussie conservatives reckon a hard right Catholic former special forces man is needed. He has claimed, in the Herald Sun, that a Greens or Labor victory would be a win for “skyrocketing debt, soaring electricity costs, gender bending programs in schools and stifling political correctness”.

Is there a computer doctor in the room? The Royal Australasian College of Physicians held their basic training written exam — only to cancel it mid-way due to “an unknown technical error” with their computer system. It affected doctors around the country, who will now have to resit the exam. Even worse, that includes people who had already finished when the system went ka-put.

The exam runs for five hours, only happens once a year, and is a key step for doctors on the way to specialise as physicians (rather than, say psychiatrist, surgeon or pathologist). According to the RACP official statement — which we hear has not been well received — “An unknown technical fault left a significant number of candidates locked out of the computer based system and unable to complete the second part of the examination after their scheduled break today.” It is to be rescheduled, but no details have yet emerged as to when that will happen, only that “It is likely to be more than 24 hours before we can notify candidates of a new exam date”.

“Doctors around the country are devastated — they put their lives on hold to study for and complete this exam, scheduling leave and family commitments and even surgery around this date — only to have it moved”, a tipster told us.

Shoots and leaves. One unexamined element in the Joyce fallout is how it will echo through state politics in his electorate. In the aftermath of the revelations, the Fishers and Shooters Party announced their candidate for the Northern Tablelands — also known as the New England Tablelands — in the next New South Wales state election a full year out from the scheduled poll. They’re fielding David Good, an Uralla local and former cop for the seat currently held by Nationals MP Adam Marshall, NSW’s minister for Tourism.

A tipster tells us the reasoning is that “Joyce will go, there’ll be a byelection, Marshall will be pre-selected and the Fishers and Shooters will have a good chance for his Northern Tablelands seat”.

Finance accidentally lauds Labor’s managerial competence. Crikey‘s preferred PM Mathias Cormann’s career reaches a new peak this week when he acts as leader of the country he only migrated to in 1994 — a great testament to Australia’s migration program and the man’s talent. But his week didn’t get off to the best of starts. His department, Finance, has been criticised by the Joint Committee of Public Accounts (headed by Dean Smith, another Crikey favourite) for an apparently dodgy graph purporting to show a fall in the proportion of government spending devoted to “administrative” (i.e. bureaucratic) resources. Cormann naturally defended his department, telling the Financial Review that, in the reporter’s words, “the data showed just how good a job the Coalition was doing in reducing spending by government departments.”

Alas if you actually dig out the material from Finance it actually shows the big fall in spending by bureaucrats as a proportion of overall spending happened under Labor — Finance’s figures show it fell from 8.5% to 7.2% by 2013. 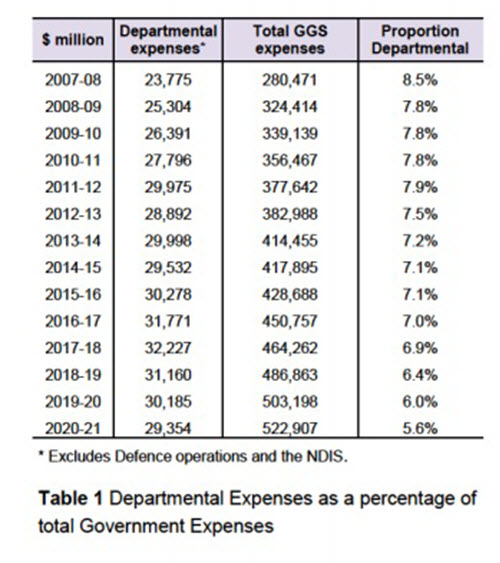 Mean muggin’. Neatly illustrating the old “one day we’ll look back at this and laugh” aphorism, the merchandise at Labor’s South Australian election campaign mines some good old fashioned cringe comedy. Images of the the toe-curlingly awkward press conference involving SA premier Jay Weatherilll and Federal Energy minister Josh Frydenberg in March last year — Weatherill hijacked Frydenberg’s “virtual power plant” announcement to complain of the “disgraceful” way the Feds treat SA — have been emblazoned across mugs which form, as displayed by the ABC’s Nick Harmsen, a kind of cup-based diptych of discomfort: 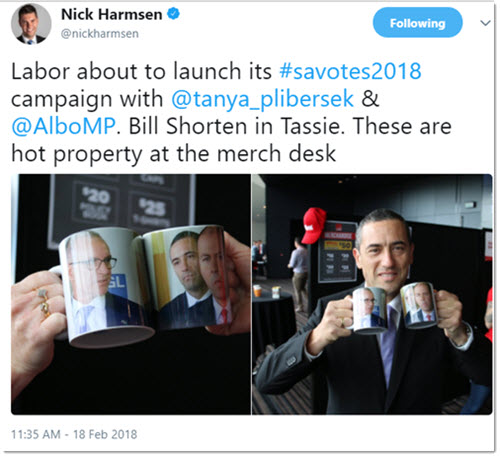 “Cup-based dyptich…”? Stop it – it hurts to laugh too much. Ms Razer would be proud.