The Seven Network has been patting itself on the back for last week's ratings performance, but there are more factors to consider.

Seven’s Winter Olympics ratings spin. The Seven Network has been patting itself on the back for last week’s ratings performance, with a press release and story in The Australian‘s media section today. It is true that the ratings have broken records — the Winter Games, plus MKR and solid performances in regional markets (as well as winning efforts nationally by the News) gave Seven an overwhelming win every night and last week, which flattened Nine and Ten.

But it has come too late to help the December half-year profit which is out tomorrow, or the share price which hovers around record lows at 49 cents on Friday.

But unlike many other Olympic (Summer and Winter) Games broadcasts, these are in real time. South Korea is two hours behind us and that means Seven can start its evening coverage at 9 or 9.15pm as the finals and semis of various events start live in South Korea. Seven will enjoy the same boost from the Gold Coast Commonwealth Games in April. If Seven is still with us in 2020, the Tokyo Games will give them a similar boost, as will the Winter Games in Beijing in 2022.

Rather than the brilliance of the spectacle, the wonderful commentary teams (huh?), or a “new-found faith in TV as a reliable medium of audience reach and engagement for advertisers and sponsors”, as chief revenue officer Kurt Burnette gushed, he should be thanking proximity and meridians of longitude and time. — Glenn Dyer

ABC to vote for new staff director. Voting opens tomorrow in the poll for the NSW representative running as the new staff-elected director at the ABC. Four of the public broadcaster’s most respected journalists have thrown their names in the ring: state political reporter Brigid Glanville, economics reporter Stephen Long, NSW senior journalist Philippa McDonald, and News Radio presenter Tracey Holmes. Queensland union members have endorsed presenter and political journalist Matt Wordsworth as their candidate, and Victorians have chosen Karen Percy as their nominee. The Australian Electoral Commission will run a ballot for the position in March, which will replace the outgoing staff board member Matt Peacock, who has held the position since it was reinstated by the government in 2013.

Domain’s first report nothing to boast about. Shares in Domain Holdings have fallen more than 16% so far in 2018 (dragging Fairfax shares down with it — they have lost more than a fifth of their value this year). Some of that loss has been linked to the weakness in residential property markets in Sydney and Melbourne, and some is due to fear of the unexpected in the wake of the company’s spin-off from Fairfax. But a lot of the losses have flowed from the still not fully explained departure on January 22 of CEO Antony Catalano.

Today’s first interim financial report from Domain showed a less than stellar result. On a “normal” or statutory basis, the company lost money in the December 24 half-year, while on an underlying basis the result was a profit, but nothing to write home about.

The company’s separation and float from Fairfax Media late last year created the various profit and revenue estimates (statutory vs pro forma or underlying). That will continue until the full-year figures in August. For that reason investors will be wary about going the full panic if costs continue to rise sharply.

But ignoring the statutory loss of $3.4 million after significant items (the costs of the separation and float) and statutory revenue of $112 million, Domain’s underlying result was nothing to boast about. Pro forma revenue up 12.5% to $183.3 million. Earnings before interest, tax, depreciation and amortisation of $56.8 million, up 8.7% were the highlights and played up by management. Left unnoticed was the 2.7% fall in earnings before interest and tax (EBIT) and the 8.1% slide in after tax profit to $24.7 million. — Glenn Dyer

Inside Russian “troll factory”. The US has indicted 13 Russians associated with a “troll factory” that allegedly interfered with the presidential election. The Washington Post has interviewed a teacher who’d worked in the “commenting department” of one of the factories, who described the place as Orwellian:

I arrived there, and I immediately felt like a character in the book 1984 by George Orwell — a place where you have to write that white is black and black is white. Your first feeling, when you ended up there, was that you were in some kind of factory that turned lying, telling untruths, into an industrial assembly line. The volumes were colossal — there were huge numbers of people, 300 to 400, and they were all writing absolute untruths. It was like being in Orwell’s world. 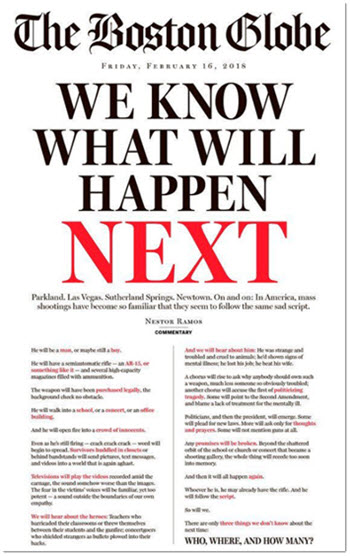 Glenn Dyer’s TV Ratings. More of the same from last week. It was Seven’s night, thanks to the Winter Games’ 1.29 million nationally, with a further 1.34 million watching on 7mate up to 8.40pm, so the total audience for the Games boosted the network past Nine, which had led with Married At First Sight which got a record 1.85 million nationally and 1.35 million in the metros in the same time slot. That, in turn, easily topped My Kitchen Rules 1.69 million nationally and 1.13 million in the metros. 60 Minutes followed Married at 8.40pm and averaged 1.167 million nationally with the nice, stagey, family first report on Prime Minister Turnbull and his wife. That ran behind the Games coverage which opened a bigger margin after 9.40pm.

“South Korea is two hours behind us …”. That’s odd, I thought they were one hour ahead?

I’m pretty sure Channel Seven were aware of the time zone serendipity when they bought the rights and built around having the rights. The sour grapes writing that treats it as if it’s some lucky bonus that they just stumbled onto this week and have no right to celebrate is a bit odd.

The Boston Globe front page is sublime. Excellent choice for Front Page of the Day. Best I have seen.