The chance to influence the Nationals' policies can be yours for just a few thousand dollars, and you don't have to declare it. But don't count on meeting Barnaby.

Header of the Nationals’ fundraiser invitation

With exquisite timing, the Nationals have sent to Australia’s corporations and lobbyists an invitation to a party fundraiser to be held just days after a crucial meeting that could have leader and controversy magnet Barnaby Joyce dumped.

The March 2 fundraiser is planned to be held at the perhaps aptly named Vibe Hotel in Canberra and invites corporate Australia to influence the party’s policies at the cost of several thousand dollars each. 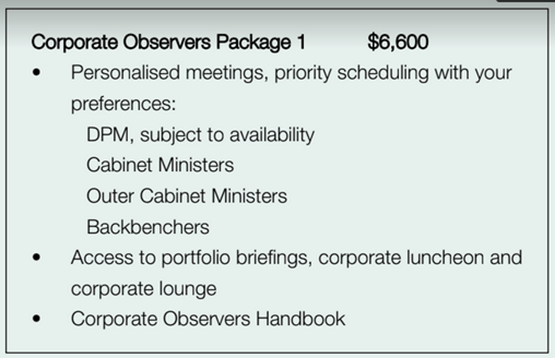 Top-tier donors will have the Nationals juggle their schedules in order to fit in with their priorities, though caveat emptor might apply for purchasers of the “Corporate Observers Package 1” (for $6600) which enables donors to meet Barnaby Joyce. “DPM, subject to availability,” the package offers, which given the potential for Joyce’s removal between now and then, appears accidentally but perfectly phrased. Donors can also purchase packages for $4400, $2200 and $1100, and it includes a “networking luncheon”.

The package costs reflect the fact that GST is included — thus meaning that buying access to this event is not a “donation” for the purposes of Commonwealth electoral funding laws, and doesn’t have to be declared by donors, because it is a purchase of a good or service. The packages are also well below the Coalition-mandated disclosure threshold of over $13,500, meaning the Nationals don’t have to declare them either.

The fundraiser offers access not merely to Nationals ministers but Nationals MPs such as George Christensen and ministerial staffers as well. “Personalised meetings will be scheduled with your selected Ministers, MPs and Senators and Senior Advisers to present your key interests, 8am to 3pm.” Nationals media advisers apparently aren’t included.

Can we please start calling this what it is: corruption. It’s rife across most parties and now regarded as normal practise. But we taxpayers employ these marquee drawcards, and it’s their public employment by us alone that makes them saleable to private-corporate customers.

This should be illegal. MP’s are selling something that isn’t theirs to sell. Is there a legal mechanism by which we can challenge it? Or at least get a slice of the action?

What on earth is a ‘Corporate Observers Handbook’ & how have I survived these past decades without one….

“The Nationals are using our influence in government ….”
How do they get to use ‘our’ influence? Or is it the case that they have trouble with the English language (amongst other things)?

come to the nats party, throw in a few dollars and tell us what you want , everything is on the table,would you like 100 million dollars of water free, no trouble, just write us a cheque.

So $6K is the going rate to buy a pollie?

Perhaps the electorates might chip in and buy a couple to represent OUR interests for a change?

$6K is the entrance fee to the showroom. If you want to buy any of the goods exhibited you’ll have to be prepared to stump up much, much more.