How ironic, an ex-coal industry spinner doesn’t know when to stop digging.

With Labor turning against Adani (kinda, sorta), supporters of the beleaguered, cash-gouging, proposed environmental catastrophe of the Carmichael mine, have swung to its defence (save for ex-Labor hack Cameron Milner, who has gone vewwy, vewwy quiet).* Brendan Pearson was quick out of the drop-cage in an AFR piece on Thursday.

Pearson is former CEO of the Minerals Council of Australia, cough coal lobby cough,** now free to do a little culture warring, freelance. Pearson compared the electorates of Batman (inner-city Melbourne) and Dawson (coastal Queensland, south of Townsville), and damned the former for opposing the Adani Carmichael coalmine.

The piece was a masterpiece of bad reasoning, of course. Indeed, Pearson has been denounced by the AFR itself (of which he is an alumnus) for spruiking “fatuous drivel” about the long-term viability of coal.*** But the op-ed section published him anyway. “The multi-decade hit to living standards will be felt far away in regional Queensland communities,” Pearson opined, of the now-almost certain death of Carmichael.

Drivel, of course. Carmichael would have delivered less than a thousand jobs to the state; had they succeeded in their search for Chinese capital, it would have been less than that, as sub-contracting would have gone overseas. Dawson is now primarily an agricultural and tourism centre, and the two are synergised, with thousands of backpackers coming through to see the reef, hang out in Airlie Beach and other coastal towns, and pick fruit. The area now depends far more on that for its future — and on a clean and natural image — than it does on dying mines.

The farmers oppose Adani’s preferential deal on water rights, which they say will suck the region dry. The tourism industry is opposed too. In 2017, Whitsundays Tourism ruled out further co-operation with Adani, after two winners of its tourism awards knocked back the gongs, as they were sponsored by … Adani. They’re working with homegrown environmental groups of decades-long standing.

Nor is there any indication that Adani is now a vote-winner in Queensland — or that the gains in opposing it are limited to a few inner-city electorates. A poll last year showed that 70% of Queenslanders were opposed to Adani receiving a state government “loan” for a rail line, and also wanted the government to veto any federal funds. Most striking was the party split: 82% of Greens, 77% of Labor voters, and 74% of One Nation voters. Even Coalition voters were majority opposed at 60%.

Pearson’s attempt at full-on culture war are almost touchingly lame. The good people of Dawson volunteer more than those hipsters in Batman, Pearson notes. Well, of course they do — because the Newman government cut public funding so much that services collapsed in regional areas, so volunteers had to step in. When this correspondent was in Dawson last year (Pearson was a visiting scholar in Cambridge at the time, studying coal mines there), everyone nominated services cuts as the reason that the pro-Adani LNP government of Campbell Newman lost power after a single term.

Best of all is Pearson’s go at a latte-left thing. “The undeniable fact is that across virtually every indicator, the well-caffeinated electors of Batman …” Hahahaha. The Minerals Council Office is in Sydney Avenue, Canberra just behind Parliament House. When Pearson was presiding over the MCA, he was but a short stroll from a variety of purveyors of the demon bean: 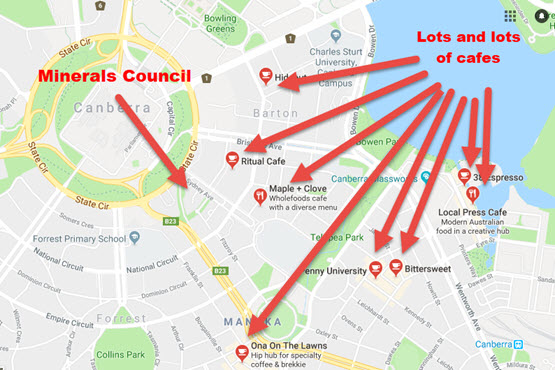 Ritual Café on National Circuit was less than 200 metres away; as was Maple and Clove, with its famous Choc Almond Butter smoothies; five minutes away in Manuka, there was Ona on The Lawn (“hip hub for speciality coffees and brekkie”) and Down Town Milk Bar.

Finally, just to the north, there was the famous HideOut. Pearson might have made use of that when BHP’s Michael Alexander came to town and told the MCA that it was them or Pearson: if this coal-digger wasn’t put on the slag heap, BHP Billiton would withdraw from the peak body. Soon after, Pearson was in Cambridge where, we understand, there is coffee.

How ironic, that an ex-coal industry spinner doesn’t know when to stop digging. Whether the mining industry is out of the PR hole that Pearson and other coaltopians have put it in remains to be seen.

**cough due to black lung, the mining disease wiped out after decades of union struggle, and which has re-appeared in Queensland miners in an era of deregulation, FIFO and casualisation.

***hilariously Joe Aston, who diarised Pearson’s demise, is as clueless on this as the man he’s slagging off. “We must qualify this juxtaposition by noting the tragic alignment of adult capital custodians with conservationist bums — the odd one from their palatial Point Piper residences — fighting for mass unemployment and a return to candlelight.” Yeah, coal employs 0.5% of workers in total, offshores 90% of profits, and displaces more jobs than it creates. Poor old Joe, cutting-edge journo of 1977, the Greens were right, and he hates it.

The Carmichael mine would also impact on current coal mines operating in Oz & affect employment in those areas.

Guy – you forgot the excellent Brindabella Cafe, downstairs outside the restricted areas at DFAT. Drive down Sydney Ave between 8 and 9 any weekday morning and count the caffeinistas crossing with shots in hand.

Thanks DF
Im far less caffeinated than the good burghers and lobbyists of Barton, so missed Brindabella altogether. It’s a little Seattle on Burley-Griffin, innit G

I’m curious about the 18% of Greens who support Adani.