There will be no real winners in the SA election

In politics, the worst crime a leader can commit is to lose the unloseable election.

John Hewson managed it back in 1993, and it proved a terminal blow to his authority, not to mention setting the “big target” political strategy back so far that it still hasn’t really recovered.

And, of course, Steven Marshall pulled it off four years ago, although he was largely absolved because by the end the 2014 state poll resembled less an election than some long-lost Franz Kafka novel, and because there was no one else who could credibly lead the party anyway.

Since we mention Hewson, it’s now a matter of political folklore that his campaign was derailed because he put out detailed policy far too early, allowing Paul Keating to tear it to shreds. Which is one reason why, these days, we rarely hear a peep about policy from Oppositions, almost until you’re literally walking into a polling booth and they’re running up to you trying to explain their detailed four-year plan.

And, to be fair, I can see where they’re coming from.

Among other bits and pieces, the Labor Party unveiled three election pledges: it will, it says, spend $200,000 at local surf life-saving clubs “to trial new shark surveillance and deterrence technology”, including, of course, drones. It will appoint an Aboriginal children’s commissioner. And it will build a new park ‘n’ ride for 350 vehicles at Paradise interchange.

Now, it may just be déjà vu, but all this sounds kinda familiar.

Possibly because the Libs already promised to fit out each of the state’s surf lifesaving clubs with a drone in a $200,000 pledge back in November.

And then in December, they said a Liberal government would establish an “Assistant Commissioner for Aboriginal Children”.

And, of course, in January they pledged a $7.5 million park ‘n’ ride to add more than 300 parking spaces at Paradise interchange.

Which means Labor’s new campaign slogan should probably be: “Anything you can do, we can do too.”

Or, given they’ve chucked in an extra $12 mil for various other infrastructure goodies: “Anything you can do, we can do better.” Or at least more expensively.

It shouldn’t be forgotten, of course, that they already pledged the park ’n’ ride at the last election, only to ditch it once their late-unlamented carpark tax hit the wall, a move they probably didn’t ponder much at the time since the relevant seat of Hartley had recently fallen the Liberals’ way and was unlikely to swing back to Labor anytime soon.

Along comes a local resident named Mr N. Xenophon, and Labor, it appears, has had a change of Hartley.

All of a sudden, they’re all too keen to spend buckets of cash in this Liberal marginal.

But if the Libs have a right to feel enraged that Labor is systematically adopting their entire program, their weekend utterances hardly show it.

Indeed, the first retort to Labor’s announcement from the SA Liberal Media Twitter handle — as ever, more phlegm than phlegmatic — was a crack at Nick Xenophon:

It was a similar scenario when Labor evidently ripped off another Liberal pledge, to roll out a phonics check across SA schools, to which shadow education minister John Gardner himself responded with — you guessed it — a crack at the SA Best leader: 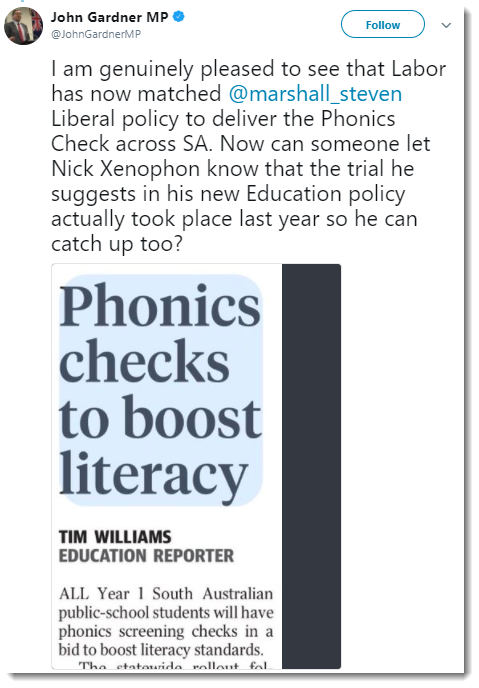 It’s not really the done thing to reference Tarantino these days, but it’s kinda like the end of Reservoir Dogs — one guy fires a shot at another guy, who responds by shooting a different guy standing nearby. The net result: everyone gets hurt.

If nothing else, it’s a sign of how the traditional battlelines have been frayed by SA Best’s emergence.

It’s likely neither Labor nor the Libs would have bothered spending the sort of cash they’re throwing about in Hartley were it not for Xenophon — the seat would have been pencilled in as a ‘Liberal-retain’, and everyone would have gone about their business accordingly.

But it’s not just Hartley cashing in.

Last week, SA Best pledged to ensure the Penola bypass would be completed if it held the balance of power, a $4.5 million commitment in the nominally safe Liberal seat of MacKillop. Marshall had visited the electorate himself in December and hadn’t committed to funding the project — what a missed opportunity!

It’s possible, of course, that the Libs were planning to roll out their own commitment when they were good and ready, and were caught napping — but this election is, more than ever before, all about timing.

Go too early and you’ll see your agenda cynically appropriated and enhanced by one political opponent.

Go too late and another political opponent will steal a march — and possibly steal March.

But then, this whole campaign is genuinely ludicrous, with both Liberal and Labor camps feigning fiscal rigour, despite everyone knowing both will, naturally, squib their costings under the cover of that old chestnut — a public service “efficiency dividend”.

And Xenophon, meanwhile, is pretending to have actual across-the-board policy positions, as opposed to his more traditional feelpinions.

In many cases, he is literally putting out policies not because he thinks they are worthy ambitions for government, but because he’s worried that if he doesn’t, people will say he doesn’t have any policies.

Which means the major parties have him rattled.

Read the full piece at InDaily.

Perhaps your correspondent should be reminded that before the last election Bill Shorten made well thought-out promises at regular intervals, which drove the government apoplectic, but resulted in his almost winning an election that was supposed to be a walkover for Turnbull. As far as I can see he has been doing much the same ever since while the government runs around like so many headless chooks.