Contrary to an extensive New Matilda article and an errant line in an ABC report, barrister Charles Waterstreet has told Crikey he has not lodged any defamation proceedings against a woman who accused him of sexual harassment.

Waterstreet hasn’t sued for defamation. Contrary to an extensive New Matilda article and an errant line in an ABC report, barrister Charles Waterstreet has told Crikey he has not lodged any defamation proceedings against Tina Huang, a woman who has alleged sexual harassment against him (which he denies). 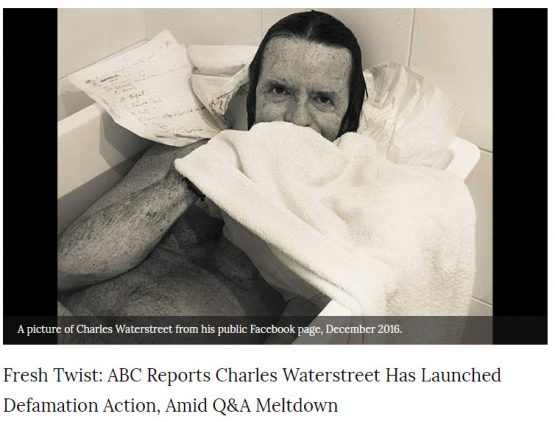 In its report yesterday, New Matilda quoted from an ABC article on Waterstreet’s withdrawal from his controversial place on the panel of a special #MeToo episode of Q&A. In that story, one line says that Waterstreet had started defamation proceedings against Huang. It’s not clear where the ABC got that information.

Waterstreet has previously stated he could sue for defamation in response to the sexual harassment allegations.

New Matilda editor Chris Graham told Crikey he contacted Waterstreet by text message to check whether he was suing for defamation, but didn’t receive a response. He said he also called the ABC twice to check their reporting but he could only get through to a voicemail, where he left messages.

Fact check. Since yesterday’s school shooting in Florida, one very sombre statistic was being used by news outlets around the world (including Fairfax’s Rachel Olding and Rachel Clun in their report): that this was the 18th school shooting in the US so far this year. But the figure relies on an inflated number from a non-profit group that lobbies against gun violence. The Washington Post reports that the site has long inflated its school shooting tally — the feature it is most famous for:

Take, for example, what it counts as the year’s first: On the afternoon of Jan 3, a 31-year-old man who had parked outside a Michigan elementary school called police to say he was armed and suicidal. Several hours later, he killed himself. The school, however, had been closed for seven months. There were no teachers. There were no students.

How many more? Newspapers in Florida dedicated their front pages to the attack. 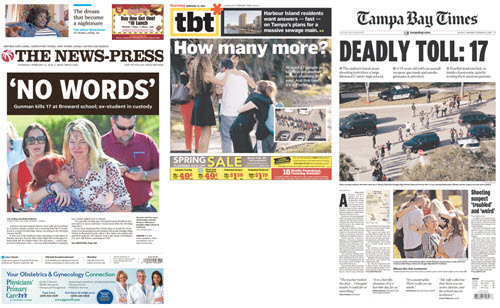 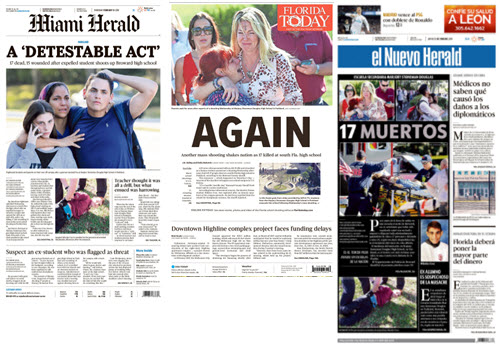 Video of the day. Hats off to Seven Sydney newsreader Mark Ferguson for rattling off the name “Meow-Ludo Disco Gamma Meow-Meow” (yes, really) without skipping a beat. 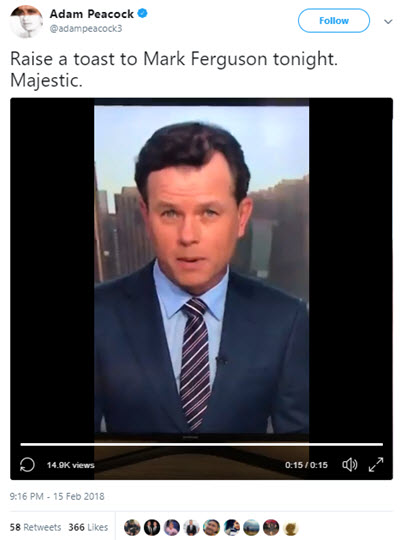 Glenn Dyer’s TV Ratings. MKR (1.46 million viewers on Seven) and the Winter Olympics (1.75 million on Seven and 7mate) simply swamped the competition last night — the clever programming on the main channel from 9pm (meaning it could go live, reaching 1.30 million nationally) and before that the feed on 7mate from 5.30pm to 9pm (442,000) again crunched the opposition. All those cheap jibes in the legacy media and from rival networks about how the Games are going unwatched with falling audiences are not being backed by the numbers and the demographics.

The Project on Ten at 6.30 and 7pm had a very weak night — so much so that the metro audience for the latter part averaged 396,000, the first time it has been that low (outside of summer) for ages. Ten News with 430,000 actually had more metro viewers from 5pm to 6pm than The Project did at 7pm. The 6.30pm part of The Project saw its metro audience dip to just 287,000, which was also very low. The national audience for the 7pm part was 619,000. It used to get that in the metros alone on some nights.

New Matilda are obsessed by the Waterstreet thing, it’s blown out of all proportion. Very suspicious. I notice they boast substantial sponsorship from a legal firm, one convicted of unethical behavior itself. I smell a conflict of interest.