Loose units. Liberal Democratic senator, first attempt at Bond villain Halloween costume, and knee-slapping massacre-related zinger delivery system David Leyonhjelm has formed a “loose voting block” with Australian Conservatives’ Cory Bernardi and One Nation dumpee Fraser Anning. The move was announced in his newsletter, saying “with three of us working together on issues of agreement, the government will have no option but to talk to us at the same time as it talks to the Hanson and Xenophon groups. We will be a first port of call for the government rather than a last resort”.

It will be interesting to see how this pans out; Leyonhjelm notes their disagreements “on social issues”, perhaps best illustrated by the topic of the burqa. Bernardi, who spent much of last year’s marriage equality debate bleating about religious freedoms, wants the Islamic religious garb banned in Australia. Leyonhelm, on the other hand, has said the government shouldn’t dictate what people wear, after all “they might ban things that I like, like bikinis“, thus demonstrating his consistent commitment to defending the personal freedom to be rather icky.

Even so, it’s worth noting that in the first “Weekly Dose of Common Sense” newsletter Bernardi has sent out since the block was announced, Bernardi doesn’t mention Anning or Leyonhjelm, preferring to focus on “the fatuous, gossipy swamp that the present gaggle of politicians and media have created”. 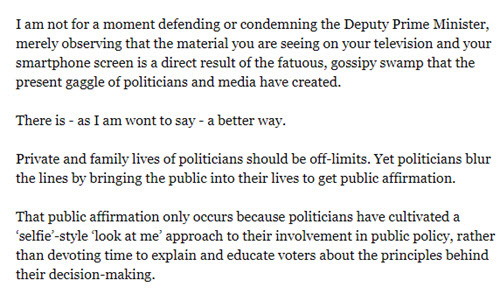 ACL back in form. The Australian Christian Lobby, erstwhile employer of Bernardi’s other new chum Lyle Shelton have been busy rebuilding since his defection to the Australian Conservatives. A Crikey tipster who is on their mailing list shared with us the recent correspondence from their outgoing and incoming leaders.

“There is a shaking at the core of our nation as a result of the change to the marriage law”, Shelton writes — an assertion in Ms Tips’ estimation that really requires a citation. He then goes on to explain his decision to go into partisan politics: “Things are only going to get harder from this point and the Christian response must include more Christians working directly in the parliament.” This is followed by correspondence (recreated on the ACL website) from his replacement, Martyn Iles, in which he says, among many other things, that in South Australia, “a university student was suspended after praying with a friend”. Can any Crikey readers confirm this? Ms Tips can’t find a thing about it and there’s no link in his piece — sign of the politically correct media ignoring Christian suffering to push the rainbow agenda, and nothing else, we’re sure.

Poll after poll after poll in New England. As Fairfax has reported, polling shows approval for Barnaby Joyce has plummeted in his electorate of New England. We understand that, as if he didn’t have enough problems, stories of that nature are far from done. A tipster who lives in New England tells us they have been “contacted three times for a survey on my opinion of the recent disclosures regarding Barney the Beetroot and his extra marital activities. My thinking is we may be going to another by-election soon”.

Tweetie bird. Peter Dutton became the third person in the world (behind Bernie Sanders and Ms Tips’ grandmother) to print out and aggressively brandish a tweet yesterday. Open call out to anyone who can confirm he tasks a staffer with printing out his entire feed each morning and reads it like a book from the above binder. We can dream. 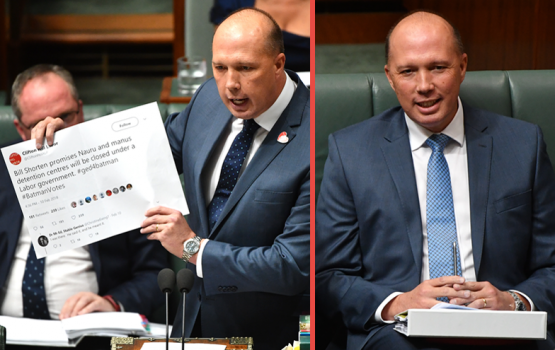 *Heard anything that might interest Crikey? Send your tips to boss@crikey.com.au, use our guaranteed anonymous form or other ways to leak to us securely.

What ever happened to Joe Bullock?

I have great hopes for the fusion of Lyle & Corey – will they have a love child to call Bernard Shelton?
On reflection however, I was enthused by a power ticket in 2016 of Trump/Palin – how we all laughed.