EXCLUSIVE: the very secret and official cables of Alexander Downer

Crikey can reveal restricted cables leaked from the office of the High Commissioner regarding the discovery of Donald Trump's Russian connection, via satirist Ben Pobjie

Crikey can reveal restricted correspondence from the office of soon-to-be-former High Commissioner Alexander Downer to DFAT regarding the discovery of Donald Trump’s Russian connection, as obtained by satirist and anonymous source Ben Pobjie.

Have been hanging around a lot of cafes. Offering cigarettes to a lot of mysterious-looking ladies. None of them tell me anything interesting, though. This High Commissioner stuff is not all it’s cracked up to be.

Had dinner with the Queen. Asked her if she knew anything about Trump, but she pretended not to hear me. Tried to slide her a note under the table, but was removed by guards. It’s a real nanny state here.

Have been chatting with a lady called Olga. Not quite sure what she knows, but she has a great accent. Just like a Bond girl. It’s amazing. Everything she says sounds like a state secret!

Very exciting development: Olga is involved with George Papadopolous, and says she can get me a meeting with him! I’ve wanted to meet him for years — hoping to get some great gossip about the Clintons!

Wait, no…that was George Stephanopoulos, wasn’t it? Bugger. No idea who George Papadopoulos is. Some boring little wonk I assume, some kind of diplomacy groupie. I have to meet with him now though, already sent the invitation. Better not bring any plates! Because of the Greek thing? Ha. 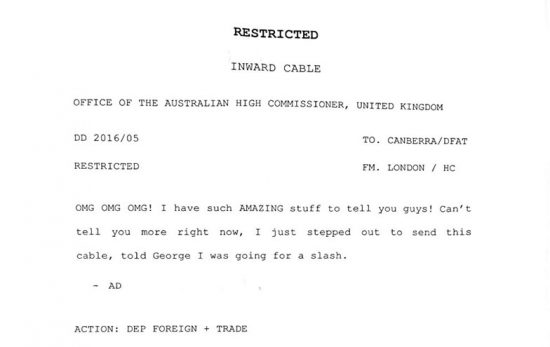 I love you guys…I really do. I love DFAT. Did you know you have “FAT” in your name? Hahaha. The Things That Fatter. Hahahaha.

Ugh. Just woke up. My HEAD. Can’t believe I drank so much. Anyway, George Papadopoulos was VERY forthcoming after the eighth or ninth bottle. Shocking things I have to inform you of, but I’m afraid of these channels of communication being compromised. Send someone you trust to the parking garage at 59 Stapleton Street, London SW7. I will be wearing a chimney sweep’s outfit. Tell your operative to greet me with the words, “Hanging should be brought back but only for gulls”. I will respond with “Algae is my wife, but I am not immune to temptation”. I will then pass him the documents.

Well that was a gigantic cock-up wasn’t it. I waited all day in that garage. Where the hell were you?

No I wasn’t joking! This is international espionage we’re talking about here! I have sensitive information that may put my life in danger!

Well I find that response in very poor taste. Do you want to know this stuff or don’t you?

Fine, be that way.

You see? You SEE? See what Wikileaks is doing? This is what I was TALKING about! This is what George Papadopoulos told me about! Remember? The Greek guy? The massive blowout in my expense account in May? Let me know if you’d like more information.

OK so here’s the thing: George told me that he knew about a Russian dirt file on Hillary. Thousands of hacked emails, and the Trump campaign was all set to use them. Wikileaks, Trump, Russia – they’re all in cahoots! And I uncovered it! Me, Alexander Downer, working alone, behind enemy lines, in extreme danger, with no regard for my own safety, slipping from shadow to shadow as if ‘twere a sly panther and not a razor-sharp Adelaide diplomat. And to think only last month Julie called me a puffy-faced cretin. Well who’s puffy-faced NOW, Julie?

So now you know. Now. What’s my next assignment? I’m thinking Istanbul. Or Prague. Let me know, I can be on the plane tomorrow.

The secrecy around Witness K is not for national security. It’s for face-saving

To breach his own

Being electronic, the one good thing one can say about this “satire” is that it’s not a waste of paper.