It was all back-door deals and prime-ministerial jumping castles in Canberra this week, writes Senator Derryn Hinch.

Chutzpah. It’s a word I use a lot, after a decade living in New York. A Jewish/Yiddish word that many Australians can’t pronounce or spell.

The best definition I ever heard came from that redoubtable Israeli prime minister, Golda Meir. Her example of chutzpah was the Jewish kid who murdered both his parents and pleaded for mercy on the grounds that he was an orphan.

Enter Jacqui Lambie. What “hoots-pah” she’s had recently. She dramatically sacked her Jacqui Lambie Network Senate replacement before he was even sworn in, on the grounds he breached the values of “mateship, respect and integrity”.

Apparently, after the High Court cleared the way for Devonport mayor Steve Martin to replace dual-citizen Lambie, the ungrateful sod refused to stand aside and give JL her seat back.

She said, “He made promises that he couldn’t keep and he couldn’t be trusted, it’s as simple as that.”

Hang on a flash. Promises? Trust? Wasn’t Lambie elected by Tasmanian voters as a member of the Palmer United Party with some of her campaign costs paid for by Clive Palmer? And didn’t she dump him once secured on the red leather benches? Aah, chutzpah. A sometimes perfect word.

Back in 1998 that Labor lion senator John Faulkner put up a proposal about senators’ six- or three-year terms in office after a double dissolution. It was section 282 of the Commonwealth Electoral Act 1918 — known as Bob Hawke’s “fairness” system — under which an AEC recount would treat the numbers like a regular half-Senate election and the first six candidates past the post would get six years.

Then-special minister of state, senator Michael Ronaldson, put up a similar motion in 2010 and the Senate again voted in favour of it. But after the 2016 double D, the majors got together and did a dirty deal. The fix went in, in Victoria and NSW.

I’ll admit this report is biased because I was the Victorian candidate who got shafted. According to an AEC, “Results of the Victorian section 282 recount”, tabled in the Senate August 10, 2016, the six-year termers were (in order) Senators Fifield, Carr, Di Natale, McKenzie, Conroy, Hinch.

But, under the constitution, it is for the Senate to decide on the carve-up after a double D. So, in Victoria, Labor supported the elevation of Liberal Senator (now President) Scott Ryan to the sixth spot, and the government supported the upgrade of Labor Senator Deborah O’Neill at the expense of the Greens’ Lee Rhiannon.

With the High Court sending a plethora of potential independents to the chamber, the big boys decided to formalise the bastardry this week — and did by a vote of 40-11 (see below). 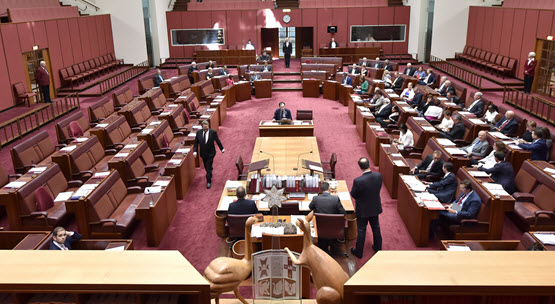 But don’t be fooled by the Greens voting with me and new Tasmanian independent Steve Martin. Richard Di Natale huddled with government strategist Simon Birmingham to make sure he could publicly vote No while the Yes win was safe. In a grubby internal deal, the Greens privately rejected section 282 so they can pull new boy Jordan Steele-John back to three years and give the six-year slot to veteran Rachel Siewert. Martin has already suffered a similar haircut to me. The Libs pushed him back to three years to give their own David Bushby six. And former senator Richard Colbeck had his new term trimmed to three years so fellow Taswegian Jonathon Duniam could have six. They play dirty.

I had my say last week about the tawdry Barnaby Joyce saga but this week it turned out to be a (belated) story which keeps on giving. I’m told an alternative headline was considered to the Telegraph’s Walkley-bound “Bundle of Joyce“: “Bun-aby in the Oven”.

Speaking of the Tele, and their page-one pic yesterday of Barnaby apparently perving on his mini-skirted then-media adviser Vikki Campion: it reminded me that politicians should regard such opportunities as a solar eclipse. You must not look at it. Especially when there’s a camera around. Which is always, in the days of mobile phones.

Prime Minister Turnbull and Lucy put on a family barbecue at The Lodge last Sunday. For their family — and politicians and their families. Beetroot Barnaby was a noticeable absentee. It was an acknowledgement by the PM that families do it tough when a father (or mother) elects to chase a career in Canberra. There was a jumping castle, a mini-zoo, ice cream wagon, doughnuts and heaps of snags. The Lodge itself was also open for guests to inspect.

My executive assistant, Annette Philpott, asked me if I wanted to go inside for a tour. “If I’m not going to live there,” I said, “what’s the point?”

Such a yatebedam you think you are, you kuppe drek – coming to praise Sexual Harassment Tomato until you realise you’re the shtunk standing in that corner alone, because even the rest of that shandoiz has standards.

Your testicles are sultanas and your penis is a noodle!

Too kind.
Wayyy to kind.

Read any good legislation lately? Done anything worth your overgenerous salary? Enhanced the world in any way, however small?
..chrripp, chrriripp

Derryn, do it tough bullshit. Survive as a useless prick of a minster and get a big pension and a cushy job with a foreign company for doing bugger all, ie Robb. Yes you have to go to Canberra, where you get paid generous accommodation allowance even if you own the house via negative gearing in your wife’s name. Meanwhile the FIFOs get nothing like the salary, have 1 week home a month, get none of the allowances and can’t create a job for their pregnant girlfriend. For gawd’s sake grow up.

If only there was a perfect word for you DH but there’s just too many and they’re almost all too rude to print.