Satirical news website The Betoota Advocate has announced it will launch a podcast. Plus other media tidbits of the day.

Betoota Advocate launches podcast. Satirical news website The Betoota Advocate has announced it will launch a podcast. In a press release from their chosen platform Acast, there were few details about the offering, other than suggesting the podcast would be available for a daily commute and might focus on crime and sport.

Front page of the day. Romance is not dead in the Top End. The NT News has shared its display poster for Valentine’s Day: 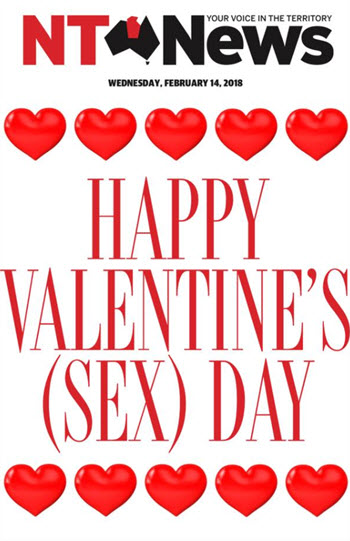 News Corp’s black hole. Missing from the News Corp profit reports late last week and the commentary in the staff newsletter (AKA The Australian) was an update on the $120 million black hole that has opened up the empire’s UK operations based in London. The Sun‘s Sun Bets joint venture with Australia’s Tabcorp continues to leak millions of dollars in losses a month. So bad is Sun Bets’ performance that Tabcorp has been forced to provision a total of $52 million (that is, put aside in its accounts) for what is increasingly looking like stage door left exit ASAP.

Not a word about that in the News Corp December quarter profit announcement or the more detailed filing with the US Securities and Exchange Commission.

Sun Bets has been under review now for more than a year, to no avail. The losses keep rolling out and making a mockery of the much-trumpeted diversification away from newspaper print ad and sales revenues (the same lacklustre returns are being reported from News Corp papers and Foxtel here in Australia).

Last August in its 2016-17 profit statement, Tabcorp revealed it would have to pay News about $46 million in total for Sun Bets. But Tabcorp has an out which it will no doubt exploit. Under the deal with News, if revenue does not reach those respective payment figures and future targets are not agreed to, Tabcorp would be able to terminate the business at the cost of $2.5 million plus winding down costs. That’s what the $52 million in provisions is all about. The axe is about to fall. — Glenn Dyer

Sporting rights slide. Cricket Australia reportedly reckons it can get $1 billion for the rights to international and Big Bash cricket (men and women), and Tennis Australia thinks it can double the $200 million it currently receives from the Seven Network for the summer tennis tournaments including the Australian Open. Good luck because global sporting rights have just taken an almighty hit with the TV rights to the English Premier League falling in the auction that is in its final stages in London for the 2019-2022 seasons. Along with the 15% slide in NFL audiences in the US (and the smallest Super Bowl TV audience in eight years), the days of double digit increases in sports rights are over.

Sporting groups are holding out the prospect of Facebook, Amazon and Netflix bidding for the rights to keep prices rising, but the hard-headed sporting groups with experience (such as the UK Premier League) know the only way to get a huge, measurable audience is via old-fashioned linear TV — free-to-air or subscription. The Premier League held talks with tech giants, including Facebook and Amazon (which holds the UK rights to global tennis for the next five years) but UK media reports say it is not clear if they ended up being part of the various auctions for packages of games. Sky and BT retained the major packages, at substantially lower costs — 16% in the case of Sky.

Sky has cut the average cost per game by 16%. It remains the number one broadcaster and needs more games than other broadcasters because it has 10.5 million UK subscribers, most of whom bought Sky for the soccer coverage. If Sky had been unable to obtain the largest share of the contract, its value would have fallen in the Fox carve-up. BT retains its favoured early evening package of games at a cost 8% or so less than the current contract. –– Glenn Dyer

Glenn Dyer TV Ratings. For yet another night, Seven’s broadcast of the Winter Olympic Games from South Korea has hit the ratings jackpot. Starting at 9pm, late in prime-time, The Games coverage gathered a national average audience of nearly 1.3 million viewers, which swamped the other networks and gave Seven an easy win on the night. But there was a further 419,000 that watched the Games on 7mate until 9pm, so the real audience across the two Seven channels for the Games was over 1.7 million people.

The Winter Games though did viewers a great service: it squashed Nine’s latest attempt to get into another dating genre reality show — it’s called Date Night and ran for half an hour from 9pm — 735,000 nationally. It lost half Married at First Sight’s audience, many of whom went to the Games. It was followed by the grubby One Night With My Ex at 9.30pm – 313,000 nationally, while at 10.30pm, Beauty and The Beach got 138,000 nationally. That’s almost fade to black territory. No wonder Nine is putting them on against the Games.