What role has Tony Windsor played in Barnaby Joyce's downfall?

@Barnaby_Joyce Time to go , but before you do you might apologise to my wife and my now deceased Mother for your disgraceful behaviour and to the many others on your trail of misinformation and deceit . You deserve no sympathy, the sympathy should go to those you have damaged.

Windsor’s long had it in for the Nats, but the latest part of feud refers to an ad that the Nationals ran during the 2016 federal election, which compared Windsor’s conduct as an MP with that of a cheating spouse — “running off with Julia” — an inference Windsor took very seriously. His response at the time:”Joyce & Treloar shd (sic) withdraw offensive gutter ad inferring philandering with women. These two should be the last to raise this issue”

That last sentence certainly raised an eyebrow for us here at Crikey. Our item on the tweet concludes — “We hear from the people of New England that Barnaby Joyce has once more cast himself upon the waters of dirty campaigning”.

When the slasher film villain that was the citizenship scandal came for Joyce (remember when we thought that would be the defining blunder of his political career?), necessitating a byelection on the two foes’ battle ground of New England, Windsor declined to run again, telling the ABC: “I actually love elections, I’ve enjoyed the eight that I have contested, but my wife doesn’t and she had a pretty rough time last time with the tactics and strategies that were used, not only against me … but also against the families,” he said.

But the savage truth is, Windsor didn’t need to run to bring Joyce a great deal of pain. And if Windsor believes his personal affairs were unfairly targeted during 2016, the following year gave him a opportunity to respond in kind. This took place largely over Twitter, where he has been explicitly stating what has long been whispered about regarding Joyce’s marriage.

Indeed, when the first mainstream references to Joyce’s personal strife bubbled up to the front page of The Daily Telegraph back in October last year, the only named source of the “vicious innuendo” swirling around Joyce was Windsor and his “series of provocative social media posts”.

While there’s no implication that Windsor is directly responsible, his ex-staffer’s texts — which backed up the reports of Joyce’s allegedly “unacceptable behavior” at an awards ceremony in 2011 — turning up in the Tele‘s damning front page story this morning, there’s no question Windsor wanted something of this nature to be made public, tweeting a veiled reference to “MP harassment in Canberra hotel after Rural Women’s Awards” last October. 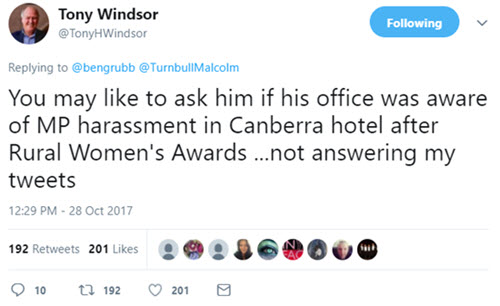 The question therefore has to be raised, in picking a personal fight with Windsor — a lifelong New England citizen, a man who knows where the bodies are buried — while his own house was far from in order, has Joyce brought about his own downfall?

It seems impossible — with this drip feed of embarrassing stories showing no sign of abating, and that ominously specific talk from unnamed Nationals that one more scandal will see him go having happened precisely one scandal ago — that he will survive. What now? Well, as of Tuesday morning there’s a job going at the head of the New Zealand National Party …

BJ’s downfall will be all his own stupid fault.

Yep. Inability to keep his dick in his trousers has been the downfall of many a man better than BJ.

Abating, surely. Although Windsor might well be aiding and abetting the drip feed.

Abetz/ abets was the topic of a great Clarke and Dawe interview. How much I am missing their observations of this affair.

Windsor would have a great insider’s view of what goes on in the Nats …. not unlike a preg-testing country vet’s?

I hadn’t thought it possible that Goose is even more of a dipshit than I always thought he was. Goose!