The ABC has officially confirmed that its special Q&A on the #MeToo movement will include controversial barrister Charles Waterstreet. The barrister has himself been accused of sexual harassment (which he denies).

ABC confirms Waterstreet for #MeToo panel. The ABC has officially confirmed that its special Q&A on the #MeToo movement will include controversial barrister Charles Waterstreet, who has himself been accused of sexual harassment (which he denies). After some online and media blow-back on the panel choice last month, Waterstreet told Fairfax: “Why should I be assumed to be a perpetrator? I look forward to speaking on my own behalf.” The special program will air on Thursday, and the panel will also include The Preatures’ Isabella Manfredi, employment lawyer Josh Bornstein, The Australian columnist Janet Albrechtsen and Macquarie University journalism and gender studies professor Catharine Lumby.

The revolving door. As the Australian Financial Review‘s Joe Aston foreshadowed in yesterday’s column, News Corp’s chief digital officer Nicole Sheffield has resigned. Sheffield had been with News for 10 years, and in a statement released by the company she said she was leaving to “pursue [her] entrepreneurial spirit”. Sheffield had been successful at the company with stints as managing director of News Digital Networks Australia, CEO of NewsLifeMedia and general manager of the Lifestyle Channels group. She came to News Corp from Foxtel under former CEO Kim Williams, who had also previously been at Foxtel. 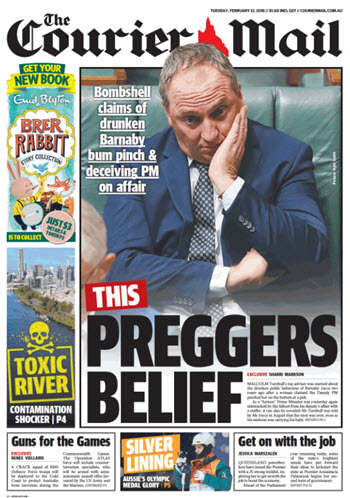 North Korea’s propaganda. The presence of North Korean dictator Kim Jong-Un’s sister at the Winter Olympics in Pyeongchang has attracted plenty of media attention, a lot of it positive. The Daily Beast writes that it’s a propaganda victory for North Korea:

But while some analysts said the hermit kingdom’s representatives outmaneuvered the American diplomatic delegation to the Olympics, the North Koreans also managed to pull one over on some American journalists, who seemed enthralled and entertained by the ‘charm offensive’ Kim Yo Jong was waging at the Olympics …

Both ABC News and The Wall Street Journal marveled at the costume changes and sloganeering but failed to mention North Korea’s human rights abuses or the sad, dark history of North Korea’s cheerleaders.

Wrangling modifiers. Chris Mitchell’s back, with another of his musn’t-be-subbed media pieces. Here’s a doozy we spotted from the second par:

Like the left-wing Fairfax metro dailies, the received wisdom at much of the national broadcaster is left wing and anti-business on matters financial.

Chris is trying to say that the ABC, the national broadcaster, behaves like Fairfax in being allegedly left-wing. What he has actually said is that “the received wisdom” at the ABC is like Fairfax, a comparison of non-congruent elements.

Here’s how the sentence should read:

As at the left-wing Fairfax metro dailies, the received wisdom at  the national broadcaster is left wing and anti-business on matters financial.

Read Chris’s weekly column on failing journalistic standards, and learn to write as goodly as him does. — Guy Rundle

Glenn Dyer’s TV Ratings. The Winter Games and My Kitchen Rules again did it for Seven, but Married At First Slight, sorry Sight, did it for Nine. Nothing did it for Ten, and the ABC straggled –fourth overall, but third in the main channels ahead of Ten.

Married topped national (1.62 million) and metro (1.15 million) markets, beating MKR (1.58 million nationally and 1.09 million in the metros). But the Winter Games started at 9.40pm and simply mopped up viewers — averaging 1.23 million national viewers and enabling Seven to cruise past Nine. And that was the night.

The second part of Underbelly — Chopper saw a sharp fall from Sunday night’s audience — 1.02 million last night from 1.36 million on Sunday. That’s the audience saying to Nine, we’ve had enough, purleese! I’m A Celebrity on Ten averaged 871,000 nationally, better than what the ABC was offering.

It ill behooves grundle, King of the malapropic typo, to chide another scribbler for ratshit parsing.