Who does one believe when the spinners are spinning for themselves?

The spin cycle around professional spinners M+C Partners is gathering speed. The small PR firm is currently facing a court action from Asher Moses, a former executive with the company, for unfair dismissal. In response to his claim — that he was sacked after he was diagnosed with depression and that the company is trying to avoid paying out his equity entitlements — M+C Partners filed a defence with the court saying that his dismissal was related to being affected by cannabis while at work and not showing up in required hours.

The battle has been played out partly in the media, as well as the courts, with a piece in the Australian Financial Review‘s Rear Window column last week prompting an internal email at M+C to “correct” some parts of the column.

One point of contention was Rear Window’s reference to a “rumoured” mural of “what could be interpreted as a skunk smoking a joint”. The Fin was assured it was a cigar, which the company — which represents a number of medicinal cannabis companies — repeated in the internal email. We’ll leave you to judge for yourself: 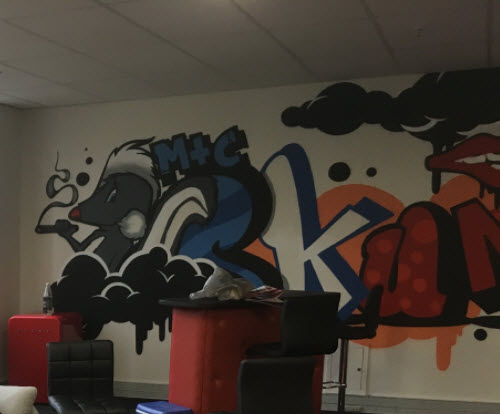 The email said the skunk issue was “some clever PR from Asher”, and offered an interesting take on truth, attributed to Moses: “Something he taught me and a lesson for all you guys: In PR, truth is what you make it. It’s like law, the reality is what you argue it can be.”

Staff were also offered the advice usually given to clients in crisis comms situations: “Don’t worry, it’ll blow over. Eventually the journalist and their sources move on or run out of material. The same applies here. It’s unpleasant when it’s in the papers, we just have to be patient.”

And the Wankley goes to… viral ads, and the 7.30 whispering campaign