Is the Queensland LNP trying to influence the upcoming elections in South Australia and Victoria? ... Belle Gibson brushes up on authenticity ... ACTU to shill for Kearney? ...

High energy campaigning. We have a bumper year for elections coming in 2018 — with polls in South Australia, Victoria and Tasmania joining at least one federal byelection in Batman.  And everyone, it would appear, wants in. A tipster called our attention to this Facebook page, Energy in Australia and the attendant webpage. It’s filled with claims about the energy mismanagement of the South Australian government (and others) and contains specific exhortations aimed at SA Premier Jay Weatherill and energy minister Tom Koutsantonis:

“Jay Weatherill and Tom Koutsantonis MP – ENOUGH IS ENOUGH. South Australians CANNOT afford your renewable experiment ANY LONGER. LIKE and SHARE to tell the SA Government to step up and FIX OUR ENERGY CRISIS!” 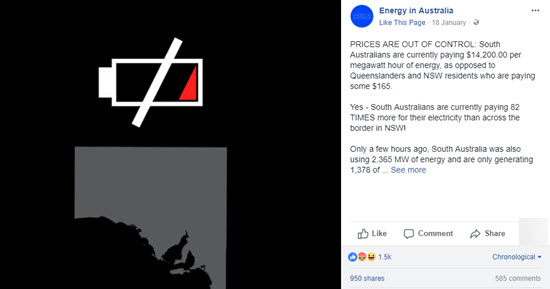 The page also slams AGL boss for his 6.9 million dollar salary “while Australians struggle to keep up with his power price hikes” and points out Victorian premier Daniel Andrews was “chilling at the tennis” while ” 60,000 Victorians were without power”. 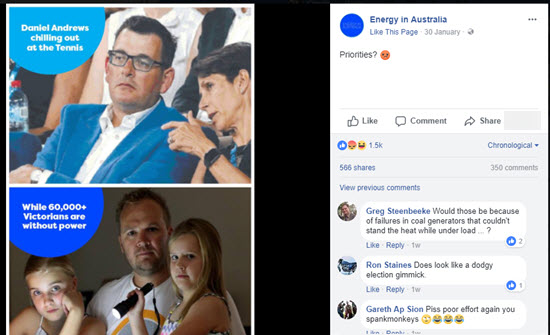 Our tipster was curious about which concerned citizen was putting together this highly charged political material in the lead up to a state election (there was no identification initially). The tipster says they asked the SA Electoral commission, who apparently got into contact with the page’s administrators* who added their authorisation:

And who might this Queenslander, so concerned about the energy policies of other states be, you ask? Could it be Matt McEachan, former Liberal National member for Redlands and shadow assistant minister to Leader of the Opposition, Deb Frecklington?

We asked Frecklington’s office whether this was the case, and if so, is this an official act by the LNP in Queensland, or is it an individual project by MchEachan and whether the ECSA required them to put an authorisation on the page, but didn’t hear back before deadline.

When asked for verification, the SA Electoral Commission told Crikey that it “does not make any comments on any complaints that have been made including allegation of a breach of the Electoral Act”.

Fairfax á court-ing trouble. Any extra twist on Friday’s piece about The Australian and Fairfax’s furious agreement about the work of Simon Holmes à Court — both publishing almost identical comment pieces by him on the same day — Alan Howe, the opinion editor of the Oz told us their side of how the mix up occurred: “Simon will tell you what happened. He offered it to Fairfax. They rejected it. He offered it to me. I rewrote it. Fairfax then published it online unedited. Simon, rightly feeling betrayed, then asked Fairfax to withdraw it.”

Ged! 2018. When former Australian Council of Trade Unions president Ged Kearney announced her candidacy for Labor in the upcoming Batman byelection, ACTU secretary put out a glowing statement about her: “Ged Kearney will now be a fierce voice in our national parliament. I thank Ged for her service to the Australian union movement and wish her every success for Batman”. But is this the extent to which the ACTU is getting involved in Batman? We hear they are actively considering phone banking in the electorate. We asked if this was true, but they didn’t get back to us before deadline.

Prime Minister Joyce.  This morning has brought as flurry of speculation about the future of Nationals leader Barnaby Joyce, with several party sources, both on and off the record, ominously saying that one more scandal (possibly over travel expenses) will be enough to topple the deputy prime minister. But while Joyce may not be running the Nationals for very much longer, he will soon be running the country (for a bit, sort of). When Prime Minister Turnbull takes a fleet of ministers and business leaders to Washington next week for a meeting between himself and Donald Trump on February 23, guess who has to mind the shop?

Belle gives us Pause. Pausefest hit Melbourne over the last week, attracting all sorts of creative tech sorts — it describes itself as “creating a space for free thinkers to converge, engage and find shared purpose,” and an “environment which cultivates true collaboration”, which we can all agree definitely means something. Nevertheless, there were attendees who had a great deal to learn from the events on offer. A tipster says that while at a wonderfully titled talk, (“Authentic — what’s real anymore?“) they spotted in the audience none other than noted authenticity expert Belle Gibson. Ms Tips wonders what could have been so attractive to the disgraced “wellness blogger” — who conned the world into believing she had brain cancer and cured it through nutrition and “alternative therapies” which she then made a tonne of money off — about a session about the malleable nature of authenticity? Regardless, we’re sure it will definitely help with her future employment opportunities.

Well, given how “great” the LNP did in the last Queensland election, maybe their interference will be a blessing for the ALP ;).

Re: PM Joyce. Now what I’d like to see is the msm remain silent – you know, like they did during the by-election when the matter of Ms Campion remained off-limits for a bunch of spurious reasons that were widely rehearsed at the end of last week.

The msm could turn up to the pressers and not ask any questions. Or not turn up at all. Or ask only embarrassing questions and not report anything except the Deputy’s refusal to answer these.

Such an opportunity. They did it years ago (or rather their grandfathers did) with Frank Sinatra.

If the stenographers of the Peanut..sorry, Press gallery do not take the opportunity to interrogate Acting PM, Deputy Dawg & Leader of the gNats relentlessly and at every opportunity from now until his defenestration then they are not worth the oxygen they steal.