Barnaby Joyce and his minders could have learned some media management lessons from how then-NT Chief Minister Adam Giles revealed his partner and former staffer's pregnancy in 2015.

Of the many think pieces on The Daily Telegraph‘s revelation this week that Barnaby Joyce is having a baby with a former staffer, Sky’s Samantha Maiden’s effort made some especially good points.

She argues in her Daily Telegraph op-ed that Joyce and his media team could very well have taken control of how the news went out themselves:

It would have been more gentlemanly in my opinion for the Deputy PM and his media team to manage this situation for his new partner, his wife and his four daughters. They were offered many, many opportunities to release the information in a controlled way. They chose not to. Yes it’s private. But he is a public figure. Controlling how his happy baby news got into the public domain was not something beyond the powers of the second most powerful politician in the land.

It makes you wonder whether Joyce and his minders thought of looking back at the Top End, to how another senior Australian politician handled the media when his partner and former staffer fell pregnant.

The NT’s then-chief minister Adam Giles had not long split from his wife in 2014 when he started dating Phoebe Stewart, a staffer in his office, who — like Joyce’s new partner — was a former journalist for the local News Corp paper, the NT News (as well as the ABC). That relationship was an arguably more-open secret than the Joyce affair, but it wasn’t reported in the news until Stewart fell pregnant in 2015.

And, instead of trying to declare “private matters remain private” and leaving it to the media to take paparazzi shots of a pregnant woman, the Territory’s First Couple sat down for a sympathetic profile and photoshoot with the NT News. 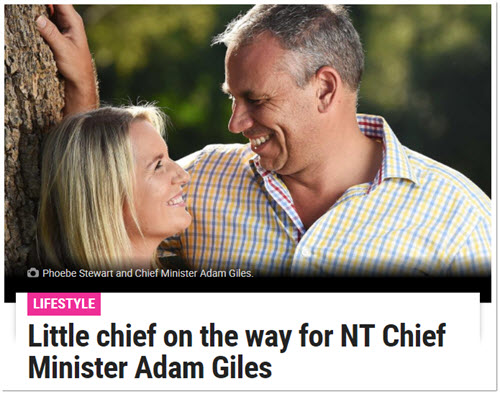 Once the story was out there, the couple was mostly left alone: there was a picture story in the paper when the baby was born, and some light coverage elsewhere.

As the Tele‘s editor Chris Dore asked yesterday when Crikey asked for a comment on the decision to run the story: “What would they (journalists) have done when he started pushing a pram around Lake Burley Griffin or Parliament House?”.

Among the outlets who’ve said they had tried asking questions about the affair is Joyce’s hometown paper, The Northern Daily Leader, who also said they offered Joyce a sit-down interview “to get on the front foot with his local paper” during the New England byelection campaign last year, which was refused.

If Joyce wanted to avoid the frenzy, perhaps he could have taken some lessons from Giles’ very similar path.

NT indigenous employment program might be fraudulent as well as racist

No it is not, but then Adam Giles had split from his wife before the affair, Joyce had not. Also, Joyce had been capitalising on his good moral Catholic, sanctity of marriage image. Like everything else about him this is now revealed as bullshit. HE deserves no sympathy. The big joke is Turnbull saying it is not the government’s business, when Joyce was saying exactly how it was the government’s business. A pox on Joyce, he is a sanctimonious lying windbag who cheats on his wife and gets a colleague to create a new job for the girlfriend or so it would appear.

Vasco
Reply to  old greybearded one

Quite so OGO.
Also, reports today are that FOI requests for records on expenditures for Joyce and his former staffer have been refused.
On 7.30 the other night Joyce claimed that FIO information had revealed nothing.
It just keeps getting sleazier.

The deputy PM is as slippery as a greased pig: if no FOI material has been released of course there’s nothing to see. Apparently the nation must get over it & move on.

Cousin Jethro has chosen his words ever so carefully. He admits there have been REQUESTS from the media but there’s no mention of complying with FOIs, instead he says somewhat ambiguously, ‘there’s nothing there’. Which may translate to: nothing is being made available.

‘This issue has been FOI-ed – that’s Freedom of Information request – from just about every media outlet for a very long period of time. So uphill, down-dale they have enquired into this and nothing has been found, because there’s nothing there.’

‘Well, they have FOI-ed everything to do with my travel and they – and nothing is – has been turned up because there’s nothing there. I mean, it’s not a case of conducting, you know, using taxpayers’ funds to conduct other things than what is your business. And my business is to represent the people of New England and to represent people in Australia.’

I heard on one report that Campion had been Cousin Jethro’s press secretary prior to shifting to Canavan’s staff. A press secretary to a deputy PM should know how to mitigate what can only be termed a scandal.

“It would have been more gentlemanly in my opinion for the Deputy PM and his media team to manage this situation for his new partner, his wife and his four daughters”. ‘Gentlemanly’ is not a term that can be used in regards to this amoeba. I totally agree with Old Greybearded One’s statements, but the fact remains that this low life is a faltering heartbeat from being our glorious leader. The very idea scares the poo-poo out of me!

The DPM’s office provided no guidance or support to Mrs Joyce throughout this time. Months ago the ceased contact with her, and told her nothing about the situation. It was a compete disgrace of the new chief of staff who is the former senior media adviser who is complicit in knowledge of the scandal and did nothing to protect Mrs Joyce or her family.

Barnyard is living proof that Big Jack Lang, as quoted by PJK, was wrong about putting your money on self interest because you know that it is trying.
A modicum of ability is also required.