Ayres one’s grievances? Crikey is hearing a a potential new twist in the ongoing controversy around New South Wales’ planned $2 billion stadium. Is part of the reason NSW Sports Minister (and partner of federal Defence Minister Marise Payne) Stuart Ayres is supporting the stadium proposal to woo talk back king Alan Jones? A tipster tells us that in return for Ayres spruiking the project, Jones (who’s on the board of the Sydney Cricket Ground Trust which is behind the push for the new stadium) has promised to throw his support behind Ayres to replace Gladys Berejiklian as premier. Is a spill in the offing? Know more? Send us an anonymous tip here.

Where’s the Oz Jihad on Jim? Until recently, one of the things you could rely on in our ever-changing media landscape was that The Australian would launch a Holy War over something as simple as a social media post. Tens of thousands of words would be written demanding the sacking and ritual humiliation of anyone deemed to have offended the sensibilities of the old men running News Corp. Hell, even if you deleted a tweet and apologized for it, you’d cop the full Holy War treatment — like Yassmin Abdel-Magied, smeared from one end of the country to the other for an anodyne, and deleted, Facebook post about Anzac Day.

So you’d think that someone deliberately sharing the propaganda of a fascist group with terrorist links, as Jim Molan did in retweeting Britain First, which has links to both Jo Cox’s murderer and the Finsbury Park terrorist, would be worth a Holy War. You’d think someone retweeting the work of a Putin propaganda outlet, Voice of Europe, would earn the wrath of The Australian and induce a torrent of words that went on for weeks.

Imagine if a Greens or Labor senator had shared Hizb ut-Tahrir propaganda, or an Anjem Choudary interview online. Or peddled the lies of the monstrous Assad regime. You’d be reading volume 429 of the Oz‘s ranting months later. But not a bit of it. No Holy War. Not even a Holy Skirmish. Indeed, The Australian editorialised in defence of Molan, who refuses to apologise, indeed believes he is owed an apology. Then again, Yassmin Abdel-Magied is young, female, brown and Muslim. Molan is an old white male reactionary.

Not that Molan’s fans are confined to the Oz. Laura Jayes of the Murdoch-owned Sky News thinks the whole thing was a Labor plot against Molan. She “always enjoys his contributions”. What there is to enjoy in the racist propaganda of Britain First isn’t clear, but, hey, each to their own.

Doyle avoids the slap. Author Christos Tsiolkas has weighed into the scandal engulfing former Melbourne lord mayor Robert Doyle, for some reason. In a letter to The Age yesterday, Tsiolkas, conceding he “cannot speak to the events that led to [Doyle’s] resignation”, goes on to say that “only moral idiots, or those with no knowledge of history, should have faith in trial by media”. Tsiolkas would prefer we focus on the good times; Doyle’s tireless work for the arts — “What I do know is Robert Doyle has always been a passionate and fierce supporter of Melbourne’s artists and writers. I, for one, am very appreciative of that support … In that respect, and in many others, he was a terrific lord mayor.” 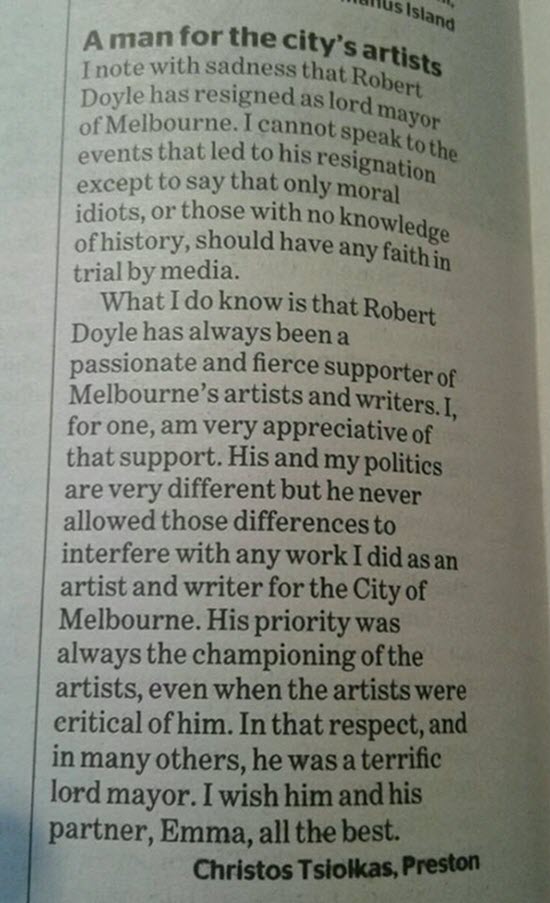 Ms Tips questions what one factor has to do with the other. After all, it was Tsiolkas himself who said at the Melbourne Writers’ Festival last year “to really listen, that is revolutionary”.

It’s all in the game changers. It casts about as long a shadow as any recruitment ad possibly could. Received as possibly “the worst government ad ever”, the Department of Finance’s Meet the Game Changers was chocked with long passages of bureaucratic public sector management speak posing as friendly conversation, delivered with excruciating, stilted earnestness by public servants who suddenly have no idea what to do with their hands.* Like The Room, or Manos: Hand of God before it, it became celebrated for it’s magnificent awfulness. And while it’s not, as far as Crikey is aware, replayed in themed midnight screenings where people shout at the screen, it is commemorated in its own way. A tipster sent us through the screen capture of the Wi-Fi options at department’s cafe, and among the more standard options are “_Game Changer” as well as the catch phrases “Hey buddy…” and “_Paleo pear and banana bread”. 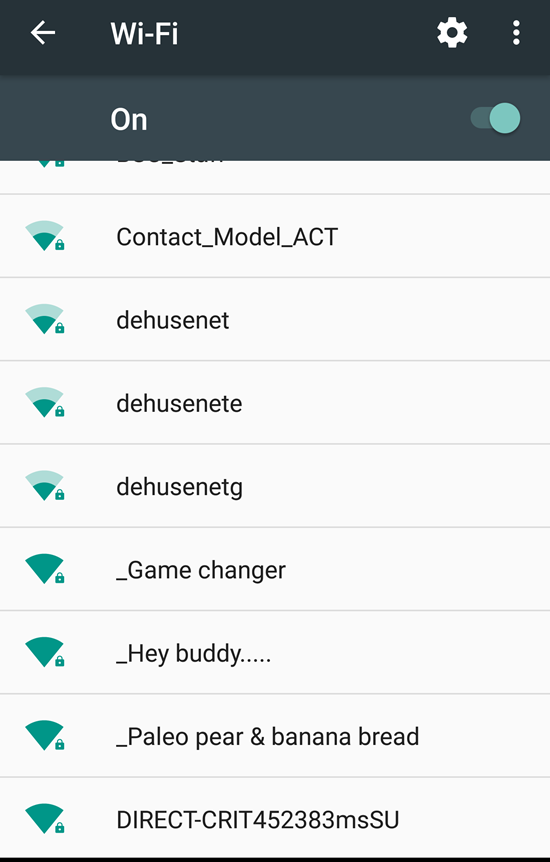 *Ms Tips would like to venture the controversial opinion that, as non-actors delivering the clunkiest dialogue imaginable, the stars of Game Changers did amazing work.

Christos Tsiolkas: a slap to the ABC for killing The Book Show

Evil only triumphs when good men (and women) standby and do nothing. You can decide which story this relates to.

It’s the SCG trust board that needs demolishing.

I’m with you Ms Tips. I suspect those poor “innocent” Public Servants, who were conned into that advertisement from hell, will probably need decades of care and counseling, to live down their darkest hour.
On the Internet, a true “dog” never dies.

Tsiolkas defends Doyle, calling people who have faith in trial by media “moral idiots”. Presumably this includes Doyle himself who resigned because of it.