Catalano engages defo lawyer over “boys’ club” claims. Former Domain CEO Antony Catalano has sent his former employer Fairfax a legal letter over claims published by The Australian Financial Review yesterday that Domain, under him, was a “boys’ club”. Catalano resigned suddenly just two months after Domain (which is still majority owned by Fairfax) floated on the ASX, and the Fin (also owned by Fairfax) reported yesterday that an official complaint had been made about the culture of Domain under Catalano. Today, The Australian‘s Margin Call column reports that there were complaints lodged after Domain’s Christmas party last year, and the Cat has now engaged defamation lawyer Mark O’Brien over the Fin‘s story. Fairfax chairman Nick Falloon told staff yesterday the claims about Domain’s working environment would be investigated.

Graphic NT News Falconio story breaches standards. An NT News front-page story about murdered British tourist Peter Falconio from March last year has been found in breach of the Australian Press Council’s standards. The story, based on an anonymous letter, ran on the front page and with a two-page spread inside the paper, describing new claims that Falconio’s body had been “cut up and dumped”. 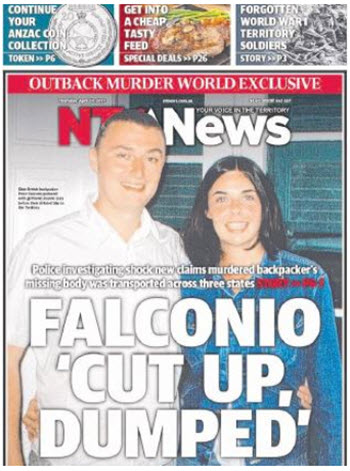 Falconio’s mother complained to the Press Council, saying the letter should have instead been passed onto police. The council sided with the paper in finding that the story was in the public interest, but found the NT News to have failed in making sure the story didn’t cause substantial distress to the victim’s family: “The council accepts there is a public interest in reporting of the crime, however in this instance — particularly one concerning anonymous and unverified allegations — this did not justify such detailed and graphic descriptions.”

ABC’s Ginny Stein made redundant. Veteran ABC foreign correspondent and journalist Ginny Stein is a victim of the ABC’s cuts to Lateline. The Australian reports that Stein has engaged employment lawyers after she was one of four journalists asked to apply for two remaining positions in another example of the ABC’s “hunger games”-style culls of recent years.

The revolving door. Studio 10‘s founding executive producer Rob McKnight, who was sacked from Ten’s morning program last year, has found himself a new job away from the TV studios at News Corp. McKnight announced on Twitter yesterday he would be the acting head of video, covering some maternity leave.

LA Times sold. Struggling US newspaper group Tronc has confirmed it has sold the Los Angeles Times and San Diego Union-Tribune to biotech billionaire and shareholder Patrick Soon-Shiong for US$500 million plus another US$90 million in pension liabilities.

The company also announced that Times publisher Ross Levinsohn, who taken an unpaid leave of absence due to an investigation into an alleged sexual misconduct, will leave the paper but shift into a new role overseeing Tronc’s digital portfolio. An independent investigation and report to the board of directors found no evidence of wrongdoing, the company said. — Glenn Dyer

Where’s Bloomberg? Bloomberg runs a global billionaires index which is updated frequently (daily, even faster) for changes in markets. It’s a handy listicle to compete with the longer established Forbes-style rich lists in various markets. Bloomberg also uses stories on how the world’s billionaires and their fortunes perform during times of rising and falling markets. We saw a good example of the latter this week when, after Wall Street’s slump on Monday, out came a Bloomberg yarn headlined, “Market Rout Wipes $114 Billion From Fortunes of World’s Richest”.

It was what some in the media call a quick and dirty — get one or two facts and apply them to a list of change in events. In this case the huge fall in share prices on Monday and get the story to grab headlines, positions in papers and on websites, and plenty of clicks (envy and schadenfreude are great drivers of online traffic).

So the usual suspects were rounded up on Monday night in the US as Bloomberg editors cast about for story ideas to fill the trading time in Asia and Europe, the update of the list (by no means comprehensive, just three names) was an easy option. So cue Warren Buffett of Berkshire Hathaway, Mark Zuckerberg of Facebook and Jeff Bezos of Amazon: three high-profile, very wealthy business people. Missing from the list was another group of suspects in these cases — Mexican entrepreneur Carlos Slim, Larry Page of Google fame, Bernard Arnault of LVMH (the French luxury goods giant), Rupert Murdoch of you know where, Charles and David Koch, the richest supporters of Donald Trump and the Republican Party.

But there was another usual suspect missing from the Bloomberg Index and that is the company owner, Michael Bloomberg. Most analysts put his wealth at US$40-50 billion. What is unusual about the index is that Bloomberg doesn’t even make his own list. There are media stories from the past which claim this is company policy. But it does mean the much written about and mentioned Bloomberg Billionaires Index is incomplete through design, not mistake. — Glenn Dyer

Glenn Dyer’s TV Ratings. Another solid night for Seven with My Kitchen Rules doing the business topping Nine’s T20  from Hobart. Nine won the night because the cricket went on for more than 220 minutes whereas MKR was done in 115 minutes. MKR managed 1.65 million national viewers  the T20 1.32 million, but that lower figure over the longer time ended up dominating prime time and giving Nine the night, which will be added to tonight with Married At First Sight back in the schedule (after being rested for the cricket last night). Personally, I will be watching Gogglebox on Ten to see what they say about MAFS, MKR and the rest.