Why is Jim Molan retweeting a Russian propaganda account?

As a former soldier, Senator Jim Molan ought to know better than to share Russian propaganda.

You’d think an old soldier like Jim Molan — the Steven Bradbury of the Senate — would retain some Cold War-era wariness of Russia and its implacable hostility to the West. But it turns out that his enthusiasm for retweeting the fake (and racist) claims of extreme-right groups extends to disseminating the work of a Russian-controlled fake news site.

As Crikey contributor Irfan Yusuf has pointed out, last year Molan shared a number of tweets from “Voice of Europe”, a far-right fake news site controlled by Russia that, apart from disseminating racist attacks on Muslims, has been active in supporting Catalonian separatism. 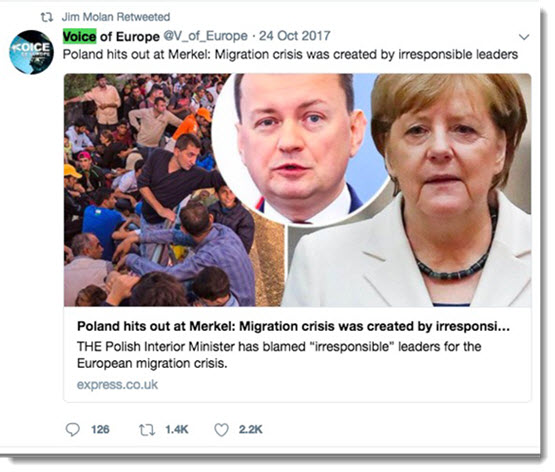 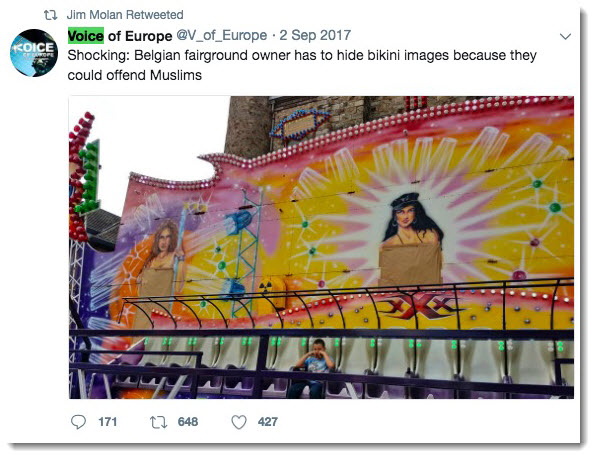 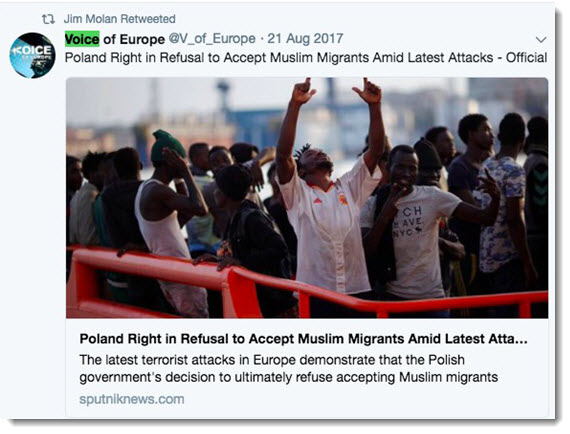 Molan, who has previously called for a ban on Muslim immigration, insists there’s nothing wrong with disseminating these kinds of social media posts. Like many people called racist, Molan appears angry to be labelled as such. “I’ve put my life on the line for Islamic countries … for people to say this is racist I find deeply offensive,” he is quoted as saying.

Perhaps Molan is referring to his command of allied forces in the assault on Fallujah in Iraq in 2004. Perhaps we can ask the surviving residents of Fallujah, and the communities that have endured a dramatic surge in miscarriages and birth deformities in the city after the assault, about whether they think Molan put his life on the line for them. It’s a much more real issue than clicking on social media posts smearing Muslims.

OK Jim, I’ll take you at your word. You’re not a racist. So what explains the choices you made here? Bad judgement, maybe? And bad judgement is a terminal condition in politics. Just as young Sam who flitted out as you entered the Senate. Now Jimbo may have been a fab Maj-Gen (just like Sammy was actually a talented campaigner) but, hey-ho! He hasn’t worked out that the military is not the same as civic life.

“Now Jimbo may have been a fab Maj-Gen”
Pretty f*ckin’ ordinary actually. He didn’t command allied forces in the assault. He was in charge of a thing called “energy security” – a staff appointment that got created on the spot for want of some place to put him (and to spare him the fact that this Academy lifer was almost exactly failing to impress).
We didn’t know him from Adam until he got sworn into the red room – and then only because he can’t stop tipping buckets of shit on the army.

Interesting. I never encountered him during my service (I was a surveyor for most of it), but suspected he wasn’t up to much.

Molan was paid – very handsomely, I’m sure – to “put his life on the line for Islamic countries”. So doing his job makes him not a racist – good news for the entire ADF!

You call Voice of Europe propaganda while gleefully quoting from Voice of America. Somewhat of a pot, kettle, black moment, wouldn’t you say?

Exactly.
And together with Russia’s “implacable hostility to the West” made me think the article was written by someone whose views are as extreme as the article’s subject.

Yes where did that come from Bernard? Putin’s no democrat and he’s as responsible for the deaths of innocents as, say, Howard or Bush, but implacably hostile to the West he’s not. Any leader in the position of finding a major military pact massing its forces as close as they can get to his borders has to take some military precautions but implacably hostile? What evidence is there of that?

I wonder how many Muslims died while Senator Molan “put his life on the line”. Was he shooting or just ordering others to do so? Did he venture out of the Green Zone”? Has he always been a racist? So many questions that I am sure he will ignore.

Brough, Nikolic, Robert, Newman, Hastie now Molan?
One of my fondest memories of this supercilious khaki camouflaged conservative was his appearance on 7:30, as some sort of “impartial, independent expert” on “the refugee problem” – a couple of days before coming out with Abbott and Morrison (as some sort of imprimatur) having hatched Sovereign Borders.
But we can’t criticise him – doing that would be tantamount to criticising the flag, country and “un-Australian”?

Good post Klewso, but I seem to recall the ABC seeking the advice of this serial ratbag quite a lot since Abbott and Turnbull started surreptitiously threatening ABC management.

For all I know, criticising him could be a breach of the “national interest” now.