AFLW presenter “gender equality storm”. The decision to replace the host for an AFLW program with a man is working itself up into a “gender equality storm”, as news.com.au puts it. Last year’s host Tiffany Cherry wrote for the Herald Sun last week, saying the decision by Channel Nine and Croc Media to replace her as host of Women’s Footy with Clint Stanaway was a “significant step back”. AFLW star Daisy Pearce has weighed in now, though, telling SEN Breakfast it’s not necessary to have a woman presenting the show:

When I tune in and hear Rohan Connolly and Jack Heverin doing the preview on SEN for the women’s round, I love that. It shows that the outside world and media consider this to be football, not women’s football.

Bring back Dundee. News Corp has jumped onto Tourism Australia’s Crocodile Dundee bandwagon to campaign for a remake of the 1986 film. The ad — a mock trailer for a film called Crocodile Dundee: The Son of a Legend Returns Home aired during the Superbowl yesterday — prompted the NT News to set up a petition for the film to be made for real. The Darwin paper is reporting today that the “Territory’s own” Chris Hemsworth, who starred in the ad and spent part of his childhood on a cattle station in the NT, is up for doing the film. The story made the front page today, sitting alongside a separate story in strong contention for headline of the day. 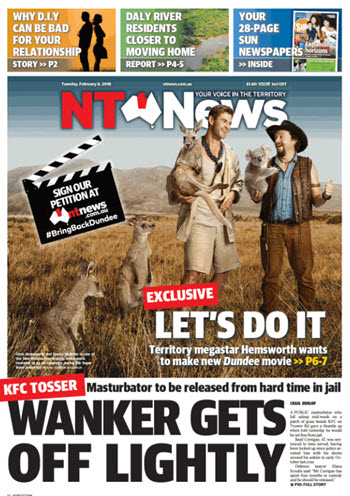 Chaos at Newsweek. Iconic US news magazine Newsweek is in chaos, having yesterday fired two senior editors Bob Roe and Ken Li, and journalist Celeste Katz, who’d written about financial troubles at the news organisation. Political editor Matthew Cooper tweeted that he’d resigned and that the situation at the storied outlet was “untenable”.

The publisher of Newsweek and the International Business Times had its office raided by the Manhattan District Attorney’s office as part of an investigation into its finances. Co-owner and chairman of Newsweek Media Group Etienne Uzac and his wife and finance director Marion Kim both stepped down from their positions last week. And the company came under fire for hiring an executive knowing that he had been put on leave from his previous role at Reuters over sexual harassment allegations. CNN reports:

Multiple sources said staffers at Newsweek are worried for their jobs and have started to reach out to their networks about other employment possibilities. Some were drinking in the office. Katz received a round of applause as she was escorted out of the newsroom, sources said. 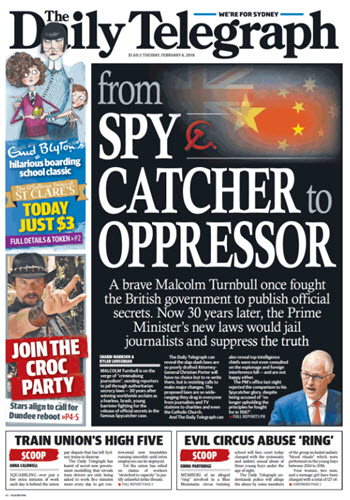 Super Bowl ratings slide. The year 2015 looks like it might have been peak NFL in the US. Since then, regular TV ratings are down around 17% (nearly 10% for 2017 alone). This week’s Super Bowl 52 confirmed the slide with the lowest figures for nine years. A total of 103.4 million watched yesterday’s game on NBC from Minneapolis. That was down 7% from the 2017 Super Bowl. As Deadline pointed out: “A steeper fall than even the declining the stock market”. It was in fact the lowest TV audience since 2009, when the Pittsburgh Steelers defeated the Arizona Cardinals with 98.7 million viewers.

In addition to the 103.4 million, however, there were an estimated 2.6 million more viewers watching via NBCSports.com, the NBC Sports app, NBC.com TV Everywhere, Universo, En Vivo app, NFL.com, NFL Mobile from Verizon, the Yahoo Sports app, and go90. — Glenn Dyer

Glenn Dyer’s TV Ratings. Seven’s night, quite easily. My Kitchen Rules did the job with 1.63 million national viewers, well ahead of Married At First Sight on Nine with 1.26 million (still solid) and I’m A Celebrity on Ten — 989,000. That was not enough to keep Ten in third slot overall and slipped behind the ABC which returned its Monday night news and current affairs line up to full strength and ended up third — although the audience for the returning Q&A at 541,000 nationally was nothing to boast about. The topic was the economy and we were again left frustrated.

Hasn’t Rupert (from under his Limited News) urging this dedication of resources – got enough money and resources to do another Dundee?
Or is this another case of “Adani fever” – not good enough for him to put his money where his mouth is, but good enough for us?

And further to Limited News/Teletrash – after the way they (and others in our media – not least the likes of our increasingly Guthrified ABC’s right-leaning Sales, Lane, Jones, Alberici, Baird, Fanning, Probyn, Crabb) have gone out of their way to go all soft and gooey on the Limited News Party/government, fighting their cynical PR smirking wars against all Opposition (Labor, Greens, critics of Adani and coal) to now be upset when that partisanship is being dumped on?
The way Limited News has gone after the ABC to crucify it for “leaking” that which Limited News would preferred “contained”? Including dispatching Dickie to cover their arses after Masters had been sniffng around their Moonloght State for a couple of months, knowing what 4 Corners would find – what Limited News (doing business in Qld) had kept quiet and sat on for years; including when the ABC was embarrassing Bjelke-Petersen solo.
The self-censoring (withholding of facts) of our advertorial media, where opinion trump news, is being challenged by the amateurs in the government = ‘time to get pissed’?

Never thought it could happen. A Sydney Daily Terrorgraph headline that’s actually serious and one I agree with. The proposed legislation as reported would put us in the same category of suppressed press as China or Egypt.

Further to the above: I lived in Indonesia for several years in the 1970s when Suharto was president and newspapers could lose their publishing licences for publishing opinions or reports inconvenient to the government. A newspaper would get closed down and in a few weeks time the same people would open a “new” newspaper with a similar format and staff but a different name. So “Sinar Harapan” (“Ray of Hope”) closed down but reappeared as “Suara Pembaruan” (Voice of Renewal.”) Apart from closure there was little in the way of punishment for “offending” journalists. Prosecution was rare. Apparently what our government intends is much harsher, censorship via fear of prosecution and imprisonment. I think there may be a minority of journalists who would dare the government to implement that and thereby become prisoners of conscience but not the major media organisations. We would have a compliant State broadcaster in place of an independent National broadcaster.