Building bridges between the ABC and The Australian. Plus other media tidbits of the day.

Vale Michael Gordon. The sudden death on the weekend of veteran Age journalist Michael Gordon has been the subject of some beautiful tributes from his colleagues. Investigative reporter Nick McKenzie wrote of Gordon’s influence on him and his role in the industry:

Beyond the senseless tragedy of a life ended too short, this wave of emotion also goes to the role Michael played as a steady moral beacon in a media and political industry increasingly swamped by partisan shrillness and social media noise.

His Fairfax colleague Mark Kenny wrote that the tributes offered were “a mark of the man that so many not only admired him professionally, but also loved him for his generosity, unshakeable civility, and the finer qualities he discerned in them”. His former colleague Bruce Guthrie, now editorial director of The New Daily has remembered him as a “journalist’s journalist”.

Good feud guide. The icy relationship between The Australian and the ABC could be thawing, if Saturday’s front page is anything to go by. A full and uncritical account of how the Cabinet Files series of stories came about ran as an exclusive in The Weekend Australian, written by the ABC’s head of investigations and former Oz associate editor John Lyons. The piece also ran on the ABC’s website. If nothing else, it’s a good bit of PR for the broadcaster in the paper you’d usually expect on the same side as Liberal MPs Tony Abbott and Craig Kelly over the ABC’s national security responsibilities.

Exclusive watch. Speaking of, Abbott’s sister Christine Forster got married on Saturday, and the high-profile same-sex wedding got plenty of news coverage. And in another example of outlets using a loose definition of “exclusive”, there were a few “exclusives” attached to the big day. The Project‘s newest host Lisa Wilkinson calling their interview with Forster and her new wife Virginia Flitcroft the “only wedding day interview” on Twitter. Which may be technically correct when it comes to live interviews, but the ABC put out a press release spruiking its own “television exclusive” on the story: Australian Story tonight will focus on the couple for the show’s first episode of 2018. Also for back for the year are Monday morning promos on ABC News Breakfast for the ABC’s Monday night line-up — Forster and Edwards gave an interview this morning to promote tonight’s show. Not to mention the interviews the couple did for other write-ups of the big day.

They’ve got no clue. One of the first things newspaper journalists learn is that nothing will ever generate more correspondence from readers than either making a mistake in the lotto numbers, or making a mistake with the crossword. So spare a thought for the newsroom assistants at the Sunday Telegraph after some of its papers (but not all editions) yesterday apparently went out without the clues for its sports crossword. 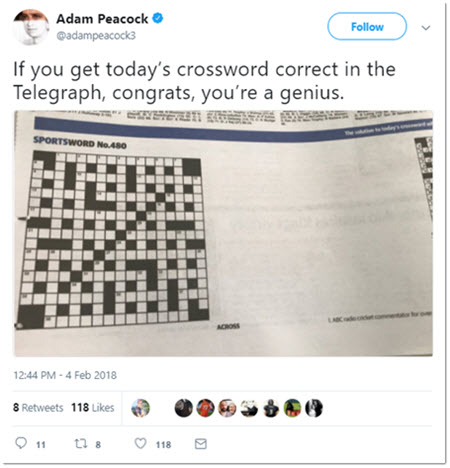 Bauer’s revolving door. Yet another executive is out the door at magazine publisher Bauer, with the head of women’s lifestyle Jayne Ferguson gone. CEO Paul Dykzeul will absorb her duties into his role. Dykzeul is the fourth CEO of the Australian branch of the German company since 2012, which has been plagued by magazine closures and restructures in recent years.

Media stocks hit. US media stocks took a hammering in Friday’s big 665 point sell-off on Wall Street. The Dow’s tumble (and similar slides for the S&P 500 and Nasdaq) was across the board in what was the worst week for the market in two years. Friday’s fall topped what was not a happy week or so for some media stocks as their ‘new rivals’ Netflix and Amazon produced stunning quarterly and full year reports. Shares in Walt Disney, which reports its fourth-quarter figures this week and will be questioned about its deal with 21st Century Fox, shed 3% in value over the week. Fox shares slumped more than 5%, while Murdoch family stablemate, News Corp lost 4.3% (both companies also report fourth quarter earnings late this week).

Cable giant, Comcast Corp fell 3%, CBS (which owns Ten and is now exploring a re-merger with its former associate, Viacom) fell nearly 7%, while Viacom dropped 5%. The New York Times, which also reports its fourth quarter and 2017 figures on Thursday, did well — its shares ended the week up 0.3%, while Amazon shares were up 2%. Apple shares dropped more than 6% and its shares have now corrected (that’s a fall of 10% or more from its most recent high in January). Netflix shares rose 0.9% on Friday, but still lost 2.6% over the week.

Glenn Dyer’s TV Ratings. The cricket season ended — sort of; there are a couple of T20 internationals to go and the suffering Sheffield Shield. But the men’s and women’s Big Bash finals yesterday in Adelaide ended the high profile summer for the sport. The women’s Big Bash — session one from noon had 197,000 viewers, while the short second session saw the audience rise to 307,000. That’s an average of 250,000, which is OK. The men’s final saw the second session average a solid 1.51 million — well behind MKR on 1.62 million, while the first session averaged 1.18 million and the whole game average was 1.35 million, and not that much different than the 1.35 million who watched the first T20 international on Nine on Saturday night. Celebrity was watched by a solid 1.26 million, while Nine’s Married averaged 1.168 million.

But as well as the Big Bash did, as well as and Celebrity and Nine’s Married At First Sight, Seven’s MKR and the hoary old romantic Pretty Woman (807,000), won the night for total viewers. Insiders returned yesterday for 2018 and won the morning with 493,000 national viewers on the AC’s main channel and ABC News. Landline returned at 12.30pm (half an hour later) and easily beat the opposition with 456,000 viewers. That includes the Women’s Big Bash.

Australian Story does an episode on a polititian. What a pointless show this program has become.

The Age last week had as its 9-letter word in its Target puzzle ‘ytterbium’ which had a frustrated reader writing in wondering when he’d ever be able to use this word in conversation.

The first week in January the SMH had as the clue, “Giant Fictional Ape” – 9 letters which had the answer ‘GODZILLA’.
Sigh.