Van Badham to the rescue of stricken comrade Feeney

Not everyone is so salty about embattled Labor MP David Feeney.

Reactions to the auto-defenestration of David Feeney in the seat of Batman itself have been varied — although they pretty much all added up to a giant wave of laughter coming through Northcote High Street and rolling down Ruckers Hill all the way to the city — but one comrade at least had a few kind words for the now beached grouper.

Yes, it’s our old friend Van Badham, chair of anarcho-syndicalist-libertarian-communists for Zionism … and Michael Danby … and David Feeney. In a series of tweets that will remind some grizzled left-wing veterans of left-wing veterans from their youth getting all teary about Dear Leader, Van Batman farewelled the Feenster in grand style: 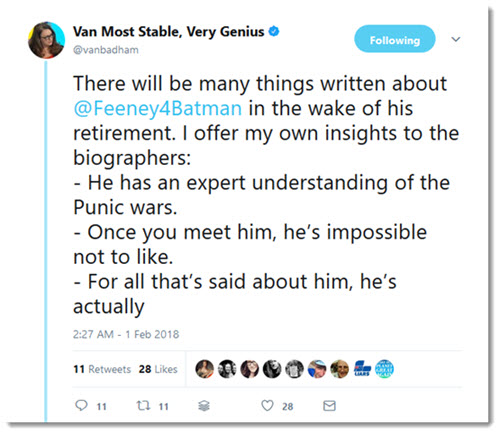 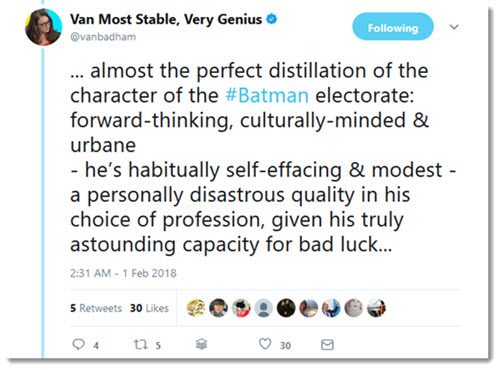 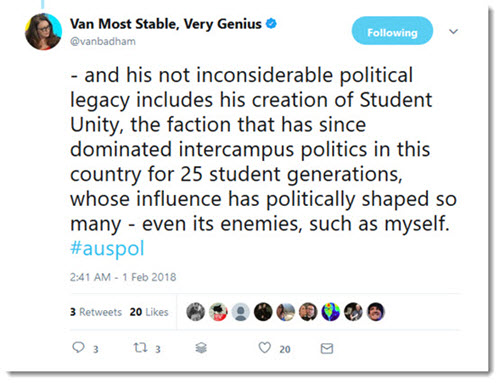 There um, I … well, point one of tweet one is factually incorrect. Point two of email two? Re: modesty, what Churchill said of Attlee. As for him being the victim of “bad luck” and the “perfect distillation of Batman” well, that’s exactly what the entitled Labor elite would say about each other. This pasty, old, propertied-up grouper representative of Batman, from Northcote to Preston, 80-something nations/cultures, hipsters, students, Kooris, seventh-generationers, etc? But he knows about the Punic Wars. Delenda Young Richo est. The Greens are hoping you will get in the van, Labor.

Rundle: Shorten shows his disregard for Batman by cosying up to coal

While we are at it Delenda Abbottus est. A clever side reference to Cato and the PunicWars Guy.

One of the stupider things Van has written to date is how women’s liberation led to patriarchy. Swallow that statement as this old woman who was part of the liberation movement rolls around the floor laughing her arse off.

“… and they salted its fields and land that all died..”.
“And Yea, came the Greening and all was healed!”

It’s pleasing to see that despite all that’s happened in the past, Guy can still employ large lashings of luridly cunning linguistics when figuring on the fate of Feeney without teetering towards taking on a too tongue-tied tone.

To know our Max is to love him. Maybe we should stand him in Batman –
for a fee of course.

….. would they want a Cairn terrier representing them?