Scomo's Chief of Staff to jump ship? ... Abbott explains his squibbing of marriage equality ... behold the world's most boring feud ...

Rabbit toes a fine line. Tony Abbott kicked off his disastrous campaign for a No vote in the marriage equality postal vote by listing a series of reasons (“If you’re worried about religious freedom and freedom of speech, vote no, and if you don’t like political correctness, vote no…”),  concluding, “Obviously I will be voting no. But in the end this is not about the politicians, this is about the people, it’s about your view”.

After a comfortable victory for the Yes campaign, when parliament cast the final votes to bring marriage equality into law, Abbott’s commitment to upholding the view of the people was found somewhat wanting. Despite the 75% Yes vote in his seat of Warringah, Abbott was among 14 MPs who skipped out on the vote. A Crikey reader wrote Abbott’s office to ask why, given the push for a public poll on the matter was an Abbott government concoction. The response is underwhelming.

Abbott says the amendments he moved (all of which were defeated) were “out of respect for the nearly 5 million people who voted ‘no’ “, but “out of respect for the 8 million Australians who voted yes and wanted the bill to pass quickly, I did not vote against it”. He ultimately concludes that he was completely behind giving the people a say and seeing that bring the debate to an end, as long as they agreed with what he thought. It’s a matter of principle, you see: 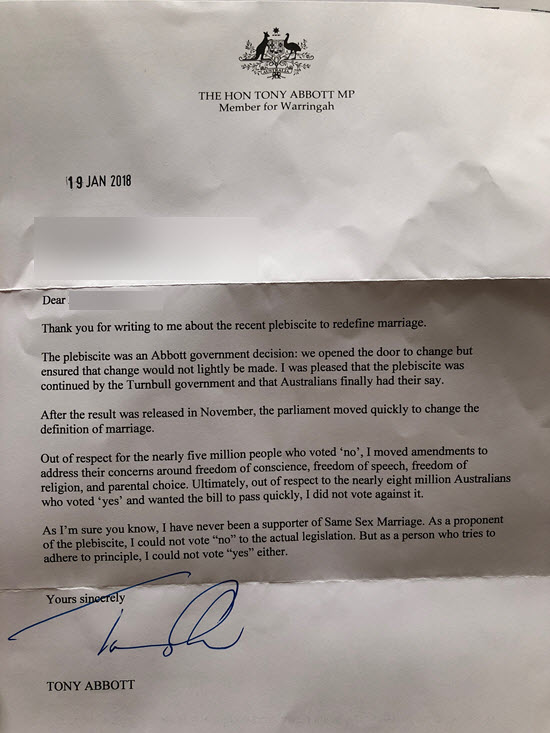 COS they can. We hear that Scott Morrison might be in need of a new chief of staff. According to a tipster, Morrison’s current COS Philip Gaetjens — formerly of Peter Costello’s office — has been offered the position of Australia’s representative at the Organisation for Economic Co-operation and Development in Paris and that he’s accepted and will be off to Paris later this year. If true, this is becoming something of an established career progression for chiefs of staff to treasurers: Wayne Swan’s former chief of staff Chris Barrett took up the posting in 2011, though not directly from one office to the other.

We got in contact with Scomo’s office to confirm, but they wouldn’t say one way or the other, with a spokesperson merely insisting the team was “100% focused on preparations for the 2018/2019 budget”.

A pair of utter Burkes. It has all the elements — government and opposition frontbenchers, public transport, Twitter — for the most explosive feud this side of Biggie and Tupac. First, leader of the house Christopher Pyne tweeted a photo of himself riding a tram, grinning like a haunted ventriloquist’s dummy. It was captioned: “Travelling on a tram in Adelaide today in between meetings!” which is great because he put an exclamation mark at the end of the most mundane conceivable sentence in the English language. 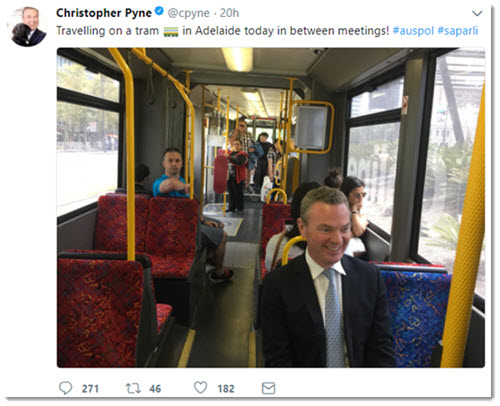 Then, manager of opposition business Tony Burke decided on the politician equivalent of a “diss track”, tweeting a picture of himself on public transport, holding up a phone with Pyne’s tweet (wait, does that mean Burke is holding two phones?): “So I noticed this tweet from @cpyne when I was between Kingsgrove and Beverly Hills Stations. I never realised public transport was a novelty.” 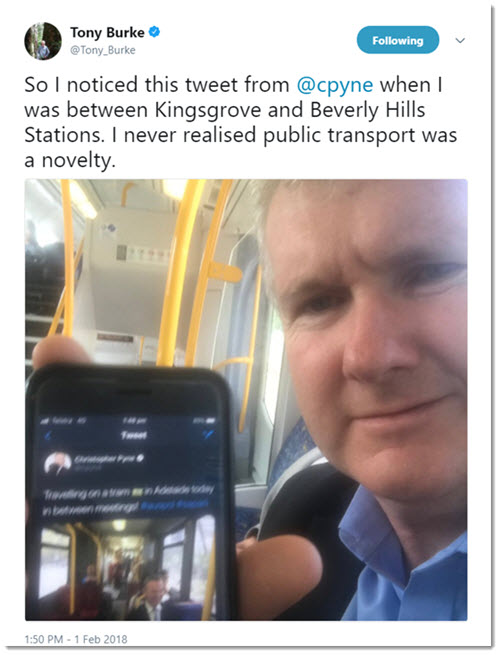 Aww snap, etc. Pyne, however, was not going out like a punk, and clapped back immediately. Ignoring the fact that the images of people holding up phones, featuring images of other people holding up phones was reaching a Black Mirror-esque pitch, Pyne decided his response would be less “tough guy”and “more messy, passive aggressive socialite in a reality show” with his comeback: “Thanks for the shout out Tony! You look a little puffed from having had to run to the train station to make that cutting point.” Ouch. 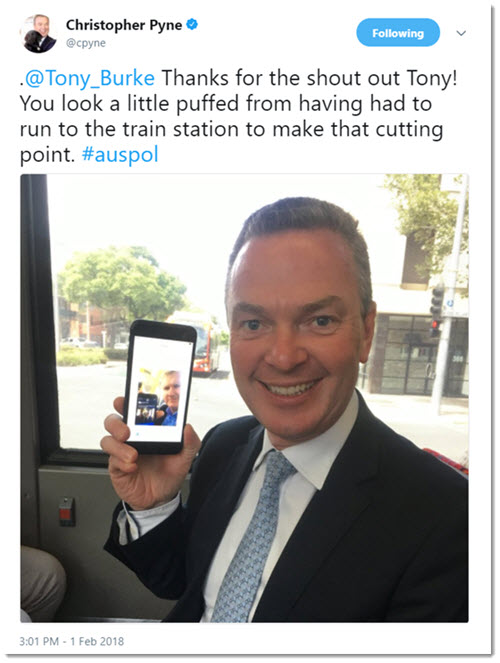 At time of publication Burke has not replied, but we’ll keep an eye on his Twitter as details emerge.

Is it possible Toady Abbott was simply representing all those Australians that voted for him to be PM?

And look, there’s Chucky Pyne, out of his suitcase….

Not at all “… like a haunted ventriloquist’s dummy”.
An Archie would have more integrity, make more sense and be orders of magnitude more human than the Vertical Chihuahua.

Tow the line? Toe, surely. Or is it a mixed metaphor with it being a towline?
Re the pyne, Tumblr had some obscene suggestions to make