Craig McLachlan has engaged Stuart Littlemore QC in legal action against the ABC, Fairfax and actor Christie Whelan Browne over stories published that accuse him of sexual harassment on the set of the 2014 Rocky Horror Show.

McLachlan sues for defamation. Craig McLachlan has engaged Stuart Littlemore QC in legal action against the ABC, Fairfax and actor Christie Whelan Browne over stories published that accuse him of sexual harassment on the set of the 2014 Rocky Horror Show. The defamation writ was lodged in the New South Wales Supreme Court yesterday, and Whelan Browne, whose allegations were heavily featured in the stories published in January, is named as the first defendant.

Good feud guide. Since the Daily Mail took up residence in Australia, its habit of ripping off (or, “rewriting”) has been a particular and understandable sore point for the journalists who’ve done the leg work on certain yarns. In 2014, shortly after the Mail launched its local edition, News Corp Australia sent a legal letter to its competitor, accusing it of plagiarising News Corp stories. And this week News Corp’s Daily Telegraph head of digital Peter Brown is back on the case, having put two of his paper’s stories and the Mail rewrites through an online plagiarism checker, finding they were 56% and 50% plagiarised. 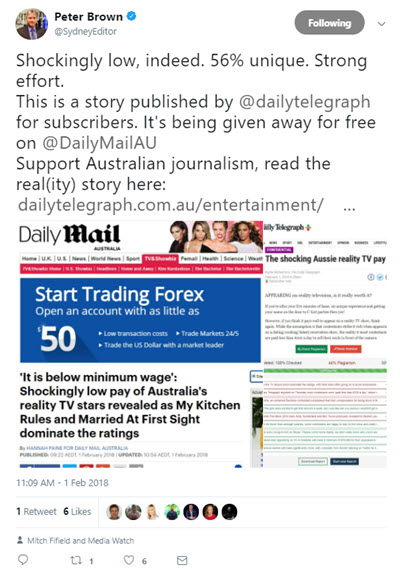 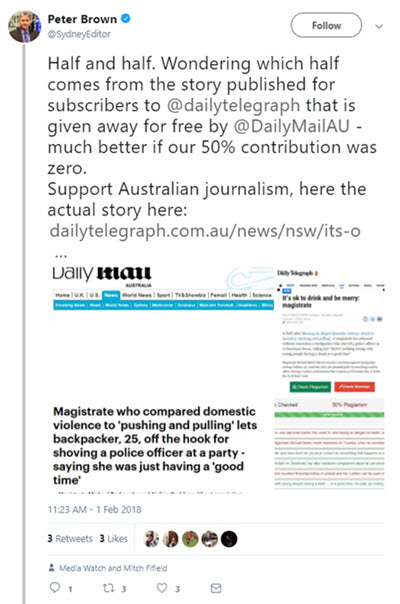 Not quite picture perfect. Nick Xenophon Team Senator for SA Rex Patrick was looking markedly younger in the picture atop his op-ed in The Advertiser today. Patrick took the mistake in good humour, tweeting this morning that it was in fact the SA Best Party candidate Sam Davies, who is running for Xenophon’s party in the upcoming state election. 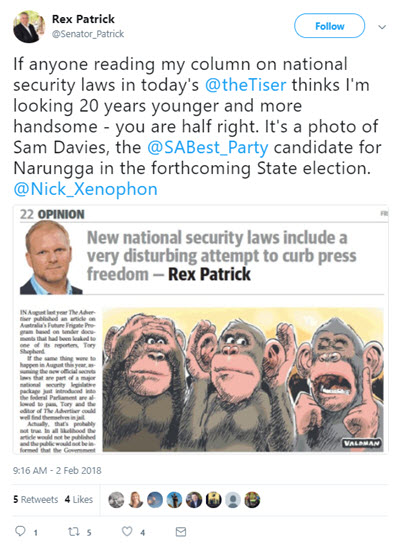 BuzzFeed in talks with Powell Jobs. A major realignment at BuzzFeed could be on the cards following news that the site’s news division could be about to get a significant investor in the shape of the Emerson Collective, the media investor and owner started by Laurene Powell Jobs, Steve Jobs’ widow. The Financial Times reports that preliminary talks had started between the Collective and BuzzFeed editor Ben Smith.

The Emerson Collective took a majority stake in The Atlantic magazine last year (which will become a wholly owned business in coming years), and also has stakes in the online political sites Axios, Anonymous Content, ProPublica and The Marshall Project. Last year The Emerson Collective withdrew from a planned partnership with Leon Wieseltier for a publication, after the former literary editor at The New Republic was found to have engaged in past inappropriate workplace conduct. — Glenn Dyer

Glenn Dyer TV Ratings.  Nine’s night with Married At First Sight (1.364 million), Ten’s night with the first Big Bash semi-final — 1.22 million average across the game on Ten’s main channel and ONE. OK,  and the second semi tonight with the Grand Final on Sunday afternoon after the women’s final starts at Noon. Ten mustn’t be all that confident of a night performance against MKR on Seven and Married on Nine. Ten does have I’m A Celebrity, but if it was really confident in the Big Bash, it would have run it from 6pm to 9pm and put Celebrity on afterwards.  In the metro Today with 267,000 had a rare win over Sunrise with 258,000, but nationally, it was Sunrise by a mile — 460,000 to 391,000.