A Guardian Australia crowdfunding campaign for a new series has already exceeded its target of $50,000, and is now asking for $150,000 to support the environmental reporting.

Guardian Aus crowdfunds for environmental series. Guardian Australia has gone to their readers for funding for an environmental series called Our Wide Brown Land. The fundraising campaign had raised more than $90,000 by this morning, exceeding the original goal of $50,000, which has now been raised to $150,000. It’s the Australian outpost’s first attempt at fundraising for a story. The US site has crowd-funded for three series, and The Guardian globally has a successful membership program that has helped turn its finances around (along with some heavy cost-cutting) over the past couple of years.

BBC report finds no bias. A PricewaterhouseCoopers report into the gender pay gap at the BBC has found no bias in on-air salaries. The report was commissioned after the BBC published the salaries of its highest earners, which showed that two-thirds of its highest-paid stars were men. The report found a 6.8% gender pay gap among on-air staff, but the report blamed that inequality on a lack of transparency and recent budget constraints, which have effected the pay of younger presenters.

Mastermind runs out of questions. Long-running British quiz show Mastermind has banned contestants from choosing Fawlty Towers, Black Adder, and Roald Dahl as a special subjects, as they’ve run out of questions. Radio Times reports that Father Ted and the Chronicles of Narnia have also been exhausted of questions since the BBC show began in 1972. Each contestant has to choose three specialist subjects, which producers have to agree to, for the heats of the show.

Front pages of the day. Melbourne’s newspapers have this morning farewelled businessman and former Fairfax chairman Ron Walker, who died from cancer. 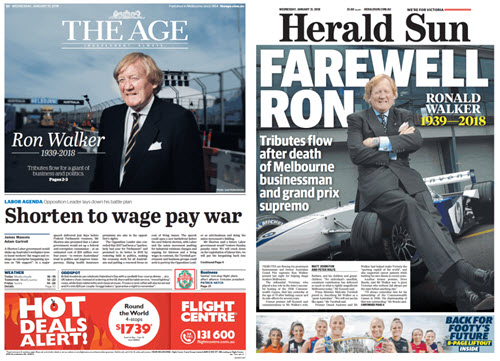 Nine was let down by its new program One Night With My Ex. I can’t give you the national figure, but in the metros it averaged 353,000 from 9.10pm, which put it third and unwanted. It won’t last long. Ten’s I’m A Celebrity was also solid and looks to be doing better this year than in 2017. Ten debuted Hughsie We Have A Problem, but it dropped viewers from Celebrity which wasn’t a good look. Hughsie averaged 290,000 less than Celebrity. If that gap grows in coming weeks then Hughsie, we will have a problem.The ABC was not in sight. — Read the rest on the Crikey website