BBC managers are considering capping all full-time presenter salaries after pay inequalities between men and women at the broadcaster became public, after six male hosts said they would take pay cuts.

BBC consider pay cap for equality. BBC managers are considering capping all full-time presenter salaries after pay inequalities between men and women at the public broadcaster became public. Last week, six male hosts said they would take pay cuts after China editor Carrie Gracie quit her role after learning she earned 50% less than men doing the same job at the BBC. The BBC’s media reporter Amol Rajan has tweeted this morning that one of the proposals to deal with the problem is to cap all full-time news presenters’ salaries at 320,000 pounds.

The revolving door. Kelli Underwood has been announced as the new host of the ABC’s Sunday morning sports program Offsiders. Underwood has been a panellist on the program for five years, and has been working with ABC Grandstand for more than 10 years. She’s replacing Gerard Whateley, who left the ABC at the end of last year for sports radio network SEN.

ABC’s focus on facts. The ABC News channel launched its new schedule, including Stan Grant’s program Matter of Fact. In a press release last week, head of news Gaven Morris said the new line-up, which also includes former Sky News presenter and current Radio National Drive presenter Patricia Karvelas on Sunday nights, strengthened the ABC’s “focus on facts”. Grant was given the daily program after his more resource-heavy Friday evening program The Link was axed at the end of last year. He wrote yesterday that the program would be “big minds discussing big ideas: smarter not angrier”. It’s yet to be seen whether his guest line-ups will include any women — last night’s didn’t.

And The World, hosted by Beverley O’Connor, was back on-air last night, with a new set that, if nothing else, will remind you of the show’s name. 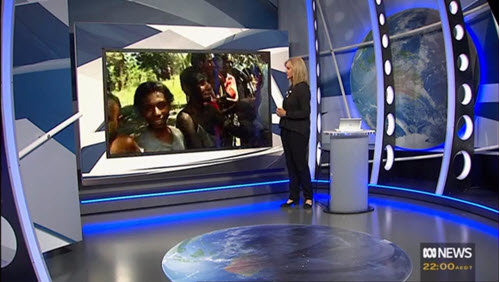 Turmoil at Tronc. The company that owns the LA Times and the New York Daily News is in a state of flux, with new editors announced at both papers amid sexual harassment scandals and the newly-unionised newsroom at the Times. HuffPost has reported that staff at the Times are worried new middle-management hires are planning a national newsroom to sit outside the Times, where staff voted last week to join a union. Meanwhile, senior executives have been moved around in the second management reshuffle in less than six months, according to Nieman Lab.

It makes sense that librarians would get it right. Librarians understand the value of accuracy. They are familiar with databases. Americans by and large trust librarians, actually much more than they trust journalists. And in a nation where traditional local news outlets are cutting back, their advertising coffers drained by Google and Facebook, their ownership increasingly by hedge funds or other out-of-town enterprises, where else can a citizen go?

Glenn Dyer’s TV Ratings. Seven easily won the first night of the non-ratings ratings battle — the first skirmish of 2018 so to speak, despite another fall in the number of viewers for the first episode of series nine of My Kitchen Rules. MKR averaged 1.7 million national viewers last night — down around 10% from 1.82 million for the first ep of 2017. The metro audience dipped to 1.18 million from 1.3 million, but the regional audience was up to 525,000 from 513,000, which is why TV networks can’t ignore regional viewers, even if Oztam now seems to be saying we have to by limited the number of national audience rankings we can access daily.

The Good Doctor (1.62 million nationally), in fact, saved Seven from what would have been a much closer finish with Nine, who will be happy with what they saw: Married At First Sight averaged  1.27 million (1.29 million a year ago). Travel Guides averaged 858,000 nationally, down a touch from the 908,000 for the first night of 2017. The Good Doctor easily accounted for that, and that will be Nine’s weak spot on Monday nights. Seven would have been relieved to see the new story lines and characters in Home and Away put it in the top 10 nationally with 1.27 million viewers — it had been floundering towards the end of 2017.

Nine though would not have been very happy with the numbers for the relaunch of Today with Georgie Gardner replacing Lisa Wilkinson. Today could only manage 243,000 on average in the metro markets from 7-9am, whereas rival Sunrise averaged 308,000 metro viewers — a clear win. Just look at the way Lisa Wilkinson boosted the number of viewers of Ten’s Sunday Project on Sunday night — the 7pm part was up 88% nationally. And that halo effect carried over to last night and the 7pm part of the program last night again did very well — topping the 7pm ABC News and 7.30 quite easily in metro markets (which will become a worry for the ABC if it persists).