Did 7 take the bait? The Seven Network has denied it mistakenly bought a Kiwi satirical fishing program to run on its 7mate digital channel. Users on Twitter yesterday started to speculate Seven buyers thought the program Screaming Reels was a serious fishing program, because it was categorised on some TV guides as “reality”, “sports” and […]

Did 7 take the bait? The Seven Network has denied it mistakenly bought a Kiwi satirical fishing program to run on its 7mate digital channel. Users on Twitter yesterday started to speculate Seven buyers thought the program Screaming Reels was a serious fishing program, because it was categorised on some TV guides as “reality”, “sports” and “news and documentary”. Yesterday morning the show was broadcast among other, more serious, fishing programs. 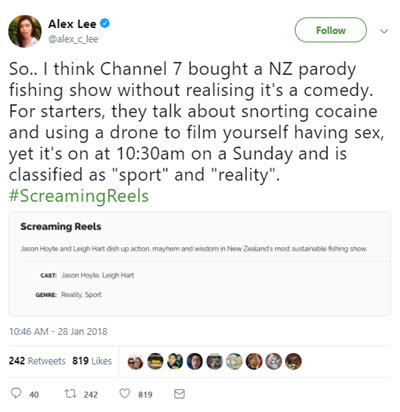 On Seven’s own catch-up service, the category is “comedy”. A Seven spokesman told Crikey: “Yes, of course we knew Screaming Reels is a comedy. It is a great show for the channel and fits all classification guidelines”.

That’s live TV. The commercial TV breakfast shows like to get out to see real Australia from time to time, but leaving the studio does come with its risks. Today‘s Natalia Cooper couldn’t quite hide her shock this morning while crossing live into the program from Parramatta, where she was giving commuters $50 to top up their public transport Opal cards. After handing the cash over to one tradie dressed in high-vis gear, she asked what he got up to on the long weekend. “Punched a few cones,” he said. Cooper quickly moved on to other commuters at the station. 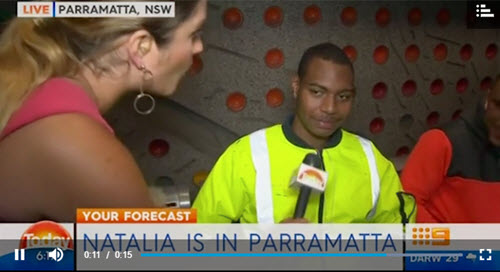 The revolving door. The Australian’s former political correspondent David Crowe has announced his new gig — he’ll be starting on February 19 as the chief political correspondent for The Age and The Sydney Morning Herald. We speculated Crowe might be in line for the role after he left The Oz in December, to fill the position after James Massola — who previously held the role –was appointed Fairfax’s new Jakarta correspondent .

And HuffPost Australia‘s editor Chris Paine, who was left without a job when the website ended its joint venture with Fairfax late last year, has landed a job with his old boss Luke McIlveen at Fox Sports Australia. Paine has previously worked under McIlveen at news.com.au, and at Daily Mail Australia. MIlveen left the Mail as editor-in-chief last year to take up a new role as executive editor at Fox Sports.

The follower factory. A New York Times investigation has taken a deep dive into a company that it says is part of a “shadowy global marketplace for social media fraud”. Including some great interactive elements, the online feature investigates a company called Devumi, which sells Twitter followers:

Drawing on an estimated stock of at least 3.5 million automated accounts, each sold many times over, the company has provided customers with more than 200 million Twitter followers, a New York Times investigation found. The accounts that most resemble real people, like Ms Rychly, reveal a kind of large-scale social identity theft. At least 55,000 of the accounts use the names, profile pictures, hometowns and other personal details of real Twitter users, including minors, according to a Times data analysis.

New York tabloid goes behind paywall. The New York Daily News is introducing a partial metered paywall for the paper starting Thursday, joining the much bigger New York Times in controlling access to its website. Potential readers without a print or digital subscription will be able to read 10 articles for free each month before they are asked to subscribe. Readers with a print subscription to the newspaper will get free digital access. The introductory offer for digital subscriptions will be 99 US cents for 13 weeks. But not all of the paper’s content online will require a subscription. Its homepage and various section fronts — such as news, sports and entertainment — will be available for free to readers.

The Daily News joins The Atlantic and Wired which started metered paywalls this month, while The New York Times (which reports its fourth quarter and 2017 subscription and financial results Thursday night, Sydney time) last month chopped the number of free articles for non-subscriber readers by 50%. The Denver Post, the largest newspaper in Colorado, put up its own paywall last week. It is the second time the Post has tried a paywall — it ran the previous attempt from 2013 to 2015. — Glenn Dyer

Glenn Dyer’s TV Ratings. The men’s final last night at the Australian Open Tennis on Seven was a thrilling end to a great competition and Roger Federer was a worthy winner. But so far as Australian TV viewers were concerned, it didn’t have the attraction of last year’s Federer-Nadal final which attracted 3.59 million national viewers for the game and 3.69 million for the presentation. Last night’s game attracted 2.3 million national viewers (can’t give you the national figure for the presentation because once again not enough data was received to give a most watched list nationally and for breakfast/mornings). Tennis Australia had better make sure Roger Federer continues in good health because without him, last night’s lower figures will end up the best they can hope for.

Ten started I’m A Celebrity Get Me Out of Here last night, as it did a year ago. It did better than a year ago — the first night averaged 1.68 million against 1.54 million a year ago. And Nine showed the fifth and final One Day International cricket game between Australia and England from Perth — it did OK and probably soaked up quite a view viewers who would have watched the tennis. That they preferred to watch Australia being walloped at the hands of England after another batting collapse says a lot about the stoicism of Australian cricket fans at the moment. The ODI averaged 1.39 million nationally for the second session (up against the tennis and I’m A Celebrity) and 1.362 million for the first session.

Ten’s hiring of Lisa Wilkinson for the Sunday Project worked — the first night saw a near 90% jump in audience numbers from late last year. Now to hold them. — Read the rest on the Crikey website.

I wonder if he was collecting two pay packets ……………..And HuffPost Australia‘s editor Chris Paine, who was left without a job when the website ended its joint venture with Fairfax late last year, has landed a job with his old boss Luke McIlveen at Fox Sports Australia. Paine has previously worked under McIlveen at news.com.au, and at Daily Mail Australia. MIlveen left the Mail as editor-in-chief last year to take up a new role as executive editor at Fox Sports.