Partisanship among brands may be less acute in Australia than it is in the US, but it's not a trend we can ignore.

Back in November, there was a trend of US conservatives destroying their Keurig home coffee makers. Keurig is an American brand of coffee machine that produces a pretty ordinary cup of coffee. But it was not the average brew infuriating America’s right. It was the brand’s politics.

Keurig made conservatives mad by pulling its advertisements from right-wing pundit Sean Hannity’s Fox News show, after Hannity called for support of then gubernatorial candidate Roy Moore in the face of sexual assault allegations involving minors. That encouraged a boycott, and a search among conservatives for a more conservative way to get their morning cup of joe. But it may also have been the leading edge of a trend for partisanship to jump from politics into the consumer domain.

In the US, many consumer brands are loathed or loved depending on whether you are left or right. This extends to media brands and hotels chains owned by presidents, but also brands you might expect to transcend political boundaries. For example, conservative favour for the National Football League fell in 2017 after players began kneeling during the national anthem to protest treatment of African Americans.

In Australia recent politically motivated boycotts include one against Carlton United Breweries when they moved to sack and then rehire 55 workers at 65% of their original pay, and against Coopers Brewery when they stuck their nose into the marriage equality debate. These types of campaigns have tried to make your consumption choices explicitly political.

Partisan attention is something most consumer brands try to shake off. For example, US fast food retailer Chick-fil-A was caught in a storm of partisanship last year after its association with groups opposing same-sex marriage. It worked quickly to drop those links.

But that sort of rapid PR triage doesn’t always work. Sentiments can stick. It won’t be long until more brands decide they can actually do better by harnessing division than by denying it. Take Black Rifle Coffee Company. It leveraged the Keurig incident to try to become the cup of choice for conservatives. “Progressives hate me and conservatives love me,” CEO Evan Hafer told Fox Business.

The US seems to becoming more partisan, as depicted in this map of historic voting trends within the US House of Representatives. 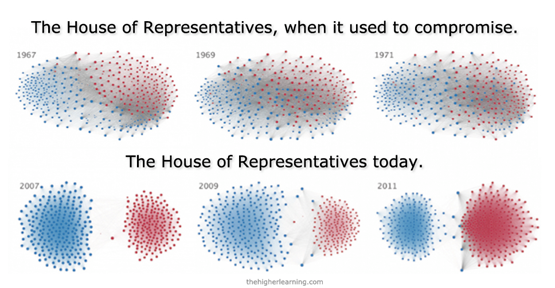 But partisanship is more and more present in Australia too, where television shows like Q&A and The Drum are forced to stack their panels with stereotypes from each side of the political aisle to avoid accusations of bias, and media brands are increasingly carving up readership by political affiliation.

If all that passion seems wasted, remember that partisanship is actually one of the strongest compulsions humans are capable of. Research from Stanford University found that party affiliation is even more salient than race in a startling array of domains, including the sharing of money and awarding of scholarships.

Where do brands come in?

Many brands are already inherently politicised. Anyone driving a Toyota Prius or wearing a Sea Shepherd t-shirt, for example, can be expected to care about the environment. Other brands obtain their political associations via their typical consumers. A Mercedes parked at an exclusive golf club is not likely, statistically, to have an owner who votes Green.

Before we end up with conservative soap and liberal soap, left-wing bread and right-wing bread, brands need to decide they can sell more product by emphasising their political affiliations.

Sadly we can already see a model for this in the proliferation of gendered products. If humans believe two groups have differences, companies will exploit them to sell more products or charge higher prices to one of the groups.

So if Keurig were smart they’d create a subsidiary — owned via a shell company — that sells a coffee maker with opposing politics. Perhaps it would be called Bald Eagle and have a star-spangled brand identity. Then the original Keurig brand could make a strong statement against Trump and in favour of the next Democratic presidential candidate.

After that the company would sit back and watch sales rack up across both its brands.

I know the stats (or can suspect them), but don’t rule out the Merc-driving Green. In my seat of Higgins (where the Greens now beat Labor for second place), closest house to me which sports a Greens sign during elections also features a very modern Merc in the driveway. Not sure if they’re golf club members, but in seats like this, you can expect Greens voters to have a few bucks.

The social concord is breaking down. Revolt occurs where possible and convenient.

“A Mercedes parked at an exclusive golf club is not likely, statistically, to have an owner who votes Green.”

Not the best example you could have chosen, quite a bit of Greens support comes from the well-off who can afford to make social issues their primary concern. A number of blue ribbon Lib seats are more likely to fall to the Greens than to Labor if they ever fall.