Victorian residents are increasingly afraid for their safety now? You don’t say…

Residents of Victoria fear for their safety because of gang crime? It's only been on the front page of The Australian for nearly three solid weeks. Amazeballs.... 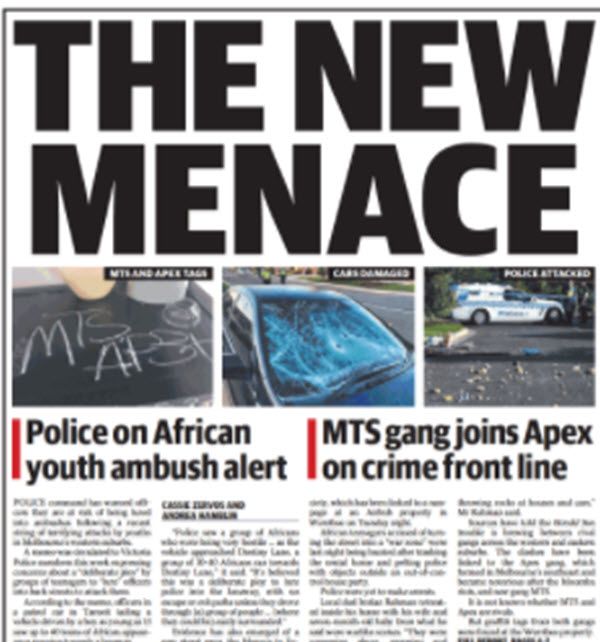 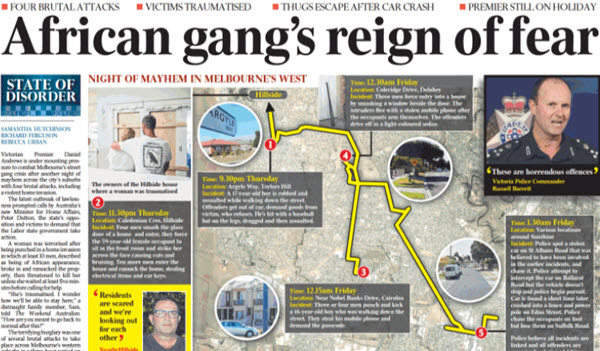 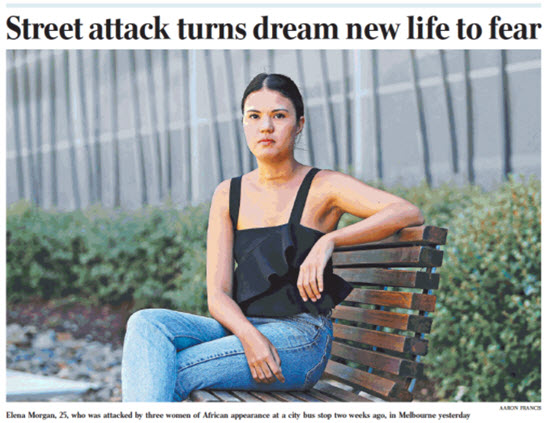 Since when has the COALition or its chief propagandists at Limited News ever let *facts* get in the way of racist, anti-Labor fear & smear campaign? It’s not like they have anything else to offer the Victorian Public…..especially when Mafia Matt is having lobster dinners with known mob bosses.

Fake news sells. Get with it!

How dare you cruel the News Corp pitch with facts, Rundle.

Then there was the Sales’ pitch on the increasingly Limited News parroting and tabloid 7:30, 8 days ago?
With an election due in Victoria in 10 months (after the 2010 one-term wonder that was their Limited News Party government) – she had fellow Dutton fear-merchant, red neck and ex-copper, Jason Wood on to fly solo and unchallenged, to run off at the mouth giving his “judgement” on what’s going on?
What would Police Deputy Commisioner Crisp know about “gangs”? “Dead” Wood’s done his “research” in going back to the layman’s view of a gang – reflecting Rupert’s?
And apparently there’s been ‘aggravated burglaries in one in 20 homes in Clyde and Nth Clyde to go with one in 27 in Officer – all down to these Sudanese gangs’ – the way he spins it without being pulled up?

I gave up watching 7.30 and that Sales dill some time ago…for reasons like the one you quoted above. It happens on that program all the time.
Talk about reconstructed ‘fake’ news? How about misinforming the public on most things? That sounds about right!

Guy, much as I deplore the beat-up by Dutton and Guy (Matthew I mean) I also care passionately about the correct use of statistics.
Quoting raw figures for the level of South Sudanese crime means nothing; how does it compare to the number of people in Victoria of SS background?
The very article you link to says “There certainly is some over-representation, ” and admits the figures only show country of birth, not ethnic background.
On the other hand, to be truly representative, the figures should compare crimes by SS youths as compared to other youths; I suspect there are many more SS people in the age bracket (of any background) which commits most crimes.

Aren’t you a bit late for your cross-burning, Adolf? Spare me your “concern troll” BS, & just admit that you’re a racist. The fact remains that you are more likely to be struck by lightening than attacked or suffer vandalism at the hands of a South Sudanese migrant-of any age. Funny how 100 white teens ran rampant in Torquay, & the Mainstream Media largely ignored it. That’s white privilege for you, right there.
If you’re bothered about reliance on “raw stats”, though, how about we correct for socio-economic factors? I bet that we’ll find that South Sudanese are *under* represented in the crime stats when we take poverty and/or unemployment into account.

The reality is that every decade has given a new group of migrants for the racists to demonize-the Greeks/Italians, the Vietnamese/Cambodians, the Lebanese, the Muslims & now Africans. Only people from the shallow end of the gene pool actually buy into this demonization, however. Maybe your time would be better spent asking Mafia Matt why he hangs out with gangsters, or why his party cut police numbers when they were last in government?

Phew, what a spray.
Being struck by lightning etc is totally irrelevant.
I DID suggest correcting for other factors.

That’s a decent blow up, I don’t know if it’s fully justified either. But I can understand your anger about how much this issue is being played with.

I agree with your point woop, I’ve asked the same question over the last few months with all of these stats flying around. Living in a regional Victorian town leaves me wondering how much of this stuff going on in the city is true or not and whether there is any evidence to back up the normally ridiculous claims of News limited.

I don’t doubt for a second that the Herald Sun/Australian have an agenda to push, but I think it’s valid to question what are their backgrounds and not just country of birth. What category would second generation South Sudanese kids show up in the statistics? Is that being missed?

Genuine question I’m not trying to shit stir anyone.

Shame that you ruin what might actually be a good point of debate by being incredibly rude Marcus.

What is “incredibly rude” is when people tell racist lies. This garbage has been going on since the end of the White Australia policy. Every new wave of immigrants gets demonized by the Right Wing Media & Right Wing pollies, ’cause it keeps the rednecks from the shallow end of the gene pool voting Conservative. Meanwhile, Anglo kids can go on a rampage & the Media will barely touch it….& even when they do their ethnicity is never even mentioned. Denial ain’t a river in Africa.

It wasn’t a good point in debate – GR used meaningless statistics.
I would prefer not to make it personal, but I’m not a redneck from the “shallow end of the gene pool”, I vote Green, I live in an area with lots of Africans and I go out without fear.