Staff at Seven West Media in Perth have been given until Tuesday to submit an expression of interest in voluntary redundancy, as part of cuts announced late last year.

Seven West Media to make staff cuts. Staff at Seven West Media in Perth have been given until Tuesday to submit an expression of interest in voluntary redundancy, as part of cuts announced late last year. Editorial staff were told yesterday via email there was not a target number of people to leave the newsroom. “It will be looked at in the context of the whole business and will depend on operational requirement,” the email said.

In November, CEO Tim Worner said the company would cut $55 million in costs across the country by the end of the financial year. Fairfax Media reported yesterday that Seven West Media’s WA boss John Driscoll had said he’d worked “tirelessly” to reduce costs, but as a last resort, there would need to be redundancies.

In the midst of the cost-cutting, Seven has also announced it’s bought The Simpsons and MASH in a deal with Fox. — with Glenn Dyer

New Matilda published a number of stories last year alleging sexual harassment by Waterstreet, claims that he has denied. The ABC yesterday said in a statement the panel on the February 15 program would “represent a variety of perspectives and experiences, exposing Australian citizens to a range of views and ideas they may oppose, as well as those they support.” 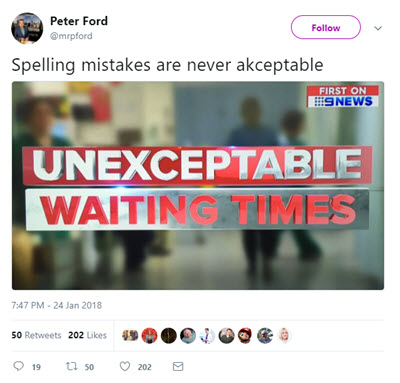 Fin Times story brings Presidents Club down. The Presidents Club has decided to close after a Financial Times report detailing alleged sexual harassment and groping of women at a men-only fundraising dinner it organised. The group said late on Wednesday that “the trustees have decided that the Presidents Club will not host any further fundraising events”. Remaining funds held by the trust will be distributed to children’s charities and it will then be closed.

The club faced a rush of criticism after the FT reported yesterday on an event the trust held last week, in which hostesses hired as staff said they faced harassment, including repeated groping by the male attendees. Great Ormond Street Hospital said earlier it would return previous donations from the trust, with the famed children’s hospital citing the “wholly unacceptable nature of the event”. David Meller, who was the joint head of the club, resigned from his role as a non-executive board member at the Department for Education as a result of the scandal. Meanwhile, the UK charity watchdog has opened an urgent investigation into the allegations of widespread sexual harassment. — Glenn Dyer

Censored student journos launch rival paper. Enterprising high schoolers in Salt Lake City launched their own newspaper earlier this week after school administrators removed a story they’d put on the school newspaper’s website. The student journalists at Herriman High School had written about a teacher’s sacking, which was later removed and the students’ editing privileges stripped. In response, the reporters set up their own news website to publish the yarn themselves.

CBS commissions Murphy Brown revival. Will it work? Deadline reports CBS has ordered 13 episodes of a remake of the classic media sitcom, Murphy Brown. Creator Diane English and star Candice Bergen will be back for the remake. The series will air in the US fall, 30 years after it the original aired in 1988 — it lasted until 1998, and I think Murph got her townhouse painted, but I can’t be sure. Eldin did return in the final episode after Murph crossed over briefly and interviewed GOD.

Give Waterstreet a place on the Q&A set, otherwise there’s a danger it will be heavy with holier-than-thou pontificators.

Waterstreet’s IQ is at least twice that of the usual politicians robbing Studio 22 of oxygen. Not only that, he’s articulate.

What’s this – Crikey commenting on a spelling mistake (not a typo, incidentally)? Pot etc.

It’s not so much a spelling mistake as aphasia, using the wrong (non)word entirely?
Like ‘irregardless’ and ‘misunderestimate’ it should be enshrined in Mrs Malapro’s Museum of Infelicitude.

If ‘Murphy Brown’ resumes, I’d like it to start where I last saw it, with the ardent boyfriend in a dolphin suit.