SA Best time to call.  Ahead of the upcoming state election, we hear the South Australian Liberal Party have taken to Robo-calling voters in the seat of Hartley, where Nick Xenophon is standing, offering some, shall we say, leading questions —  “What is most important to you, more Jobs, the high cost of living, health, the reliability and cost of electricity or other?”

“Who will you vote for and is it Jay Wetherill or Steven Marshall you want to be premier?” “Will you vote for [Liberal] Vincent Tarzia, [Labor’s] Grace Portolesi or Nick Xenophon?” “What gender are you and how old?”

The calls come at the same time as a blitz from the Libs in the seat including a much publicised offer of $7.5 million for 300 car parks at Paradise Interchange. (Incidentally, to whomever in Liberal leader Steven Marshall’s team came up with “Libs will pave Paradise and put up a parking lot” as a headline on their media release: respect).

Trump at risk of being buried. The Air Force one of Presidential Helicopters, Marine One, is a very big helicopter, very big (it has to be with all that armour, comms equipment and a big ego inside). But there are doubts it and its back-up will be able to be used around Davos, Switzerland on Friday when the President is due to fly in an out for his appearance at the World Economic Forum.

Recent snowfall in and around Davos has been so heavy that the whole area is now on the highest rating for avalanche warnings in Switzerland — level 5. Reuters reports that local officials “had evacuated two dozen residents from vulnerable areas while crews used explosives to reduce dangerous build-ups on some slopes above the town.”

The question remains: if the president can’t conveniently chopper in and out, will he even bother coming?

Australia Day, the debate continues. Ms Tips spotted this intervention in the cafe copy of the Herald-Sun closest to the office. Appended to a Rita Panahi article about how terrible celeb politics is, is this handwritten endorsement: “Let’s worry about other things like crime homelessness job (sic), not about changing Australia Dy (sic).” A fan? Did Panahi get snipped by a sub? Is she hand-adding copy back to every copy of the Herald-Sun? The debate continues. 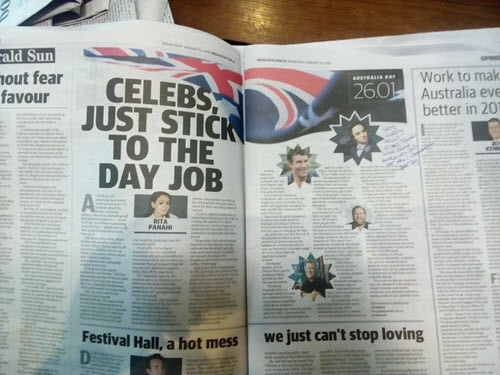 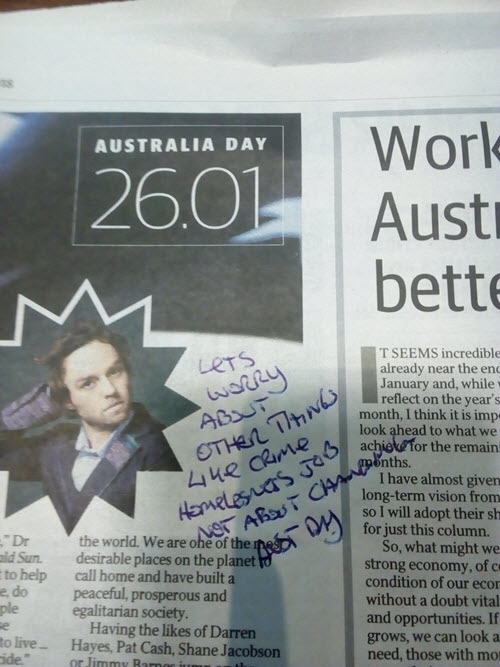 Wake up, lil Sufi, wake up. On the subject of Australia Day takes, over the weekend WA Today published a column called “Inconvenient fact: Native title can only exist if Australia was settled, not invaded” by Western Australian Liberal Party policy committee chairman Sherry Suffi. The piece argues, regardless of one’s view of the arrival of the British in Australia, calling January 26 “Invasion Day” is legally all wrong, “because international law recognises all territories acquired through invasion and annexation by force, prior to World War II, as lawful conquests.” To argue otherwise will undermine native title law, apparently, and Sufi argues further that Australia bears none of the hallmarks of an invaded country; after all, the British were better that Hitler or Napoleon would have been, Arthur Phillip and Lachlan Macquarrie had loads of black mates and in one instance, most of the perpetrators of a massacre were punished (Sufi has nothing to say about the hundreds of other massacres committed during the frontier wars). It’s really quite the thing.

It’s also worth remembering Sufi’s time as the Liberal candidate for Fremantle in the 2016 federal election. Any chance he may have had of cashing in on Labor’s stumbles — they dumped original candidate Chris Brown when it was revealed Brown had failed to disclose an criminal conviction in his past — evaporated when Sufi himself resigned when it was revealed he’d fudged his CV, and mocked WA MP Michael Sutherland’s accent, while using crude sexual language. He’d previously argued marriage equality would lead to polygamy and criticised the stolen generation apology, but obviously that’s no barrier to entry of the broad church.

Roll on, #SummerofNazis. Channel Seven recently came under fire for giving airtime to the views of noted Hitler-sympathiser and far-right golem Blair Cottrell. And now, it seems, the propaganda ministry at Pyrmont is at it again — albeit in a more insidious fashion. A Crikey tipster has drawn our attention to the current trailer for Seven mainstay Home and Away, which features a prominent shot of a shirtless male surfer character, his hulking Aryan back emblazoned with a Gothic script tattoo that reads “blood and sand”. This slogan sounds eerily similar to blut und boden (or blood and soil), a handy little Nazi catchphrase that encapsulated both Hitler’s pro-agricultural philosophy and his hatred of all Jewish people. Is Channel Seven subtly idealising the pure lifestyle of coastal-dwelling surfboard fascists? Probably not. But it serves as a good reminder: when you’re drafting slogans for a bunch of aggro troublemakers, it pays to do your research. 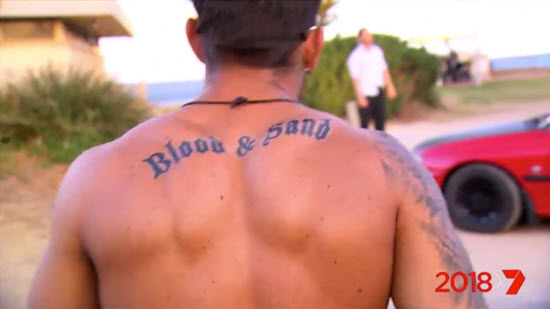 Not just the Libs having a go at Xenophon.
https://indaily.com.au/news/2018/01/24/xenophon-graded-f-nurses-union-scorecard/
“The SA Branch of the Australian Nursing and Midwifery Federation said Xenophon’s party had failed to respond to “repeated requests” for health policy detail ahead of the March state election.”
Xenophon’s excuse?
“Xenophon told InDaily that he meant no disrespect, stressing that his “small start-up” political party would be releasing health policies soon.”

I must say I find it amazing that Xenophon has been in parliaments, state and federal 20 years, the last 10 at federal level, the last few as the head of a federal party [NXT] and he does not have a ready to go health policy.

It certainly does pay to do your research. Rather than reference Hitler and the Nazis, there’s nothing new in Home and Away co-opting the lifestyle and slogan of Sydney’s notorious Bra Boys. http://www.smh.com.au/entertainment/tv-and-radio/bra-boys-amused-by-home-and-away-homage-20110205-1ahmt.html