McLachlan fights back … the BBC takes on Today … the revolving door

Actor Craig McLachlan will sue Fairfax Media and the ABC for defamation over allegations they have published of sexual harassment and indecent behaviour while working on the 2014 production of Rocky Horror Show.

McLachlan to fight Rocky Horror claims. Actor Craig McLachlan will sue Fairfax Media and the ABC for defamation over allegations they have published of sexual harassment and indecent behaviour while working on the 2014 production of Rocky Horror Show. The Australian reports that McLachlan has engaged lawyer Mark O’Brien, who is currently preparing a statement of claim.

The decision to take court action follows an incredibly sympathetic interview given to The Sunday Telegraph and published yesterday, with McLachlan and his partner Vanessa Scammell saying the allegations had “annihilated” his career. The exclusive interview included numerous references by McLachlan to his “Benny Hill” sense of humour and his devastation at the allegations. The report, though, did have an unusual definition of “no restrictions” for the interview: “There were no restrictions on the interview, but, citing legal advice, the actor would not comment on the specific allegations made against him.” 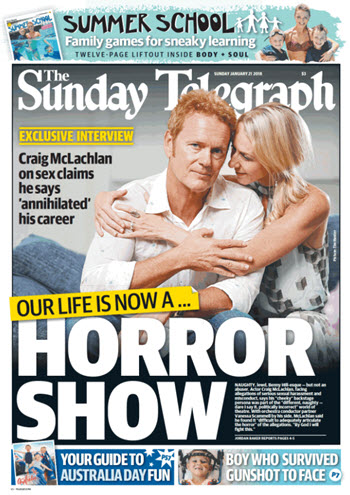 The highest form of flattery. The BBC has taken note of a TV promo for Nine’s Today, where former newsreader Georgie Gardner returned as co-host this morning. Both ads feature their respective breakfast show hosts presenting their shows, and throwing in tips for the day directly to viewers. And the BBC has noticed, posting about the similarities (which include word-for-word scripts) on its Twitter account. 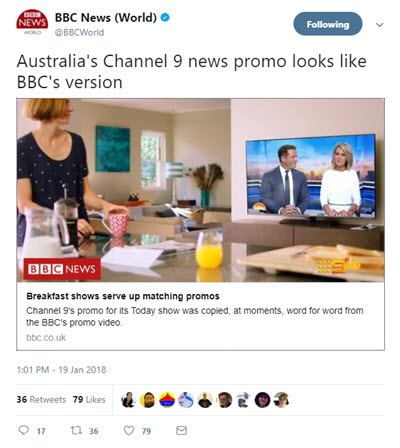 The revolving door. Veteran foreign correspondent and Ten News presenter Hugh Riminton is adding another job to his repertoire, presenting Sunday Extra on the ABC’s Radio National, starting this Sunday. The public broadcaster announced the high-profile addition to its roster of talent, saying Riminton would continue in his role at Ten as well. Riminton said in a statement: “RN is the true home of the Great Australian Conversation. I know its listeners are passionate, smart and engaged. I can’t wait to start.”

Changes at the LA Times. While journalists at the Los Angeles Times overwhelmingly voted to form a union — the first for the 136-year-old newspaper — its new-ish boss Ross Levinsohn was placed on unpaid leave over claims of harassment and homophobic slurs at previous places of work.

The LA Times vote comes amid a rising tide of similar votes at other news media, mostly new digital outlets. The LA drive was launched in October and culminated in an election earlier this month. Results released on Friday by the US National Labor Relations Board, showed workers voted 248 to 44 to be represented by the NewsGuild-Communications Workers of America. The LA Times is owned by the peculiarly named Tronc (the old Tribune company).

But the wait for the vote results on Friday was overshadowed by news that Ross Levinsohn, who was named the Times’ publisher in August, had twice been sued over sexual harassment allegations. The report on US National Public Radio alleged Levinsohn had used homophobic slurs when he was chief executive of Guggenheim Digital Media. It claimed it had reviewed court documents and financial filings and interviewed 26 of Levinsohn’s former colleagues, revealing the CEO was a defendant in two sexual harassment lawsuits. Numerous female colleagues have spoken out about his alleged misbehavior in professional settings spanning two decades. The two lawsuits against Levinsohn were filed by female colleagues at Alta Vista in 2001 and at News Corp in 2006, NPR reported.

Tronc Chief Executive Justin Dearborn said in a Friday email to LA Times employees that Levinsohn had agreed to take an unpaid leave of absence and that law firm Sidley Austin would conduct an investigation into the allegations. — Glenn Dyer

Glenn Dyer’s TV ratings. Welcome back to 2018. So little has changed. We are still in the summer ratings doldrums, but land is on the horizon. Nine won the first week of the year with the 5th test, Seven won last week with the Australian Open tennis, which easily accounted for the ODIs on Nine and the Big Bash T20 tip and run on Ten.

The tennis averaged just on 1.5 million for the prime time session last night, while Session 2 of the ODI (Australian batting) averaged 1.4 million.

Haven’t seen the 9 promo, but SBS’s new set for the news is a dead ringer for the BBC’s