Labor has started the year messily and Bill Shorten can't always rely on the Liberals to take the spotlight off his own flaws.

For nearly four-and-a-half years, Labor under Bill Shorten has run a smooth, unified and professional operation totally at odds with the chaos caused by Kevin Rudd during the Gillard era. Shorten has benefited from the kind of backing that Rudd didn’t get from Shorten and that, in the end, Julia Gillard didn’t get from him either. And while he’s deftly pursued relentless Tony Abbott-style oppositionism, unlike Abbott he’s been prepared to commit to policy bravery unseen in Canberra since the days of John Hewson.

But much of Shorten’s success is due to luck. That’s not to downplay it. In politics, as much as in war, you make your own luck. Luck — in the form of Kevin Rudd’s pathological egotism — was the political alchemy that transformed Tony Abbott from the base metal of an ordinary, divisive reactionary into a prime minister with a landslide. And luck, in turn, has been kind to Shorten: Abbott made every post a loser in two years of chaos and bungling. But then, unexpectedly, so did Malcolm Turnbull, with a little help from Abbott and friends.

On the rare occasions when the Abbott government was able to take the focus off its own bumbling and put it on Shorten — like the trade union royal showtrial — Shorten looked bad (remember that donation?). But pretty much every time that happened, the Coalition would swing the focus back on itself — Shorten’s turn at the TURC was followed promptly by Bronwyn Bishop’s turn on Chopper Squad and, within two months, Abbott’s ouster.

However, over summer, with Malcolm Turnbull having dealt, however clumsily, with the various problems of last year — MPs not knowing which countries they were citizens of, the homophobia of much of his backbench — Shorten is back in the spotlight. Or, more accurately, some of Shorten’s mates are back there.

Longtime Victorian right ally David Feeney is again causing problems for Labor. Feeney’s absolute shocker of a 2016 election saw him dumped from the Labor frontbench. Now he threatens to cost Labor a lot more than some embarrassing headlines, with the High Court almost certainly poised to chuck him and his Dog Ate My Homework excuses out of his seat of Batman, which he held by only 1,850 votes against the Greens in 2016. A second Greens Reps seat will do little for parliament — Adam Bandt pointlessly labours in obscurity in the seat of Melbourne — but it will be a serious blow to Shorten.

Then there’s another Shorten mate, Michael Danby, who has embarrassed the party in recent weeks both with his travel expenses and his taxpayer-funded jihad against anyone unprepared to run propaganda for Benjamin Netanyahu’s regime. Danby is also obsessed with another foreign policy issue (he sees himself as a kind of freelance foreign policy spokesman) albeit one where he has a lot more judgement — he’s a long-term critic of China’s aggression and interventionism.

Which brings us to another of Shorten’s problems. Primarily thanks to Sam Dastyari’s remarkable lack of judgement, there’s now a perception that Labor is softer on China than the Coalition. It is on China that Turnbull has been effectively pursuing Australia’s national interest, seeking to revive the four-way India/Japan/US/Australia security process foolishly abandoned by Rudd, and moving closer to Shinzo Abe’s Japanese government (with which Tony Abbott, to his credit, has also worked hard to establish close relations). The contrast in recent days between Turnbull, busy in Tokyo further deepening our defence ties with our second-largest trading partner, and Labor, where questions remain about the extent of the influence of the China lobby and various appeasement backers within it, has been acute.

None of this is particularly important outside the Canberra bubble. But it’s a messy start to the year that theoretically, on both current polling and the odds of an early election, should end with Shorten as PM.

Then again Shorten faced a major challenge when Turnbull became Prime Minister. The never-popular Shorten had to face a rampantly popular Prime Minister in the last part of 2015. His response was to accept that he couldn’t out-charisma Turnbull but go hard on policy instead. The results, with Labor coming within a few thousand votes of government, spoke for themselves. The same lesson should apply now. 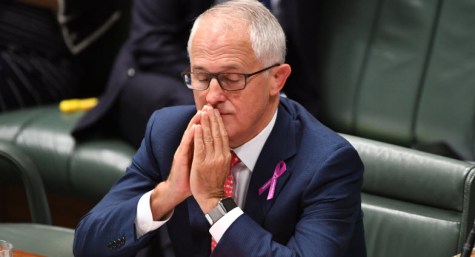 Where to now for Shorten?

IKR – with Roberta Williams running against him and everything!

Why can’t he?
Just when we thought they were about to avoid being the story, Simon Birmingham decided that the best way to play the craptastic NBN f*ckupathon (and insuperior result thereof) was to BOAST about its magnificence more fulsomely than Donald Trumps doctor.

“remember THAT donation?”
No (until you reminded me), and I suspect that nobody else did either. Not as vividly as Melting Truffle squibbing yet again (whaling again), in yet another Tokyo covfefe (not a typo).

You’re not off to a great start either Bernard, trying to downgrade Bill’s policy achievements in contrast to the LNP total lack of talent in that area, is almost as bad as Trioli and Rowland staring their new year with dum-dum Downer from the IPA as their first guest pollytator.

“Adam Bandt pointlessly labours in obscurity in the seat of Melbourne.”

That’s a strange comment, revealing of anti-Greens bias perhaps. Bandt gets a lot of media coverage for a crossbench MP, and he’s a respected local member.

If you don’t live in Melbourne he probably gets zero coverage; the Greens don’t help themselves in this regard, despite being their only lower house MP he is way down in the pecking order when it comes to being the Greens’ spokesperson on big issues. Maybe Waters and Ludlam being gone will help that, but the reality is the Greens make heavy use of Senate committees and Senate negotiations to put their positions in the limelight and it is the one thing Bandt can’t participate in.

It’s his tic, one of several.

Getting a bit sick of having to make this point to Crikey, Bernard. Will you *please* not use the word jihad for every campaign you disapprove of. Among Muslims the word jihad refers to an effort to achieve some desired result. Performing pilgrimage is a form of jihad. So is being kind to your neighbours. So is earning for your family. So is defending your country. By definition Christians do crusades, not jihad. Danby is Jewish so if you don’t know what his kind of campaign is called, call it a campaign.