Woolside turns around on clean energy ... rumblings of unrest at Seven News over Nazi interview ... the Australia Day event where no one mentioned Australia Day ...

Teaching an old dog renewable tricks. A world first for that old-fashioned fossil fueller Woodside Petroleum: buried in the company’s December quarter report — released on Thursday — was this bit of “new-age” thinking (well, for an old-age resource company).

Woodside has formalised an agreement for the installation of a 1 MWh PowerStore lithium-ion battery on the Goodwyn A platform in 2018. This is the first offshore application of this type of technology in the world. Following installation of the battery, Goodwyn A’s use of fuel gas is expected to be reduced by more than 2000 tonnes per year, delivering an estimated 5% decrease in the platform’s CO2 emissions.

Well I never — first, South Australia, then the likes of AGL, followed by a procession of new converts from business to battery technology — but Woodside, where Business Council heavies past and present (and climate change sceptics, Michael Chaney and Richard Goyder) dominate the boardroom? Talk about Damascene conversions. Next, News Corp will reveal its own battery back up.

Arsehat of the year 2018, early entry. When Liberal politicians fulminate about “union thuggery”, they usually make some obeisance to unions having once been necessary to prevent exploitation, but now sad decline, etc etc. Ha ha, not Julian Leeser, the smooth podperson member for Berowra, who has come out against the eight-hour day tweeting “If we’re going to rename public holidays, we should start with Labour Day. Most hardworking Australians work longer than 8.” 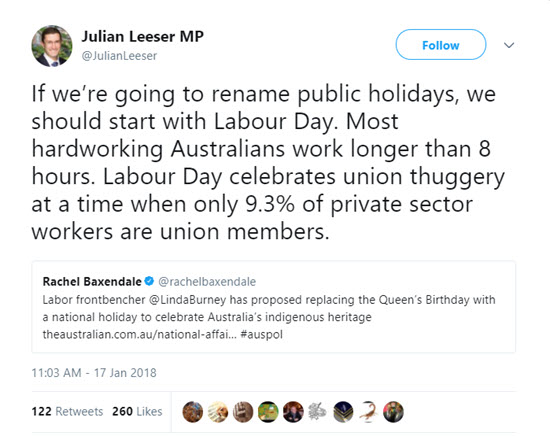 Maybe they are only 10% Julian, but you know what? What’s worth asking is what percentage of their parents and grandparents were in a union, and whether they think that was a good and necessary thing before the state guaranteed (pretty haphazardly) hard-won conditions, including overtime. And why your party has polled 46%-54% on two-party preferred for 25 Newspolls in a row: they know you’re a bunch of bastards, sometimes reluctantly to be called on. Leeser is a former aid to Tony Abbott and is writing a biography of Billy McMahon, whom he believes is unfairly underrated as a PM. Well, proximity to Tony Abbott will lead you inevitably to that conclusion. Please Malcolm, put this good man front and centre. He’s a secret weapon (we just don’t know whose).

Ratings-baiting. When Channel Seven ran an interview earlier this week with United Patriots Front leader, Hitler enthusiast and actual brick Blair Cottrell, the overwhelming response was “Who let this go to air?” It’s worth noting that Seven’s Melbourne newsroom is run by former Hun editor Simon Pristel and Sydney is now under former shock jock and Gina Rinehart PR man, Jason Morrison. Pristel and Morrison are national director of news and current affairs Craig McPherson, who oversaw (as executive producer) Today Tonight. A tipster tells us that McPherson, regardless of his political views, will “run anything he thinks will get eyeballs, including race-baiting”. The tipster also says that many reporters in Melbourne and Sydney are not happy that their leaders’ right-wing ideology, combined with ratings desperation — Channel Nine is beating Seven comfortably in these big markets — is leading to stories about Nazi neighbourhood watch. Know more? Get it touch.

Don’t mention the culture war. Nothing but sequins and glamour at yesterdays’ Official Australia Luncheon in Victoria at the cavernous Melbourne Room at Jeff’s Shed. Ray Martin, Kerri-Anne Kennerley, Bert Newton, Daryl Somers and Denise Drysdale were called to draw on their worst TV moments as a promotion for  the new Australia Post telly stars stamp series.

If you’re wondering, the effervescent KAK named Harrison Ford as a real dud interview while Ray Martin recalled runner Michael Johnson walking out on him. Later on, the crowd was treated to a panel hosted by Jon Faine and featuring prosthetic limb innovator Mat Bowtell, philanthropist Rhonda Renwick and pharmacy boss Alan Oppenheim. Bowtell was far and away the crowd favourite, so much so that one Samuel Johnson was spotted in the front row giving him a personal standing ovation. Ms Tips can only agree. Bowtell’s story is worth a read. No word on the raging discussion on changing the date of Australia Day at the official event but safe to say it was a prominent topic among guests.

re Woodside… Managers will be quite happy about the 2000 tonnes of extra LNG which can be sold each year. The reduction in CO2 will also help because it makes a good press release.

‘Next News Corp will reveal its own battery back up.’

Reminds me of an article in ‘the New York Times’ from March 4, 2011 entitled ‘News Corporation is Carbon-Neutral, Murdoch Declares.’

Pity News Corp has been so global warming denialist since (and before) then.

Any peasant who stands up for their rights is a “thug” in the eyes and mind of the LNP.