The year has started with record-low share prices for Seven West Media, down 3.6%.

Seven’s record low shares. Happy New Year, Kerry Stokes — 2018 has started as 2017 ended with your media assets still making you poorer. That big story from 2017 for Stokes — the price of Seven West Media shares — has made an early appearance in 2018; specifically, why have they fallen more than 12% in the past month?

Nothing has happened or been reported by Seven West. The annual tennis fest is on the Seven Network, rating OK — not brilliant, but OK. Seven has the Winter Olympics next month from South Korea that will now grab (or should grab) more viewers because South and North Korea are co-operating, marching together and taking some of the tensions out of the region, for the moment.

Greste takes up uni role. Journalist Peter Greste has taken up a new role teaching at the University of Queensland. Greste, who was jailed in Egypt when he was working with Al Jazeera, said in a tweet he’d be “teaching, but also engaged with research and advocacy on the importance of a free press. And hopefully keeping my hand in with a bit of journalism as well”.

Why wasn’t the story reported at the time, when it might have intensified questions surrounding Trump’s character just before voters went to the polls? Journalists say they held back because they couldn’t independently corroborate key elements of Daniels’ account, including in one instance from Daniels herself. The story, in other words, failed to rise to journalistic standards, never mind that it involved a man who regularly attacks the news media for lacking standards. 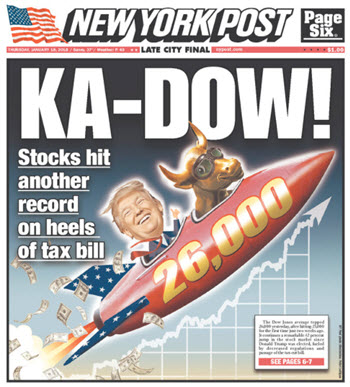 I take great pleasure in the share price of Seven Media falling. At its current prices, there’s very little downside in its price continuing to fall.

I refuse to read the West Australian. It’s very much ‘Murdoch light’. And I only watch Seven for the AFL (and I always hope that the program promotion they do during their AFL match telecasts is of their worst not best programs. The programs they promote seem to me to be so dire, I think I’d prefer a dental canal treatment. Without anaesthetic).

Hopefully the Seven share price drop is karma for their embrace of Nazis.