Supply and remand: why are our prison populations ballooning?

Despite crime rates falling across the board, our prison populations are booming, and don't look like they're slowing anytime soon. What's putting more Australian's behind bars?

How does Australia have a booming prison population but a falling crime rate? 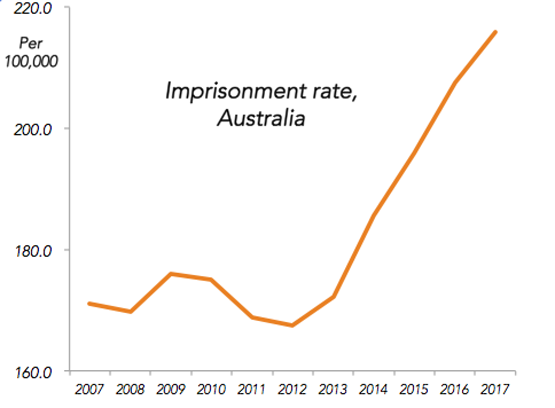 Our “secure facilities” are overflowing, with a 115.9% utilisation rate in 2015/16, according to the Productivity Commission, and the NSW state government is spending $3.8 billion on new prison beds.

If we had a booming crime problem the echoing sound of so many doors slamming shut could be a good sign. But overall, crime in this country doesn’t seem to be in a purple patch. The ABS has great statistics on crimes committed between 2010 and 2016. Most kinds of crime are getting rarer.

Sexual assault was the only major crime to be much more common in 2016 than in 2010, rising from 19,000 assaults to 23,000. The most commonly recorded crimes – assaults and property damage – fell over the period. So did robbery. So did murder.

Does a wave of sexual assault convictions explain the swelling prison population? Nope.

The data does not say this is about angry meth-heads testing judges’ patience and ending up in the clink, but yes, that might well be a decent guess.

NSW, Victoria, Queensland, Western Australia and South Australia operate private prisons, accounting for 19% of all prisoners. Incentives matter: the interests of prison operators like Serco no doubt worm their way through the system, increasing custodial sentences via subtle pulls and pushes.

We pay on average $283 per prisoner per day to keep people locked up. One thing about increasing the denominator of that equation (i.e. prisoners) is it reduces the average, because some costs are fixed costs. The more people we lock up, the lower the cost per person.

The 2014 paper Privatisation of prisons: key issues, published by the Catholic Prison Ministry, points out that “handing the administration of punishment over to corporations will lead to conflict between the social interests of citizens as stakeholders and financial interests of corporations to maximise profits for shareholders.”

It is a tempting explanation and it is almost certainly pary of the story, but the truth is that despite the scale of private prisons they still aren’t large enough to explain the full rise in prisoners Australia is seeing.

The problem with remand

The single biggest factor fattening the prison population is remand. Nearly a third of Australian prisoners are yet to be sentenced. They’re being locked up before they’re found guilty. Unsentenced prisoners have more than doubled in number from 6000 to 13,000 since 2007.

It is easy for journalists to be tough on governments when they allow people out on bail and those people commit a crime. State governments are very sensitive to law and order accusations and have tightened their willingness to release people on bail.

But that comes with a cost. Thousands of people who are not yet found guilty – or are not even guilty at all – are spending tonight in jail. And we’re paying for it.

Incidentally, it would seem that not all the new prisoners want to actually stay incarcerated. There were 55 prison escapes in 2015-16 (the most recent year for which escape data is available). That’s nearly as bad as 2013-14, the worst year in recent history, when 57 prisoners got loose. It is also well above the annual average of 40.

Why aren’t we outraged by actual criminal outrage?

The Curmudgeon
Reply to  Xoanon

Hear hear. Subscription rates should be reduced by a dollar for each wrong use of apostrophes.

Thumbnail in Tar
Reply to  The Curmudgeon

Yes, yes, and flogging for the journalist!

I don’t know if it explains the rise nationwide, but I’d guess the 2012 murder of Jill Meagher by a parolee is responsible for a good chunk of that increase in Victoria.

“Incidentally, it would seem that not all the new prisoners want to actually stay incarcerated.”

And in other news, the sky is blue. Probably it’s not just new prisoners.

From The Australian Policy Handbook 6th edition: “A market remains a tool, an instrument to achieve preferred ends. A good tool used well will make a task easier; used badly, it may destroy the original policy intent. As it has turned out, not all private prisons are more efficient than state-provided institutions, and the record of some private job-placement agencies has proved controversial.”