Was Rupert Murdoch lured into a honey trap with a Chinese spy?

The Wall Street Journal claims Rupert Murdoch's ex-wife, Wendi Deng, is a spy. We take a look back at how their relationship blossomed to begin with.

Was Rupert Murdoch married to a Chinese spy for 14 years — and was he lured into a “honey trap” by her while still married to Anna Murdoch?

If this all sounds like the stuff of fiction, consider the extraordinary revelations about Murdoch and former wife Wendi Deng Murdoch over the past day:

The Wall Street Journal (controlled by Murdoch) is reporting that the FBI believes Deng could be acting in the interests of China, and warned Donald Trump’s son-in-law Jared Kushner earlier this year that US counter-intelligence officials believed Deng, now a prominent Chinese-American businesswoman, could be using her close friendship with Mr Kushner and his wife, Ivanka Trump, to further the interests of the Chinese government.

Michael Wolff, author of Fire and Fury: Inside the Trump White House as well as a 2008 book about Rupert Murdoch (The Man Who Owns the News), tweeted yesterday that Murdoch himself had made similar claims in the past: 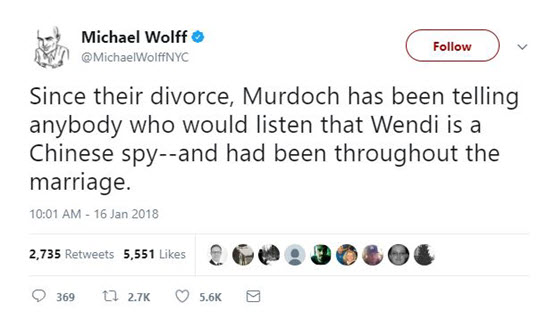 According to the Journal, the FBI believes that Ms Deng-Murdoch may have been lobbying for the US$100 million construction of a Chinese garden in Washington funded by the Chinese government. Officials’ were concerned that a 21 metre tower built as part of the gardens could be used for surveillance.

Murdoch and Deng met in 1997. They were introduced by Australian journalist and media executive Bruce Dover, who later wrote the book Rupert’s Adventures In China (published by Viking). Here’s how Dover described their first meeting:

I had introduced Murdoch to Wendi at a cocktail party at Hong Kong’s Harbour Plaza Hotel just before the July 1, 1997 handover celebrations. As an introduction, it was pretty straightforward: ‘Murdoch, this is Wendi Deng. Wendi is working with us in business development in China.’ Wendi was a Yale MBA graduate who had been with STAR TV less than a year. She was tall, attractive, intelligent, vivacious and confident, and immediately had the chief executive’s full attention. After the cocktail party, on the way back to the hotel, he remarked how ‘impressive’ he found ‘the young Chinese women’ present at the function. ‘Intelligent and full of enthusiasm … they’re the people who will change China and make it a superpower to be reckoned with. They should be running the country.

At the time, writes Dover, “few of us … had any inclination that the relationship between Murdoch and Anna — after 30 years of marriage — was in serious trouble and headed for the rocks. I got an inkling once, when in the back of a limousine on the way from Beijing Airport to the hotel Murdoch was having a ‘yes dear’ conversation with Anna on the mobile phone, rolling his eyes upwards and frowning a lot. After the conversation had finished, he turned and said: ‘She wants me to slow down, spend time at home, go to all these silly functions … Makes me feel I’m getting to be an old man or something’.”

In the book Dover chronicles how the romance between Murdoch and Deng blossomed almost overnight. He describes Deng as hardworking and eager to learn, but also ambitious and single-minded in her desire to succeed.” She impressed everyone with “her energy, good humour and wit” and her “extraordinary ability to absorb information like a sponge, then process and regurgitate it … well aware of her charms, she was flirtatious with the mainly male executive coterie around her at STAR, and a good number of them were actively vying for her attention.”

And the book explains in detail how the Murdoch-Dengs, who married in 1999, worked assiduously to court the Chinese government, built a sumptuous house for themselves in Beijing and constantly tried to expand the News Corp empire in China.

Now that Murdoch’s Wall Street Journal has validated the constant rumour that Wendi Deng may be a Chinese spy, the obvious question is: was Murdoch seduced by a Chinese spy?

Could Rupert have married a Wendy to get his leg over Chinese authorities – all that “fresh meat” for his “news empire”?

Murdoch ‘telling anyone who would listen’, ‘constant rumour’? I think the media would have been shouting this particular news from the roof tops if that was the case. I have little regard for Murdoch, but this sounds fishy to me.

Me too Bref. If he was so concerned about her influence why hasn’t he said something about it before now. I think he’s up to something, probably trying to ingratiate himself or push himself into prime position for some sort of business deal wouldn’t surprise me.

Well it is one of the oldest spy tricks and their is no fool like an old fool with a pretty young woman. It explains a few oddities.

Why is there never any smut about Rupert and his exploits in the NewsCrap tabloid rags?

Exactly there must be so many skeletons in his closet he must have a safe lock on it, to stop them finding their way out. He would be like the Trumps I would imagine, he would have all his exe’s, bad business deals all tied up in a pretty bow of legal tape so that no one can tell or talk about what he gets up to.

Wendi Deng and Rupert Murdoch must have had an interesting marriage, each one of them working their hearts out to discover what the other was doing and for whom they were doing it. Even to the extent of chucking in a couple of siblings.

Venise it’s an interesting, thing but also her appearance at the televised Royal inquest into News of the World & the hacking scandal has a whole new light on it I would imagine. I would suggest the impression of being his supportive spouse, was more like, what’s he going to say & how can I protect my interests.