The story of Aziz Ansari and "Grace", as published on Babe, has done a disservice to both its source and sexual harassment reporting in general.

The last thing you want a breaking news story regarding a high-profile sexual misconduct allegation to sound like is a work of short fiction. Given our present model of justice overwhelmingly fails victims, with only 0.6% of sexual assaults in the United States resulting in prosecution, they need all the help they can get.

Yet, when on Sunday night a small millennial lifestyle publisher ran an account of alleged misconduct by actor Aziz Ansari, fiction was exactly what came to mind. Many on social media stated the story reminded them of the viral one night stand horror story Cat Person.

While all research suggests that false reporting of sexual misconduct is rare, the idea that accusations might be fabrication is still used as a cudgel with which to beat victims. High-profile allegations, which turn out to be false, such as Rolling Stone’s journalistically (and eventually financially) catastrophic coverage of gang rape at the University of Virginia further compound the emotional and legal troubles of real victims.

Given we live in a reality that has been meticulously set up through millennia of oppression to deny women justice; when your reporting seeks to do the opposite, you must be just as meticulous. Your story must meet the highest possible standards of accuracy. It must be precise with its details and crafted to protect the victim or victims both legally and from further trauma, as much as it is possible to do so.

This takes a team not just of reporters, but of fact-checkers, editors and lawyers. It takes a team that, in the financially challenged world of publishing, is difficult for all but the most established newsrooms to assemble. It takes judgement and experience.

If Babe had such a team, they’re more liberal in their expression than any legal department I’ve ever worked with — and I don’t break news. It focused on the story of “Grace”, an anonymous source who met Ansari at a party, exchanged phone numbers with him, then went on a date that ended in sex acts that left her feeling “violated”. Later in the piece, she’s more specific, stating “it took a really long time for me to validate this as sexual assault”.

The piece spools with details. Though the source is anonymous, there’s enough specificity about who she is that it would be easy for Ansari, or a third party, to identify her. It has the structure of a narrative, not a news report, beginning with how the pair met. It lingers on the details of their date prior to the incident.

After arriving at his apartment in Manhattan on Monday evening, they exchanged small talk and drank wine. “It was white,” she said. “I didn’t get to choose and I prefer red, but it was white wine.”

The story went viral, as the outlet knew it would. Now these narrative excesses are being untangled, and used as a rope with which to hang the source’s credibility.

There are other slip-ups from Babe too. In the initial piece, a caption contradicted some of the reporting: 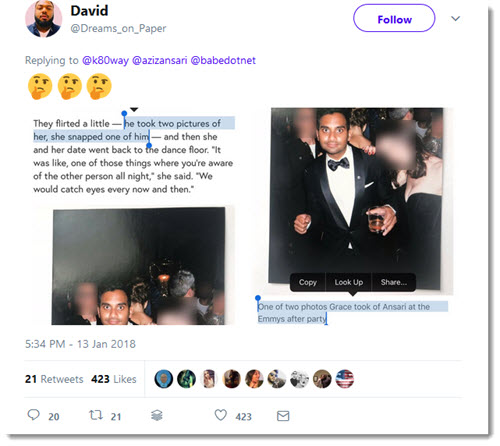 Later, the error was corrected, but the site has not made an explicit note of the change. 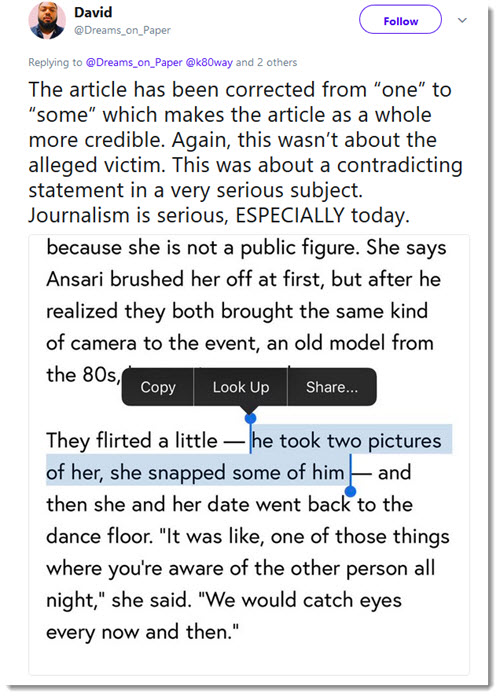 The story was published without a content warning, prompting others to offer one in the website’s place.

These failures in judgement speak to a publication that was ill-equipped to handle the story it sought out. At this delicate juncture, sexual misconduct allegations against powerful men must be treated with expertise and precision, lest the slow draining of pus we’re currently experiencing be dismissed as nothing more than tawdry gossip, a project not worth undertaking. The more outlets that bungle high-profile sexual assault reporting, the more likely the topic is to be shuffled back out of the limelight.

Unfortunately, the stench of trash carries — wafting over more accurate, thickly sourced reports. It turns people off. Imprecise coverage does everyone a disservice — from those engaged in armchair conversations, to those central to the story.

Babe’s account is so opaque, it’s not clear if or when Ansari committed a crime. If the piece’s intention was primarily to expose hypocrisy — to force Ansari to admit he’s an ally by day and a fuckboi by night — then couching the piece in language that implies that a criminal offence has taken place does a disservice to Ansari. Ansari has stated, “It was true that everything did seem okay to me, so when I heard that it was not the case for her, I was surprised and concerned. I took her words to heart and responded privately after taking the time to process what she had said.”

Conversations around sexual callousness and entitlement should happen — but they should not be presented as breaking news of the same ilk as Weinstein, Spacey or Glenn Thrush. The writer’s use of the hashtags #TimesUp and #MeToo when she first presented her piece to the world suggested she was seeking a scoop on that level.

If the writer genuinely believed Grace to be the victim of sexual misconduct, then the disservice to her source is even greater. Babe proudly declares it’s for “girls who don’t give a fuck”. But sexual misconduct, and its reporting, requires serious fucks be given. Otherwise the victims end up retraumatised and everyone gets sued.

If Babe genuinely cared about their source, they would have used their industry connections to get Grace in front of a reporter at a credible, mainstream media organisation. A more experienced journalist would not just have checked the facts of whether Grace met Ansari at all (the bare minimum, which Babe did), she would have handled the facts of the encounter itself with far greater delicacy, and perhaps initial, protective scepticism. She would have pushed for clarity. She would have done more groundwork. Perhaps she would have discovered Grace’s experience was one incident in a broader pattern of behaviour. Or perhaps she would have advised that, unpleasant as what transpired was, the consequences of going public were likely to be compounding, not cathartic.

Alyx is a Sydney-based writer, editor and social strategist.

Can I do anything to discourage Crikey from publishing this writer again? The article is poor. And the NYT and Atlantic articles referenced are classic pieces of misdirection and should not be promoted as anything else. The subject is too important to be handled this roughly.
To me this read as a reminder to women (and journalists) to keep quiet unless you have a clear crime and evidence approaching that of a legal prosecution. I think if there are any realisations happening at the moment, one is that we are going to have to listen to (and even believe) stories which don’t satisfy that requirement.

Unfortunately, given the large number of cases of sexual misconduct/assault that do really occur, some women will lie. Once this was to hide the shame of being caught out in less sexually explicit times (yes I know it is a small number). Sometimes it is mischief, but more often revenge for some slight. I once knew someone who had completlely false allegations of inappropriate behaviour to a child raised. They were speedily disproven, but child and parent both lied. Alas this muddies the water in front of the real cases. This story smells of fish in the sun too long. Meanwhile in that demented country, rich boy walks after assaulting a near comatose girl because daddy probably helped the DA or the judge get elected.

‘Some women lie’ but ‘some men lie too’. The idea that women lie while men are their hapless victims is well entrenched in our culture where women are rarely believed. In a Muslim court it takes the word of two women to counter the oath of a man. In Western culture it appears to be more like 4-20.

For what it’s worth this story about Ansari has been savaged by prominent and random women since becoming published. It’s clear that “Babe” is using Ansari as a marketing tool with complete disregard for his personal or professional rights with the (presumably unintended) consequences of diminishing real cases of abuse and intimidation. “Babe” has a few defenders who must think that any man is fair game if he doesn’t leave you glowing after an encounter, however they seem to be few & far between.

It isn’t worth much to have people pillorying the article. The point of it is there are too many men who are predators who are busy putting notches on their beds rather than playing fairly with women and with respect. It seems that those who are guilty of predatory behaviour where women are less than enthusiastic but cajoled into sex are annoyed that they might be shown in their true colours. Of course they will condemn an article showing someone who could be them, as a predator. There is more than one man in the world who claims to be a feminist as it lowers a woman’s guard against him. These men are abhorrent and should reflect on their behaviour.

Are you putting Ansari in the “predators who are busy putting notches on their beds” category? If not then maybe save your condemnation for another story.

“Given we live in a reality that has been meticulously set up through millennia of oppression to deny women justice…”
Would there by any chance be another side to this uni-dimensional description of reality?
Yet another example of postmodernist drivel declared as objective fact. As the postmodernists would have it, reality is nothing but a power struggle of oppressed versus oppressor. The brilliance of this neo-Marxist sleight of hand is that you can identify alleged oppression, declare that you’re on the side of the oppressed, claim moral virtue, and then repeat this process forever.
Surely it’s not only me that’s noticed a recurring theme of postmodern orthodoxy in Crikey over the past 2-3 months. Can’t compete in a hierarchy of competence? Then declare it an inherently oppressive structure and shriek that it must be torn down.

Check out Stephen Hicks’ Explaining Postmodernism: Skepticism and Socialism from Rousseau to Foucault. It’s worth knowing exactly where this reprehensible ideology comes from and the kind of anti-enlightenment resentment that drives it.

You’re living in a strawman bubble with this one JQ. You should get out of the house more often.

How have I mischaracterized either postmodernism or this author’s quote?
Have you read Hicks’ book? Do you care to present your steel-man argument in favour of postmodernist doctrine? No, much easier to declare that I’ve constructed a straw-man argument to dismiss.
Would you describe our society as having “been meticulously set up through millennia of oppression to deny women justice”? Then what do you have to say about women’s equality before the law in the West, or about legislation that bans unfair discrimination on the basis of sex? Would you say the invention of the contraceptive pill oppresses women?

A named high profile person, of colour – for extra points, an anonymous accuser and a very odd narrative do not help real victims of bad behaviour & crime.
There could be a very simple reason why ““it took a really long time for me to validate this as sexual assault”.