Why is Tennis Australia receiving millions in government grants?

The Australian Open is in full swing, and the main focus so far has been on how unbearably miserable Bernard Tomic’s life seems to be. But Crikey has spotted another noteworthy point, away from the court: despite making hundreds of millions of dollars in revenue every year (and millions in profit), Tennis Australia is receiving millions in government grants. 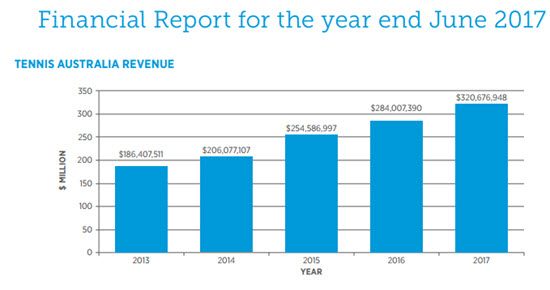 One of the items under “Other” is government grants.

The report reveals “The Group has been awarded government grants from the Australian Sports Commission (‘ASC’), Department of Foreign Affairs & Trade, Department of Health & Human Services, Department of Infrastructure & Regional Development and Visit Victoria. One of the grants from the ASC relates to a sport grant and is dependent upon the Group supporting its sport development initiatives, including the implementation of recommendations arising from the High Performance Advisory Panel”.

In 2017, the group received $5.2 million from these sources, and in 2016, $5.4 million. We got curious and followed the reports back to 2008. And it’s roughly the same every year — Tennis Australia has received between roughly $4 million and $5.5 million in government grants totaling $48,973,782 since 2008. This figure is dwarfed by the $1.98 billion it has generated in revenue over the same period of time. The question must be asked — why does Tennis Australia need any government assistance at all?

Beer and circuses.
Coupla megabucks to prevent us peasants getting any more revolting than we are.
Also it’s probably cheaper than the cost of bullets, teargas, fuel for the armoured cars and tanks, overtime for the military and cops and Pete Dubbo to oversee the suppression of any revolt.

Do other peak sporting bodies receive government grants. Think of the AFGL, NRL, Soccer, Rugby Australia, various Olympic sports. How much taxpayer money was lost with the unsuccessful soccer world cup bid? It has been suggested that the Australian GP absorbs upwards of $50 million each year. The new stadium in Perth has been costed at $1.5 billion, and Sydney is looking at spending $1.2 gigabucks on replacing two existing stadiums.

Make that 2.1 Gigabux. For the Sydney replacement of 2 perfectly good, not that old stadiums. The new ones will have same or less seating capacity.

The Australian Grand Prix Corporation has received more than a billion taxpayer dollars, all based on misleading and deceptive claims.
That is easy to getaway with if you’re a government agency: no scrutiny by ACCC, no history of annual reports on the website and all covered by bi-partisan political support.
Tennis Australia’s government support is tiny in comparison and they are honest and accountable.
Peter Logan
Save Albert Park fact checker

To update the old axiom, “$port is the opium of the people”.
As Lenin didn’t sing, “keep you drugged with sport, sex & TV”.