Seven News Melbourne's news director has defended an interview with neo-Nazi Blair Cottrell which painted Cottrell as a right-wing activist with a community focus, and did not include any of his convictions (which include arson and making threats to kill).

Seven boss: neo-Nazi interview was ‘newsworthy’. Seven News Melbourne’s news director Simon Pristel has defended a story and interview with neo-Nazi Blair Cottrell. The report, which didn’t include Cottrell’s convictions, has been widely criticised, and reporter Jodi Lee has now deleted her tweet with the story. Pristel told Fairfax he stood by Sunday’s “exclusive” story: “Seven News has reported on many meetings in the past couple of weeks held to discuss the African gang violence crisis, including governments, community leaders and police. Sunday’s meeting was newsworthy so it was reported.”

The Grauniad‘s terrible new look. Well goodbye Grauniad! In the UK, buying The Guardian had been one of the last extant newspaper pleasures for your correspondent. The Graun is losing its elegant slimline “Berliner” size, halfway between broadsheet and tabloid, which has been better than the old broadsheet. Adopted at the point where The Independent (now online only), and Times went tab, the cool blue, lowercase look bespoke elegance, even if the articles inside were increasingly lifestyle bollocks.

But the Berliner format was also stinkingly expensive, requiring special presses. They’d been bought by Alan Rusbridger, editor from 1995 to 2015, who oversaw the Graun’s rise to global peaks — which it then teetered on the edge of, as financial disaster loomed. Under Rusbridger, the paper burnt through 25 million quid losses year on year, exhausting the income from the Scott Trust, created to support it in perpetuity, and causing it to sell the car sales magazine that had been its cashcow.

The paper will take another hit from abandoning the “Rubbisher” format (as Private Eye dubbed it). But the cheaper tabloid format that the paper is switching to reveals why they had avoided it for so long because … well, it looks terrible. And terrible choices have been made. 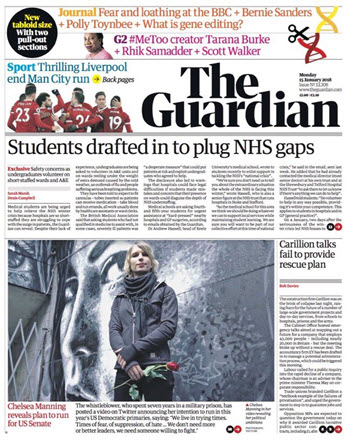 A fat serif font has been chosen for the headlines, which makes the paper the appearance of a giant circus ad. The masthead looks skew-whiff. The blank space is all wrong. Some of this will be improved no doubt, but compared to the earlier designs, it has a committee-sourced look of compromise and exhaustion. Buying the paper — at two quid a pop! — was an aesthetic act. Alas, no longer. Another bewildering choice, from a paper with an ability to get much wrong among much right, often on the same page. — Guy Rundle

Erin Molan confirmed as new Footy Show host. The NRL Footy Show‘s new host is Erin Molan, the Nine Network has announced. In a picture story for the Daily Telegraph today, Molan — who is due to give birth in the middle of the footy season — weirdly assured readers she was a “journalist first and foremost”, and wouldn’t be “telling viewers how swollen my feet are”. Good to know! Although given some of the online reaction to having a lady-host on the show, perhaps she felt she should clear up that she would, in fact, still be reporting on football. Molan will host alongside Beau Ryan and Darryl Brohman, but not long-time host Paul “Fatty” Vautin, who found out last year his services on the show would no longer be required.

Publishers respond to Facebook changes. Media bosses have reacted to Facebook’s News Feed changes — which will prioritise posts from friends rather than news organisations. AdNews reports that most local publishers have been cautious in pre-judging the impact on their business models, and some anonymous executives think it will help weed out some of the publishers just going for social media clicks, as well as addressing its problem with fake news:

One Australian media exec, who wished to remain anonymous, says the move has been over exaggerated in the media and really it’s just Facebook’s way of legitimising the platform following its fake news sagas in 2017. It’s Facebook’s way of fixing fake news, but they can’t come out and say that because it would be an admission of guilt,” he says.

Grundle was too kind about the graun’s appalling new look – dunno about the dead tree version as I stopped buying it after it went Berliner and upped the price and lowered the content of the ..err..content – but the site is beyond appalling,large vacant acres with the occasional headers painfully eye piecing red.
The weird thing is that no doubt some consultants earned bigly for advising this further dumbing down – finally it is a red top.