‘Milkshake duck’ is the Word of the Year we deserve

Following Macquarie Dictionary naming the 'Milkshake Duck' -- a term extremely "of the internet" -- as 2017's word of the year, Crikey speaks to its creator about reconciling with online silliness that has spilled into the real world.

Macquarie Dictionary has made its pick for word of the year and, depending on how much of your life you spend online, it’s either a source of total vindication or confusion. 2017 was the year of the “milkshake duck”.

Let’s address the confusion first: Macquarie has defined the phrase as “a person who is initially viewed positively by the media but is then discovered to have something questionable about them which causes a sharp decline in their popularity”. It is a term that has been used to describe Ken Bone, the questioner-turned-meme from a 2016 presidential debate whose internet history proved to be less cute than his new persona; and Florida’s “hot cop”, who met a similar fate.

Just like the phenomenon it describes, “milkshake duck” was born on the internet and is extremely of the internet. The term comes from a 2016 joke from prolific Twitter account @pixelatedboat, run by Australian Ben Ward. 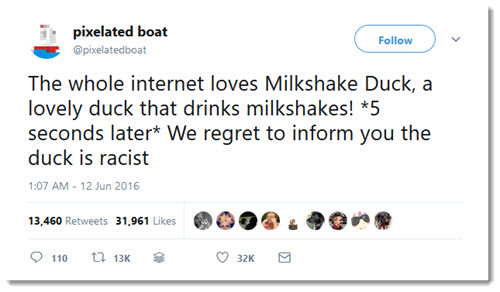 “It was kind of a throwaway joke when I tweeted it in 2016, and it didn’t get much attention till about six months later, so it’s crazy to see it get this far.”

A glance at search results on Google Trends confirms this, with the phrase only gaining small general interest (outside Twitter) in June last year. @pixelatedboat describes the attention — through today’s news and otherwise — as “very, very weird”. This morning, he retweeted a Guardian report of the Word of the Year announcement with the single line, “I’m so sorry”.

It’s not the first news that’s been made from @pixelatedboat’s Twitter account. Earlier this month, The New York Times described one of his tweets (and the mess it created) as either “a sign of the imminent collapse of critical thought and public discourse or the first great meme of 2018”. Informally known as the gorilla channel tweet, the post featured a fake extract of Michael Wolff’s Fire and Fury claiming White House staffers had compiled a 24-hour broadcast of gorilla fights to appease the president. Upon going viral, the joke was taken as fact.

“When I wrote that tweet I thought I’d made it ridiculous enough that it would be clear it was a joke, so it’s kind of troubling that a lot of people took it seriously,” @pixelatedboat says. “I was surprised it got as big as it did. I guess there’s an insatiable desire for anything that makes Trump look bad, and somehow all the actual news about Trump isn’t enough.”

“A general problem with doing jokes on the internet is that you write them for an audience that knows you and understands the type of jokes you do, but if a joke goes viral it spreads to an audience who don’t know the context of the joke, so it’s easy for the intent behind it to be lost.”

“It’s almost impossible to do satire that won’t be mistaken by someone for the real thing. I guess that makes me part of the Fake News problem.”

Milkshake duck is a little simpler than all that, though @pixelatedboat says it is being slightly misinterpreted. “A lot of people are using it to refer to any popular famous person who gets in trouble,” he says. “That misses the part where it’s a joke about a sudden backlash following sudden viral fame.”

The irony of that fate hanging over his own head, isn’t lost. In June last year, @pixelatedboat tweeted “It’s terrifying that I created a meme that will destroy me when I inevitably do a problematic tweet. Milkshake Duck is my sword of Damocles.” Though the sword is yet to drop, some are now joking the mainstreaming of the term in the dictionary brings it ever closer.

There’s something perpetually cringeworthy about Word of the Year announcements. At their worst, they’re nothing but a PR exercise confected to outrage linguistic purists and generate headlines about how we’re all desperately out of touch. But at their best, they generate debate about the ongoing evolution of language; they signpost how our culture is changing, and what new expressions we need to communicate in that space (for better or worse).

Milkshake duck may be the perfect synthesis of both. At the very least, I think we can all agree it’s more interesting than “kwaussie” and “youthquake”.

Talking tactics: we analyse just how Scott Morrison manipulates the narrative to get his own way

Cheez us, we’re going a stupid as the Seppos.
What a waste of electrons in publishing this and me downloading it.

Nobody could be that dumb but using ‘signpost’ as a verb comes too close for comfort.

Funny watching The Dum last night as they discussed this.
No mention of examples like “Rolf Harris”, “Geoffrey Rush”, “Craig McLachlan”, “Nick Kyrgios” (where is he sitting in the media firmamnet at the moment, with a sniff at the Oz Open in the air) and no mention of the starry eyed media penchant for lionizing and commercializing in “making stars”, to promote individuals, without reservation or question?

Umm, fundament? As in …hole?

The first thing Macquarie need to do is to change their own definition of the word “word”. That is, a word has to be less than two words. Is Homer Simpson on their word of the year committee? I am just glad they don’t write technical manuals for nuclear power stations (or the aviation industry) where precise grammar counts.

Without apologies to ST Toille “this is how the world ends, not with a bang but a twitter“. Hollowed out.
Content free and guaranteed to cause cancer.

Is there anything substantially different in ‘milkshake duck’ from ‘tall poppy syndrome’?

my question also. one is the juvenile version.