The sacked co-host of Melbourne's top-rating FM radio breakfast show Anthony 'Lehmo' Lehmann has told the Sunday Herald Sun of his shock at getting the boot from Gold FM.

Lehmo’s shock at radio sacking. The sacked co-host of Melbourne’s top-rating FM radio breakfast show Anthony ‘Lehmo’ Lehmann has told the Sunday Herald Sun of his shock at getting the boot. He and Jo Stanley were told their Gold FM show wouldn’t be back on air this year at the same time they learned they’d won the November ratings:

We were number one and then we got sacked. We were idiots. We should never have gone to number one. I have spoken to Jo, and said we got ahead of ourselves, it was a mistake to work so hard and get ourselves to number one. If we had our time again we would stay middle of the pack and we possibly would still have a job.

‘I’m not dead!!!!!!’. British media including the BBC have had to apologise and correct stories after reporting a Big Brother star was dead, when she was actually very much alive. A tweet on Rebekah Shelton’s account said she had died, which was widely reported before she posted again, implying that her account had been hacked. 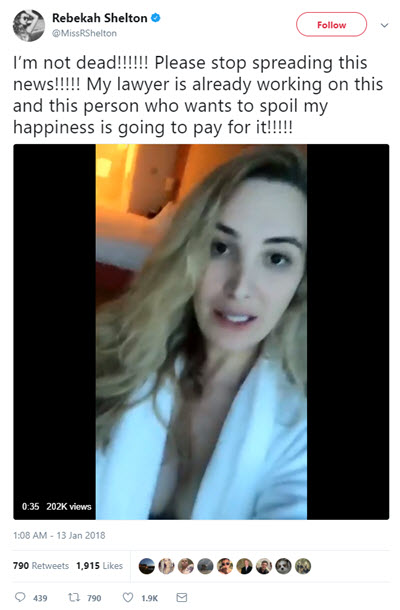 The poetry of translating Trump’s ‘shithole’ comment. US President Donald Trump’s reported comment countries such as Haiti, El Salvador and several across Africa are “shitholes” —  “Why are we having all these people from shithole countries come here?” he reportedly asked during negotiating immigration laws with US lawmakers — is entirely on brand for him. Apart from reiterating every image of him as a boorish, ill-informed, incurious bigot, it reiterated how his approach to language (rambling incoherence interrupted with the odd burst of profanity) presents challenges to the media, both in the US and internationally. Just as “grab ’em by the pussy” required publications to decide what was acceptable to print, a slang term like shithole presented international outlets with the need to translate the term.

As the Wall Street Journal noted:

Mashable has put together a handy list of all the translations they could find for the phrase which range from fairly direct to “I can see what you’re going for there” to  to oddly poetic. Haiti went for “hole of shit” while Finland had “asshole countries”. El Slavador ran with “fuck holes” while Taiwan translated to “countries where birds don’t lay eggs” and South Korea said “beggars’ haunts”. — Charlie Lewis

The Ghan by the numbers. SBS’s second go at slow TV over the weekend peaked with an audience of 69,000 metro viewers. The network ran 17 hours of The Ghan following a successful three-hour edit last weekend. According to MediaWeek, the program started at 3am with 7000 metro viewers, and across the day measured 4000, 25,000, 63,000 and 52,000 for the five legs of the journey.

The format is based on a Norwegian series that debuted in 2009 with a seven-hour unedited train journey and a nine-hour knitting marathon played out in real time. Finnish and British broadcasters have had a go at the concept, there are ‘slow TV’ offerings on Netflix, and now SBS has had a crack in the local market.

The irony of Trump’s appeal for more nice white Norwegians to come to the US is that most Norwegians probably regard the US as a, you know, “what Trump said country.”

Trump and his Shite House.

A Chinese friend told me that the chinese equivalent was “a land where birds don’t lay eggs and dogs don’t defecate”. Which apparently connotates a remote and uncivilised place. Thanks to Trump I am learning lots of new things.

“a Big Brother star”. Star. Says so much about us now.

Norm – agree. Who gives a flying?

The BBC’s R4 has a daily “slow radio” segment which is mostly wind soughing, bird song, rustling leaves and large blocks of blessed silence.
On weekends the Saturday evening news has 2 minutes of one line comments by people about their daily life – funny, heartening, sad and uplifting.
As to the cost, doesn’t even require a rag on which to have the smell of oil.