The lasting legacy of Martin Hamilton-Smith ... Powershop's energy crisis ... Mark Latham: coming to a dystopian future near you ...

Hamilton-Smith’s legacy? On Tuesday we took you through the career of perpetual malcontent Martin Hamilton-Smith, who went from a South Australian Liberal opposition leader, to an “Independent Liberal” holding a ministerial portfolio in a Labor government, to shilling for Nick Xenophon’s SA Best party. Hamilton-Smith happily recounted some of his career highlights in the press release announcing that he would not be recontesting the seat of Waite in the upcoming election, and Premier Jay Weatherill said Hamilton-Smith had made an “outstanding contribution” to the state. One person who may not be quite so happy with the Hamilton-Smith’s legacy is Duncan McFetridge. McFetridge also ditched the South Australian Liberals and was also planning to run as an “Independent Liberal” in the upcoming election — but under new laws, which may as well have been passed with Hamilton-Smith in mind, he would have to get written permission from his former employers to do so.

Powershop in the midst energy crisis. We hear Prepaid electricity retailer Powershop is having meter reading issues in Victoria and NSW, with smart meters not being read for over a month — affecting  over 25,000 Powershop customers in Victoria (and a small number in New South Wales). We asked Powershop what the go was, and a spokesperson told us a implemented a firmware upgrade in November last year  had the effect of resetting the meter readings to zero, insisting “no meter data was lost in this process”.

“This change effected the Powershop systems and how we display our customer energy usage for them and how we bill them. It has affected just over 20,000 Victorian customers and we’re aiming to get this fixed by the end of January,” they said. “Customers have been emailed twice to keep them informed as we work on a fix.”

AMRAP it up. There has been a bust up between the Community Broadcasting Association of Australia and the Australian Music Radio Airplay Project. AMRAP, an initiative aimed at getting new Australian Music played on community radio stations, have walked their staff of six out of  of the CBAA office. Emails sent to musicians who use AMRAP said it had “become untenable to perform Amrap duties under the management of the CBAA … In late 2016, Amrap’s dedicated advisory and finance committee, which was independent of the CBAA, was disbanded  In December, the CBAA began implementing a restructure that dissolves Amrap’s proven effective self-contained structure, and benefits the CBAA at the direct expense of Amrap’s transparency, integrity and innovative future.”

AMRAP are now campaigning to have the Community Broadcasting Foundation cancel their management contract with the CBAA — they’re off to a good start from the looks of things. Industry Observer reports that over 500 letters of support have been sent by musicians, broadcasters and music companies to the CBF.

Mark Latham’s Black Mirror Pilot. Earlier this week, Mark Latham put out a chilling vision of the future where the apparent push to “abolish” Australia Day has been successful. A future where people keep paper shredders in their kitchens to destroy all those patriotic craft projects their children do, where the CCTV cameras survey butchers to ensure no one has an Australia Day barbecue. A future where severe aged-care nurses chastise lamington-scoffing men for talking about the “good old days”. If you’ve not seen it, please do, it really is quite the thing. It has the same nightmare logic and cold sweat atmosphere of a certain British dystopia show. Or so one Twitter user thought it would be funny to make Mark Latham believe.

Elijahman Young tweeted overnight a series of messages he apparently sent to the Mark Latham’s Outsiders Facebook page posing as a producer on Black Mirror, telling Latham “we would like to know if you be interested in having a discussion about adapting your storyline into something the Black Mirror series could use?” 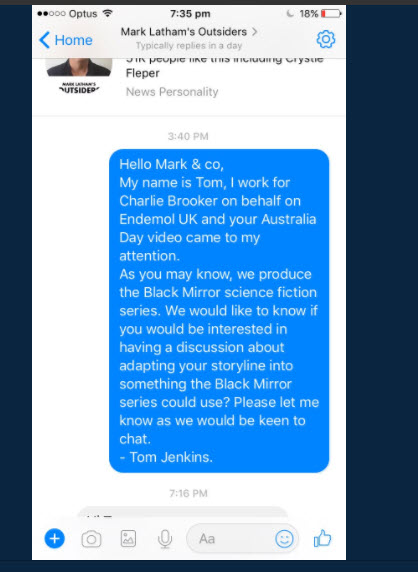 Latham is initially sceptical (“What is Black Mirror all about please?”) but, having done some googling, swiftly warms to the idea (“I can see you guys are a serious operation.”), re-pitching his ad:

Our ad takes up a  dystopian theme, a world of PC gone mad, an Orwellian scenario of what our country would look like if the PC madness extended to the abolition of our national day (a big political debate here). 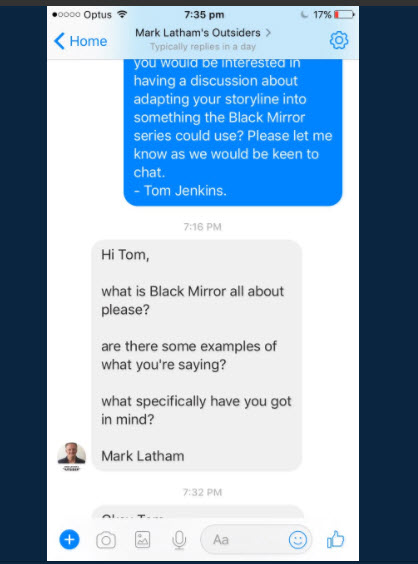 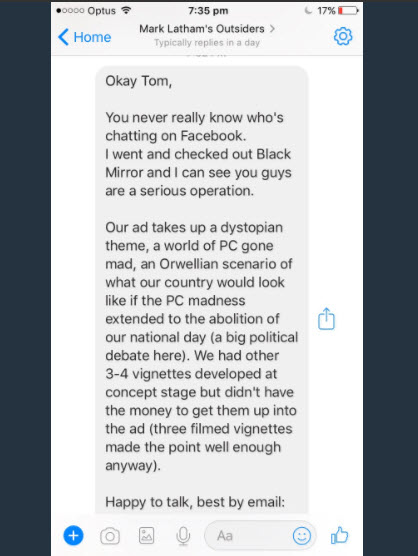 He also refers to the segments of the ad as “vignettes”, so the Black Mirror guy knows he gets story telling. In any other context, this would look like someone totally out of touch and incredibly willing to believe things he wants to hear.

Budget signals the ‘beginning of the end’ of community radio

How would you like to spend an Australia Day in Latham’s head – then write a book “Malice in Blunderland”?

klewi – that sounds more like a hagiographic account of Dunnuttin.
Surely mad marky’s peregrinations would be “Clueless in Cretinland“?

Eternal Total War on Christmas. It drags on into January now. Can they keep it going until Easter?

Stupid clips like that one are not worth anyone taking even half seriously. The date is insulting to those whose land was taken, and should be changed if most First nations want it to be. This is just respectful, not indicative of mind control. The man needs to get out o f his bubble and talk to those who feel hurt by the date.