Yet another Australian news satire website has launched, with rather strong echoes of its biggest rival in the game, The Betoota Advocate.

Fake news. Yet another Australian news satire website has launched, with rather strong echoes of its biggest rival in the game. The Aussie Advocate has billed itself as “Australia’s newest kid on the block of satire news websites”, and its name and website feel pretty similar to those of The Betoota Advocate, launched in 2014. 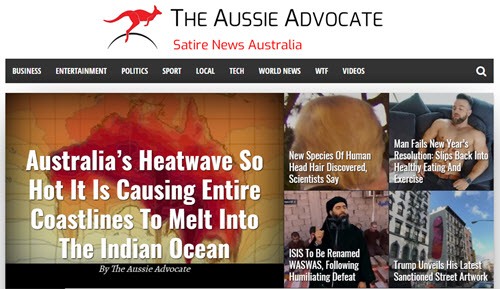 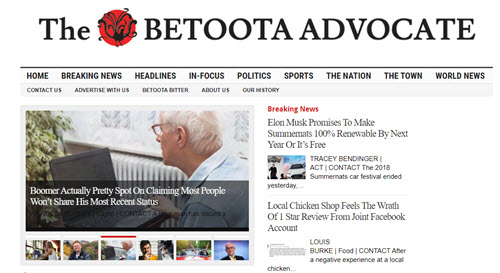 The newer site’s editor “Steve” told Mumbrella he would be differentiating his site by “bringing fresh ideas and perspectives to the Australian satire news marketplace”.

Good feud guide. The Daily Mail and Virgin Trains in the UK have been caught up in a public war of words as Richard Branson’s company has stopped selling and giving away the conservative newspapers on its trains as it’s “not compatible” with its beliefs. The Mail was one of only a few newspapers to be available on the train services, but it will no longer be stocked. The Guardian reports that an internal staff memo said staff had been concerned “about the Mail‘s editorial position on issues such as immigration, LGBT rights and unemployment”. The Mail has responded by calling the move “disgraceful” and “censoring”.

The revolving door. Huff Post Australia‘s head of lifestyle Leigh Campbell has landed a new job at Mamamia as executive editor. Huff Post‘s Australian joint venture with Fairfax ended last month, with most of the local staff made redundant. Campbell was previously beauty director at Cosmopolitan Australia and lifestyle editor at Shop Til You Drop.

News UK revenue falls. Judging by the latest accounts, it might be time for Rupert Murdoch to shift his focus back to his UK print operations, rather than the revamping of his US cable TV and film assets and duchessing the attention-seeking US president. Revenues at the UK print operations worsened in the 2016-17 financial year, and profits were next to non-existent. Management blamed the weak UK ad markets (due in part to the impact of the Brexit vote which The Sun vociferously championed) and continuing costs associated with the phone hacking scandal (which has been all but wiped from the Murdoch corporate memory, but not the financial accounts).

The profitability of the two companies and three papers slumped, especially at The Sun which suffered a pre-tax loss (a favoured measure by the Murdoch empire’s bean-counters and Rupert himself) of more than 75 million pounds.

The publisher said that stripping out restructuring and one-off costs meant that it made a profit of 6.9 million pounds — less than half the 15.2 million pounds reported for 2015-16. There is an irony here — because of UK corporate law and its reporting requirements we know more about the financial health and performance of News Corp’s UK papers than we know about those in Australia and in the US, which is not good enough. — Glenn Dyer

ISIS changes name to WASWAS is a good joke at least.

Barely. Looks pretty average, and even Betoota is pretty lame most of the time (Clickhole is the gold standard). Not looking forward to this turning up in my Facebook newsfeed. At least the execrable SBS Comedy is no more!