You can’t sit with us. Australia’s political leaders have not publicly distanced themselves from the US under the presidency of Donald Trump — the rhetoric, both public and private, remains as, shall we say, deferential as ever. But other official circles are apparently taking the new administration’s chaotic approach more seriously. We hear Australian staff at the United Nations HQ in New York are distancing themselves from their US counterparts, avoiding being seen with them in social situations. This, we are told, is a result of US delegations failing to follow proper protocols, missing meetings and generally being perceived as disruptors. Know more? Let us know.

Chook Dad’s daughter gets roasted. Yesterday, the story of Chook Dad (or Adrian Brennan, according to his driver’s licence), the 58- year-old dad who chased a young shoplifter into a Coles car park in Bowral to demand he return a roast chicken he hadn’t paid for, became something of a journalistic Rorschach test. It was either a young hoodlum getting a deserved clip round the ear, reflecting the height of harmless daggy dad tomfoolery (“there’s no such thing as a poultry crime,” Brennan told the local paper, which, wait, did he specify to the writer which way he was spelling it?) or a grotesque systemic injustice in action (a middle-class dad being valorised for taking food from what some hypothesised was a hungry and desperate young man) depending on the reader. A classic study in milkshake duck-ery (or, at the very least, a story that should have stayed in the local paper getting dragged blinking into the national spotlight), the story initially contained tweets from Brennan’s daughter Lucy, describing Adrian as a “local hero”.

And Twitter — being what it is — immediately set to work. “Wow your dad is a fucken hero for stopping a teenager from stealing 30 bucks worth of food from a company that made $725.3 million last half”. 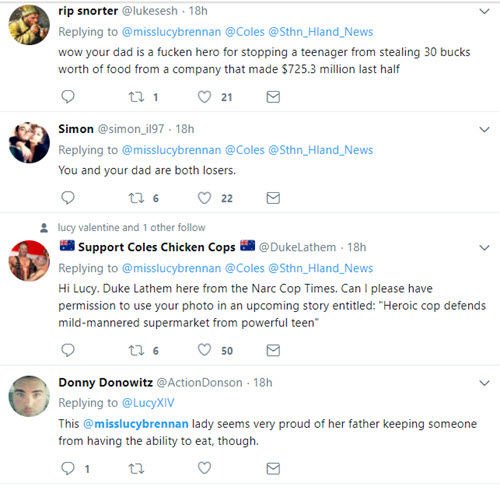 Brennan (who you would think would see something like this coming, being a media adviser in the New South Wales government, according to her LinkedIn) has since locked her account, and her tweets have been removed from the majority of articles about the story.

Security officer a-salted. On Monday we brought you a short history of the development of security measures at Parliament House. Little did we know, that our work would be rendered obsolete within days. For no history of security in Parliament House could be complete without the story reported in The Guardian today. Back in November a senior security officer came across an unidentified white powder in a populated, public area of the building and decided the thing to do would be to taste it. The act — which apparently exposed the officer to nothing more harmful than salt — has been described as “recklessly ignoring proper protocols”, “Russian roulette” and having “no place in parliament house or anywhere else” by a bunch of joyless scolds who “specialise” in “security” and “safety procedures” concerning “potential powder threats”. Meanwhile, we here in the Crikey bunker have identified our first contender for person of the year.

*Heard anything that might interest Crikey? Send your tipsto [email protected], use our guaranteed anonymous form or other ways to leak to us securely

COMMON SENSE NOW AN OFFENCE! Anyone exercising common sense must be held accountable, vilified or mollified.

Too cool for skool – it’s not AI we need worry about but organic stupidity.
Rules are to save the effort of thinking.