Why do newspapers now literally wrap themselves in ads?

In newspapers' heyday, they would never have dreamed of selling front pages to advertisers. But we're seeing it more and more for one reason: Money.

There once was a time a newspaper wouldn’t dream of selling its front page to an advertiser. Back in those days, the front page was meant to sell what was in the paper, not pay for it. There was enough money to be made on advertising inside.

But even if you only buy a newspaper occasionally these days, chances are you’ve picked up a copy with the front and back pages dedicated to a paid advertisement, only to find the real front-page news underneath.

For newspapers across the board, the continuing decline of advertising revenue is nothing new. And the desperation for the advertising dollar is obvious.

In December, The Sydney Morning Herald sold four four-page wrap-arounds — one to the Commonwealth Bank, one to Notre Dame University, one to Singapore Airlines and one to streaming service Stan. Over the same period, its Melbourne stablemate The Age ran three wrap-arounds — two for Stan and one for the Commonwealth Bank. Even the Australian Financial Review gets in on the game on occasion, with a four-page advertising wraparound on an October edition, advertising a new Sydney hotel at Circular Quay.

News Corp papers are also happy to sell their front pages for some advertising cash, but don’t do it quite as often as Fairfax. 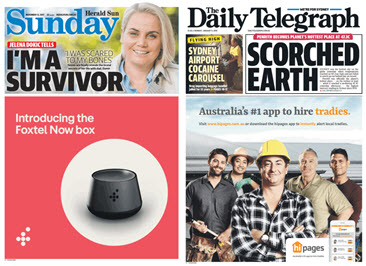 There’s an obvious and very simple reason that the papers are now willing to sell their front and back pages: money.

Media analyst Steve Allen told Crikey that 10 years ago, ads like these were a rarity, no matter the source.

“They need the money and that’s the highest-yield they’ll get and that’s why they’re prepared to do it. They would’ve tested whether the pick-up rate is less and they made a calculation and various publishers have come to the same conclusion — they get more than they’d lose.”

While wrap-arounds are likely discounted and tied in with long-term advertising deals, Allen said the four pages are worth far more than four individual full-page ads inside the paper.

“It’s a premium. The reason they’re doing it is that revenues are falling by double-digit numbers and it doesn’t seem to be relenting. Wrap-arounds are high-yield revenue.”

The price they fetch depends on the paper and its ad rates, but a single full-page ad in The Australian could fetch $60,000 if it was sold at full price (which they rarely are).

But Allen doesn’t think there will be a time that every front page will be handed over to an advertiser.

“There are some advertisers that would never been allowed to do a wrap, regardless of the price. There is some sensibility of what style is allowed and I don’t think they’ve overstepped the mark yet.”

Wraps usually tie in with a huge advertising blitz, or an event. Fairfax’s Commonwealth wraps have both been part of an advertising blitz and PR push, and Holden’s coincided with its last factory in Australia closing.

“The whole reason for doing wraps is sheer impact,” Allen said. “Whether it really comes out the right side of cost-value effectiveness, you know if you’re doing a wrap you own the paper. If it’s not ground-breaking, it might be money wasted at the premium you’re going to pay.”

Face masks are big news, but for news.com.au they’re also a money spinner

What I cannot understand is why companies would pay bigbuck$ to advertise in that manner – who does not discard the wraparound instantly, without even a glance?

It’s brand awareness. Even if people don’t buy the paper they’ve probably seen the ad at a newsstand, at their place of business, at a café, etc.

Good to see newspapers finding a way to sell advertising. It’s not new though. The London Times was one of the last to have its front page covered with classifieds. Now it’s wrap-arounds, good luck to them if it pays for the news inside.

At least we know the wraparound an ad, as opposed to Fairfax’s China Daily insert. Bugger giving the People’s Republic their own paper, the have enough propaganda as it is.

Maybe they could use Mini Mr Bean as an editor?

It’s all online for me now. The ‘papers’ are clearly a threatened species. Crikey!

When you look at the crap in them, good riddance.
I obtain the accumulated SMH once a week from my local library, purely for the xword/puzzle, and find that they have rarely even been perused – the cog bites on the edge are often unseparated.
Rather as when one acquires an ancient library, probably bought by the yard, and find most of the volumes uncut.

LOL Just imagine when the Royal Commission into Banks gets underway… A wraparound featuring “Whichever Bloody Bank”, will have all the pulling power of a Craig McLachlan revival season of The Rocky Horror Picture Show. :-p