Walkley Award-winning cartoonist Ron Tandberg has died, remembered by his colleagues at The Age for his wry humour.

Vale Ron Tandberg. Beloved cartoonist Ron Tandberg has been remembered by colleagues from The Age, following his death on New Year’s Eve from cancer. In an obituary for The Age today, colleague and friend Tony Wright has remembered the Walkley Award-winning cartoonist’s wry humour:

He was in the practice of discussing over the phone the main stories of the day with news editors and other journalists before creating his cartoon. During such discussions, it was almost possible to hear his considerable mind turning over the details and distilling the circumstances into just a few lines of his artist’s pen … For journalists, getting such a phone call and knowing Tandberg was preparing a cartoon for their story was as good as getting a story on Page 1.

Producers react to Craig McLachlan story. TV and theatre star Craig McLachlan won’t be taking part in any more of the current theatre production of Rocky Horror Show, the producers have confirmed, after allegations of sexual harassment and indecent assault against him were revealed by Fairfax and the ABC yesterday (and more allegations in the Fairfax newspapers today, too). The producers of The Doctor Blake Mysteries — in which McLachlan stars and which was dropped last year by the ABC but then picked up by Seven for this year — have said the production is now on hold while the allegations are investigated. The ABC has said in a statement it has removed the show from its iview catch-up platform, and a planned re-run for January 25 has been called off.

The Holy War continues. The Australian is yet to let go of its Holy War against writer and activist Yassmin Abdel-Magied. She was the target of sustained coverage by the national broadsheet (and some other conservative media) last year, initially prompted by some controversial comments she made as a panellist on Q&A, and then fuelled by a social media post on Anzac Day saying, “Lest we forget (Manus, Nauru, Syria, Palestine)”. And the Oz has definitely not forgotten one of its favourite targets, ringing in the new year with yet another full article based on a social media post by Abdel-Magied. She made a joke on Twitter about the “African gang crisis” that’s been playing out in the media over the holiday period, and three days later the newspaper ran a story in the paper about the post under the headline, “Abdel-Magied mocks ‘convict Aussie’ gang fears”. 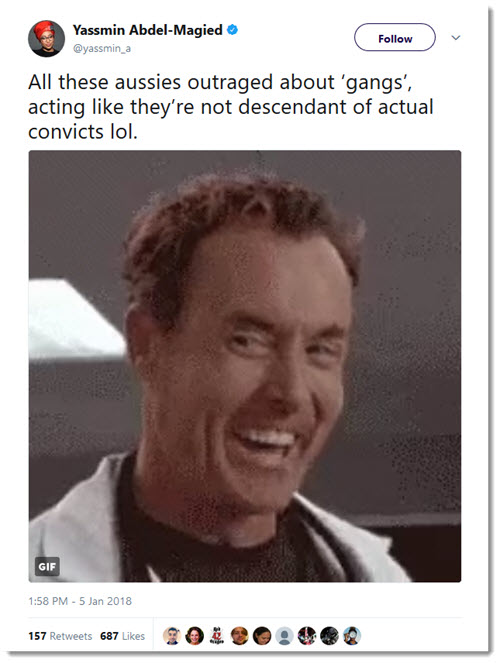 The revolving door. The ABC’s Queensland evening news bulletin presenter Karina Carvalho is moving to the public broadcaster’s news channel, where she will anchor the prime-time slot from 7pm to 9pm. Carvalho will host her last state bulletin on Thursday. Her replacement hasn’t yet been announced, but Louisa Rebgetz will fill in for the time being. Caravlho has presented the bulletin in Perth, and filled in as ABC New Breakfast co-host when Virginia Trioli was on maternity leave, before moving to Brisbane for the presenter role.

The Abdel-Magied is utterly moronic though. Like there’s any meaningful comparison between pinching a loaf of bread and raiding a service station with a machete.

Magied is obviously smarter than you. Do you think that bread pinching is all the convicts were transported for? I read the books held at Port Arthur pertaining to the convicts under their care. It wasn’t a pretty read. There were plenty of convicts who had done a lot worse than raid a petrol station with a weapon.

History is amazing. You should read some.

You’re obviously smarter than most if you can derive people’s intelligence from such a small sample of writing. And congratulations on your broad appetite for history research.
Nonetheless, given the Oz likes to report on the minutiae of Ms Abdel-Magied’s life, this was at least an instance of when what she was saying was plainly ridiculous. It helps nobody, certainly not the African community, to minimise or make false comparisons in relation to the very real crime problem in their community.

I must express admiration for such a low effort post getting someone mad enough to write about it in a serious newspaper for adults. Lovely work.

It wasn’t in a serious newspaper for adults. It was just the Australian.