Early exit. We’ve all seen the warnings about behaving yourself at the work Christmas party. But Ms Tips hears that a journalist from News Corp in Adelaide might not have heeded that advice, and has been sacked for inappropriate behaviour. At the party on December 8, held for staff from The Advertiser, Sunday Mail and the community Messenger papers, the journalist groped or tried to grope more than a couple of colleagues, as well as some other inappropriate behaviour. After a short HR investigation, they was shown the door. News Corp didn’t respond to Crikey’s requests for confirmation or comment.

Rocco’s modern life. Quirky conman Rocco Calabrese — who once set up a (haha) shell company to steal $82,000 worth of prawns — was a dab hand at fleecing honest Aussies. He has been described as “more slippery than an eel swimming in olive oil”  and, more laconically, a “bullshit artist”.

We hear now that the “eel” has wriggled his way back into work. A tipster tells us the decorated swindler is back in business, this time dabbling in the muscle car market. We hear as well that Calabrese (aka Rocco De Gonza) has allegedly got himself a fancy new moniker: Mark Cala. We’ve no reason to suspect he’s up to his old tricks, but we do reckon that if “Mark Cala” is indeed the old Rocco Calabrese, he could’ve been a bit more creative in the rebrand. We checked with Births, Deaths and Marriages and they’ve reliably informed us that “‘Fingers’ DeCiccio” is free and available.

War on gender-fluid Santa? In the latest, saddest attempt to pretend there’s a War on Christmas, and one that nicely ridicules the LGBTIQ community, the Herald Sun is reporting on a strange new attack from the pinko loonie Marxist left: a call for Father Christmas to be renamed “Person Christmas”. But a cursory look from Ms Tips at the Hun’s “evidence” (stolen from that bastion of rigorous reporting, meme-distributor Unilad) shows a single non-binary person tweeting about being Santa in October and one other tweet from March simply tweeting “Santa Claus is gender fluid”. La Revolution, this is not.

A further four seconds of consideration shows that a) no one is actually demanding a change to “Person Christmas” (a term apparently made up by Unilad) and b) the name would be “Parent Christmas” anyway.

But why would that stop the Today from running with it? 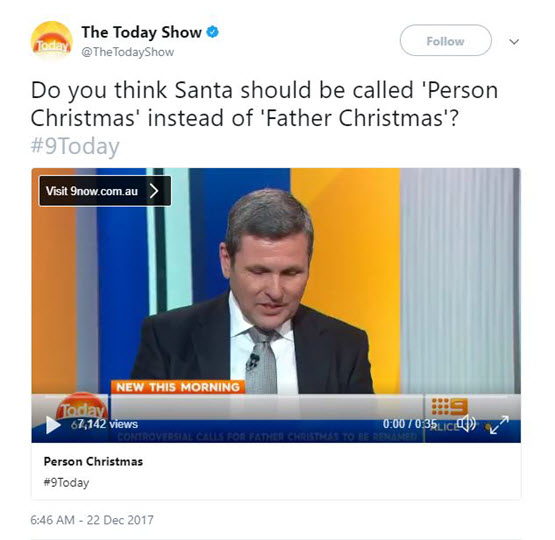 The today show’s version of clickbait

Chris ‘Limbo’ Uhlmann.
How low can you go?

Every year, The Wart On Christmas!

It occurred to me that what is happening to Chris Uhlmann at Channel Nine is a form of hazing, so appropriate to that blokey institution. “Hey, Uhlmann, you might have been some big shot over at the Trotskyite Aboriginal gay whale sheltered workshop, but you’re playing with the big boys now …” The kind of thing he has to do for the Today show is, after all, not unlike being forced to drink your own p*ss while having your junk smeared with boot polish.

The fate of Uhlman could easily become a weekly feature as he shreds, day by day, any semblance of credibility he may once have, undeservedly, had.
Hope he enjoys that big pile of money, rooster/feather duster springs to mind though toilet brush might be more appropriate.

Better still, the wrong end of the pineapple.