Lady Flo has died, apparently along with mainstream memory of the Bjelke-Petersens' legacy of hatred and corruption.

Former Queensland politician and famed lover of the pumpkin scone Florence “Lady Flo” Bjelke-Petersen died overnight. Nobody wants to speak ill of the dead, but you’d think you could “say something nice” about the wife of the Hillbilly Dictator without excusing his corrupt reign. And yet politicians of all stripes were quick to gloss over the fact of Sir Joh’s corruption, the fact he parachuted his wife, Flo, into the Senate, and also that whole “Fitzgerald Inquiry” thing.

Annastacia Palaszczuk called the Bjelke-Petersens “a loving couple and a formidable political pairing”. Deputy PM Barnaby Joyce listed the corrupt ex-premier as an inspiration. Sky News even dragged Campbell Newman out for comment. Prime Minister Malcolm Turnbull tweeted this morning that “Joh and Flo devoted their lives to Queensland and its success and dynamism owes so much to their vision and leadership”.

Presumably, “vision and leadership” here does not include Sir Joh’s attacks on First Nations people, the LGBTIQ community, police oversight, legitimate protest and democracy itself. Labor MP Tim Watts has been one of the few to speak out against the rose-coloured memories, tweeting a list of the former government’s greatest scandals this morning, including Sir Joh’s being charged for perjury and the fact openly homophobic policies forced nuns to smuggle Commonwealth funding for LGBTIQ services in brown paper bags: 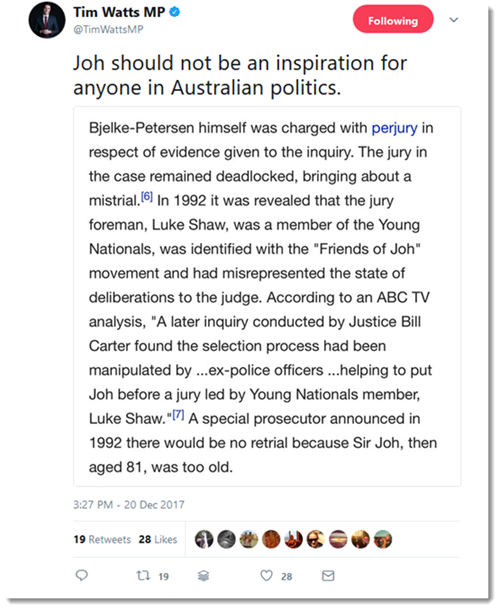 But hey, Flo sure did love those pumpkin scones!

She was very much part of what was a very corrupt system. I’m glad that she’s gone, and wish that she never was.

The dead do indeed deserve to have their rotten legacy aired in public, even the worst of people can still serve as a bad example….

Politicians glossing over historical corruption and anti democratic horrors, in the vain hope we will have forgotten, therefore nothing to see here in their own reprehensible conduct. Stating the facts re the dead is no problem to those of us that did so while they were alive.
Consider that the only mention of achievement is pumpkin scones, this should give some indication of the regard this person held during a considerable lifespan.

A pumpkin scone recipe is a valid legacy to leave the electorate compared to the nil (or negative) contribution by most politicians.

If 100 people were stopped in the street at random & asked to name a legacy from any former MP I suspect silence would reign.

Let the dead bury their dead.
This amnesiac, cant, maudlin carry-on is nauseating – a reminder of political hypocrisy and a selective, wilful ignorance of history.
Frecklington (in an interview with ABC TV news) said she longs for a return of the days of Joh?????
….. Just forget the past and it will repeat?