Bauer Media has cut Men's Style magazine after a horror year for the publisher. The summer edition will be its last.

Bauer cuts Men’s Style. Bauer Media has cut another of its magazines after a horror year for the publisher. The struggling German publisher has confirmed that Men’s Style‘s summer edition will be its last, but would not say how many redundancies the closure would lead to. Bauer bought ACP Magazines five years ago, and this year alone has closed Rugby League Week, Shop Til You Drop, Yours, Recipes+ and Homes+. It’s also restructured and pushed through redundancies, and lost a CEO, senior executives, editors, and a record defamation case to actress Rebel Wilson.

Triple M to air Australia Day music countdown. Triple J announced it was moving its Hottest 100 countdown from Australia Day out of respect for what the day means to Indigenous Australians, with a considered statement detailing the event’s history (including that it has not regularly been on January 26 for more than a few years). The countdown will now be held on the last weekend of each January. But commercial rock and sport station Triple M has decided to step into the void by running its own “Ozzest 100” on January 26 — a countdown of 100 Australian songs. It announced the new countdown in an email to subscribers, saying, “So, the taxpayer funded FM has decided that there’ll be no soundtrack for Australia Day. Let’s face it, that’s usually full of hipsters or kids making music on a Mac. At Triple M, we’re going to give you what you’ve asked for. The perfect Australia Day soundtrack.” The new countdown will no doubt be welcomed by the usual suspects — including Communications Minister Mitch Fifield — who have had a whinge about Triple J’s decision.

What it’s like to work for a sport-owned newsroom. A growing trend in sport reporting is for leagues and codes to have their own newsrooms to produce their own content about the sport. In the US, the NFL has its own media arm, and a former online producer has detailed her experience as a reporter for its newsroom in Deadspin:

Our most sensitive day was Black Monday, when the regular season ends and coaches get axed. Just as NFL Media had an internal hierarchy, our reporting had one as well. To me, it felt like we could say more or less whatever we wanted about the players, but news connected directly to the owners — things like hiring and firing head coaches — was treated as extremely sensitive. Before Black Monday, [we were reminded] that we had 32 bosses; these were, as you’ve probably gathered, the NFL’s owners. 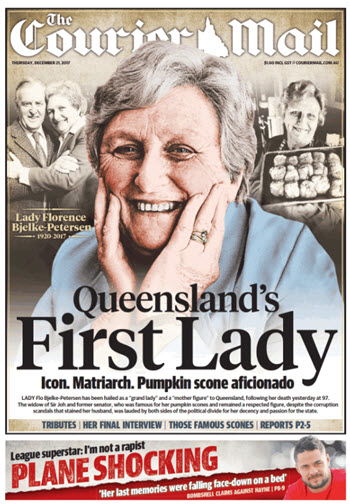 ABC extends PNG and Pacific programming. The ABC will launch an extended morning program on Radio Australia for listeners in Papua New Guinea and the Pacific next year. The live weekday news, talk and entertainment program will be hosted by Seini F Taumoepeau and Tahlea Aualiitia. The new program will incorporate Pacific Beat, a regional news program on the network.